Day 6 – The day the body begins to scream at me. That first step out of bed in the morning is always interesting, but I’ve been pretty lucky this go round. I slept like a rock in the Monkey House and stopped over to Sparky’s before we left to bid him a farewell. In true Sparky fashion, he was off to speak to high school students. Lucky kids.

Before leaving Taylor, we had to stop and get a picture at Taylor Grocery & Restaurant. Unfortunately, the restaurant is only open a few days a week, so we were not able to enjoy their delicious catfish. The restaurant is a destination for many, and I thanked my father-in-law Tim Bell for his donation. Tim would absolutely love this place.

In my last post, I noted the greatness of Oxford, Mississippi. Every Oxford I’ve come across has been incredible. I told dad that he needs to rent a place in town for a month during the winter. I’m going to continue to push him to do so, as I know mom and dad would love living here for awhile. If you visit the Oxford Square, you’ll understand why people of all ages love the town. With the stately old courthouse in the middle of the Square and shops, restaurants, coffees shops, and bars surrounding it, the Square is the hub of life in this town. I took the opportunity to thank the Etlers once again for their donation.

One thing that I love about Oxford is its love for books and reading. Many authors have made Oxford home (William Faulkner, John Grisham, etc.), and books are a way of life here. On the Square alone, the famous Square Books attracts many to their shelves. Two other Square book store branches are located on the square. That’s right, three independent book stores on one college square. One could get lost in any of the three.

From Oxford, we drove west to Clarksdale, Mississippi, a Mississippi Delta city that has been home to many blues musicians. The Delta Blues Museum is located in town, so I had to find something blues-related for a thank you sign. I found this great mural in the parking lot where we parked, and I thanked Fred Reimer for his donation. Fred is a Phi Delt from Gettysburg College which is a great place to go to school or visit! Fred is living in London right now as an expat. I’m envious.

Also in town is the Ground Zero Blues Club. Morgan Freeman is from Clarkdale and is owner of the restaurant. I was hoping for some type of Freeman monologue on repeat through the outdoor speakers, but the blues music was a nice backup. I thanked Andy Tu again for his donation. It was probably too early to grab a cocktail, but I felt like I needed one. 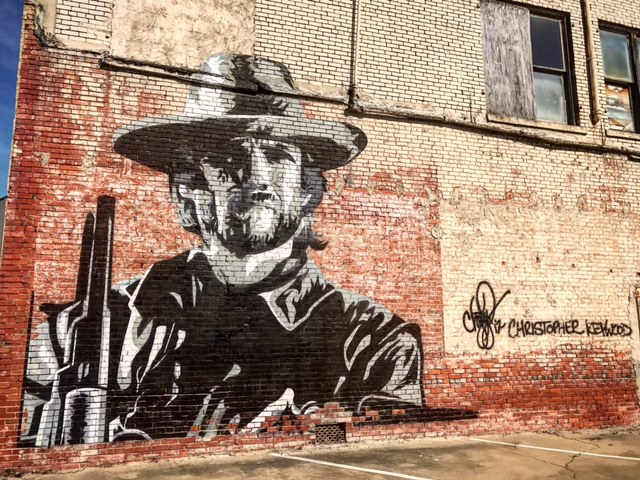 From Clarksdale we continued west to Cleveland, Mississippi, the home of the new Grammy Museum. Yes, those Grammys. I love arriving to a town and stumbling upon something really great that I had no idea would be there. This was a great example of this feeling, and it even had Grammy-winning hits playing from the speakers. I thanked Andrew McGuire again for his donation.

Cleveland is also home to Delta State University that can claim probably the greatest mascot in the land – The Fighting Okra. Seriously, don’t even try to think of something that compares, because it’s not out there. Look at that sign and tell me you don’t want a t-shirt. I thanked Keith & Sue Berg again for their donation. After nearly losing dad in town (my cell phone reception hasn’t been the best), and I decided against an out and back running route, we headed south. 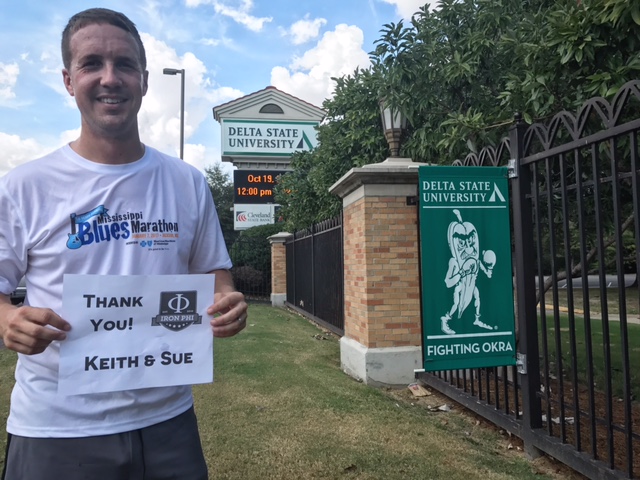 Just down the road is Sunflower Country and Indianola, Mississippi, the home of blues legend B.B. King. As mentioned before, I nearly had a run-in with Mr. King in Dubuque, Iowa, where I stayed next to him in a hotel. I enjoy his music occasionally when I’m in the mood for the blues. B.B. is now buried at his museum in Indianola. I thanked fellow Phi Delt Ryan Flynn in front of the B.B. King Museum. Ryan lives in the Twin Cities, and I know he’s staying busy with his little dude. Thanks Ryan!

During my run, I passed B.B. King’s favorite corner where he was discovered as a musician as well as this great mural of the King.

I also came across a classic Mississippi truck and then met dad for one of our best meals of the trip – The Crown Restaurant.

We explored much of the Mississippi Delta today, and if you have never been, it’s culture is so distinct. I love the south, and I like to play Southerner when the opportunity arises. The Mississippi Delta has been called “The Most Southern Place on Earth.”The Delta was developed as one of the richest cotton-growing areas in the nation before the American Civil War. When many think of Mississippi, they are thinking of the Delta. Its history has had challenges, both economically and racially, but it has produced so many of the things we love – blues, jazz, amazing southern food, etc. I had never been through the Delta, but it was an absolute treat. I even saw the Delta Dogs roaming the towns.

From Indianola, we decided that we need to alter the route from the original plan. We would miss Yazoo City and Jackson to get over to the Mississippi River and down to Vicksburg before dark. You may notice the shirt that I’m wearing in these photos. John Noblin, the Director of the Mississippi Blues Marathon was kind enough to send the shirt to me. He also sent a great running hat as well. I’ve been wearing that a lot during my training, but I forgot the darn thing in Iowa. It would have come in handy throughout this trip. Thanks John!

Greenville, Mississippi was not originally on my list, but I had a great time running on the levee in town. As you can imagine, levees have been very present throughout this trip as cities do what they can to keep the water away. When the water is normal, these levees can be imposing. I thanked Jason Brannon again for his donation.

Dad and I thought that we would spend the entire day in Mississippi, but our re-route took us back into Arkansas and Louisiana. Why not, right? Driving through Panola, Louisiana, I found this amazing Runner’s Choice opportunity. I’ve never had Panola hot sauce, but I’m sure it’s great. They’ve outdone themselves with the roadside sign. I thanked Ira Blatt for his donation. I just met Ira for the first time in September, but he is one of the Fraternity’s great volunteers in the New York City area.

One of my favorite moments of the day came in Tallulah, Louisiana. Dad and I pulled into a parking spot at the courthouse, and a gentleman who was just leaving the building approached us and mentioned that we looked lost. It was probably a combination of our New Jersey rental car license plates, windblown faces and hair and stench of sweat and coffee coming from the car. Southern hospitality is a real thing, and this gentleman made sure we knew where we were going, had a great dinner recommendation, informed us about his hometown/residence and even equipped us with two maps. And what are the odds that he spent time in high school in Spencer, Iowa as an exchange student? Truly a treat to run across this fine fellow. 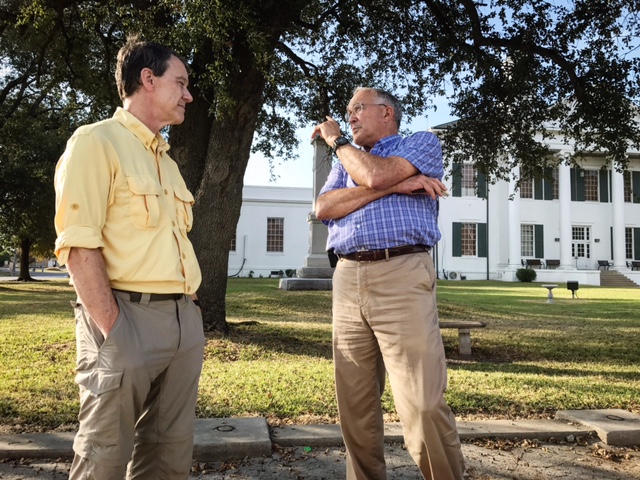 Our final destination for the day was Vicksburg, Mississippi, a prominent city with much Civil War history. The capture of the Confederate river fortress at Vicksburg, Mississippi on July 4, 1863 was a major turning point of the Civil War. Today, many history buffs flock to this charming river city to learn more about our country’s history. Two minutes into town at a rest stop, I found the perfect opportunity for a cannon shot. One of my best! 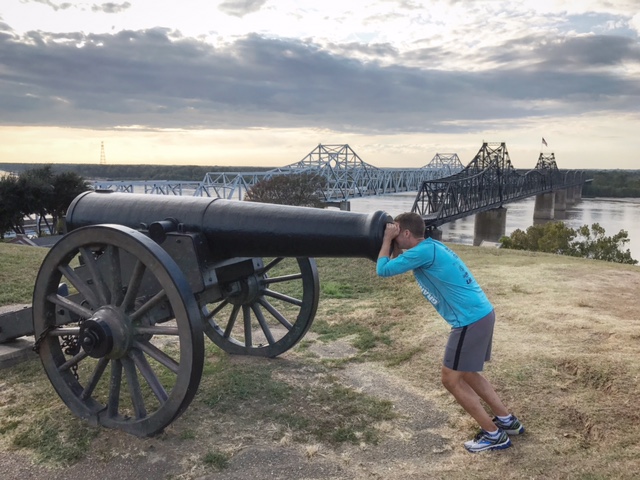 A beautiful view of Louisiana from the Vicksburg bluffs.

Before checking in to our place, I needed to get one more run out of the way. Our pal over in Tallulah, LA made sure that we knew to visit the Vicksburg National Military Park. Wow, what a place! The park offers a 16-mile driving tour and you can always find runners and cyclists venturing through the park’s hills and monuments. Dad and I would do the drive the next morning, but I finished the day strong with a two-miler. I thanked Chris Shrader once again at the park.

This picture does not do the park justice, but rounding a curve, these magnificent hills appeared with a grand building in the distance. A great run!

Dad and I ventured back into downtown Vicksburg to explore a bit. Nestled on the side of a hill, the community is great and it filled with old architecture, neat shops, great restaurants and river culture. We found this great building on the riverfront, and I thanked Mike Hyatt again.

Along the river are panels of murals, a touch that has become very popular in many of the river communities that we’ve visited. Obviously, I’m a fan.

I thanked my buddy Mike “Scar” Scarlatelli in front of a mural that included Teddy Roosevelt and his crew. I can picture Scar on a horse next to these fellas. Scar is the Warden for Phi Delta Theta, the guy who brings the order. Thanks Scar! 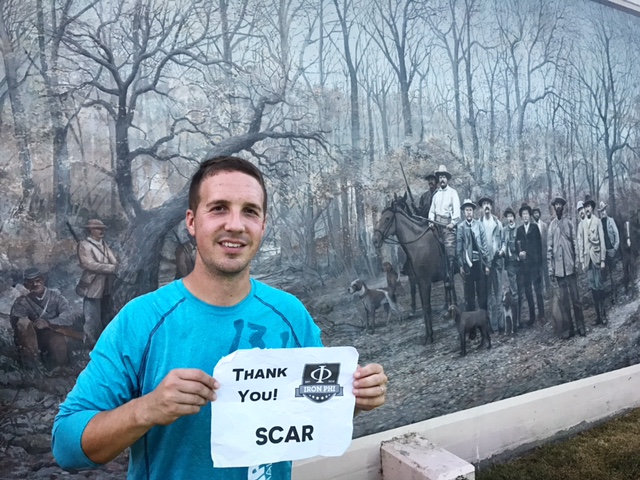 Our lodging for the evening was incredible. I connected with H.C. Porter on Airbnb leading up to the trip. She rents out an entire floor apartment above her art studio in Vicksburg. Here’s the greatest thing about Airbnb. You build reviews through your stays. If you are respectful of other peoples’ properties, you get good reviews. When you have good reviews, you can show up in Vicksburg and be handed a key to the gallery for an amazing overnight experience! I love that trust is the bedrock of the platform.

The apartment is ~2,200 square feet and it filled with fun art and sculptures. I FaceTimed with my kids and they LOVED seeing all the art.

It even has its own rooftop to enjoy the Vicksburg weather. A simply stunning apartment. Thanks H.C.! 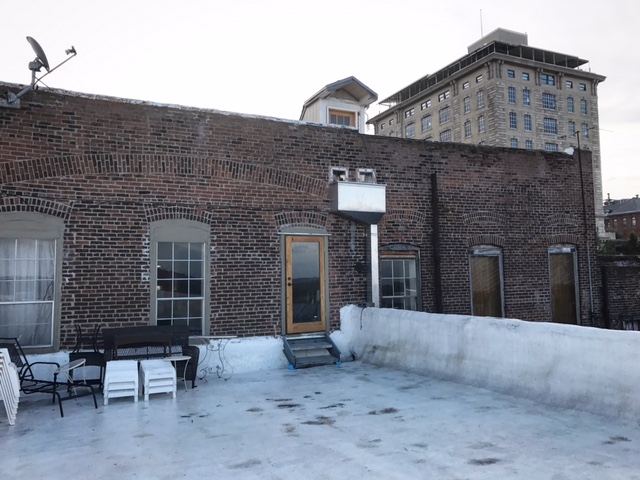 We celebrated the day with an amazing dinner at Rusty’s down the road from where we were staying. Gumbo, an oyster po’ boy, a local beer and Mississippi Mud Pie. Does it get any better?