Tuesday started bright and early. I have a really tough time sleeping on these trips. It’s probably a combination of adrenaline, constant movement, soreness, and new places each night that cause this. Surprisingly, I generally wake up very refreshed, but it was a little different at 4:15am on Tuesday morning. I’ve been battling a lingering bronchitis cough throughout the trip, and it caused me to wake up (and stay up). We planned to leave St. Louis at 6:00am, as we wanted to hustle all the way to Oxford, Mississippi in order to spend as much time there as possible.

Before leaving Dogwood, I added our pin to Kara’s awesome guest map in the apartment. 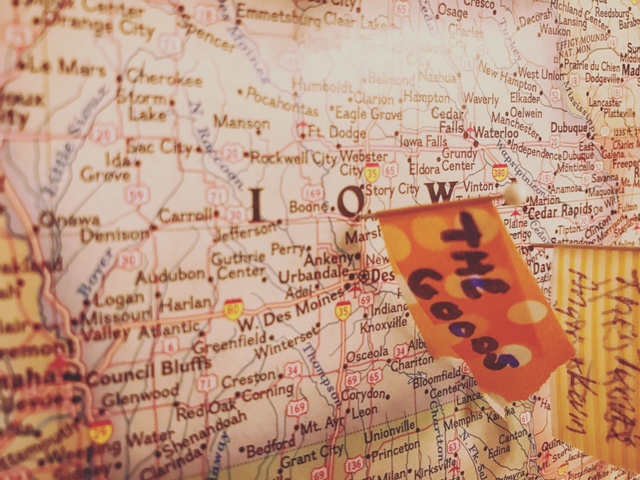 The day would incorporation 450 miles of driving and 7 miles of running. When planning the trip, this section of the river was definitely the toughest to plan. The river snakes through five different states, and the roads get a bit tricky. The confluence of the Ohio and and Mississippi rivers has produced great floods over the years, and the elevation is very low throughout this region. Because of this, cities are bit more spread out and there aren’t as many thriving cities on the river as there are to the north. We would be spending more time on four-lane highways today than any other day. 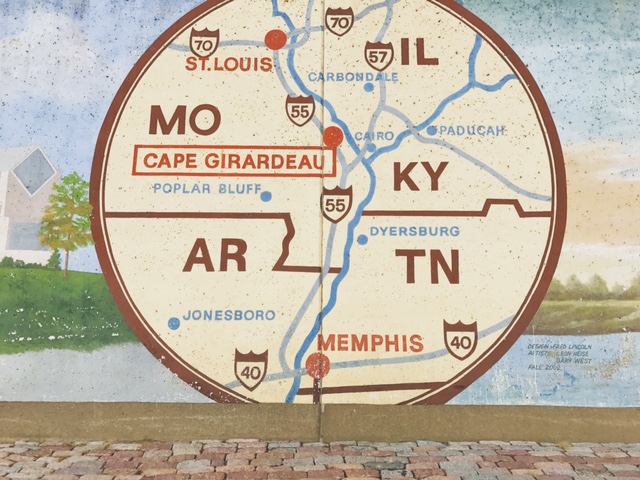 The goal was to arrive in Ste. Genevieve, Missouri at sunrise, and we were successful. Ste. Genevieve is Missouri’s oldest town. It has French Colonial architecture and a very unique square in the middle of the town. Its narrow streets and fenced gardens surround some of the most significant eighteenth century architecture in the nation. I thanked my former colleague Kerrie Herren. Kerrie lives on the other side of the state and works as a principal in northern Kansas City. We lived together in Oxford, Ohio for a year. 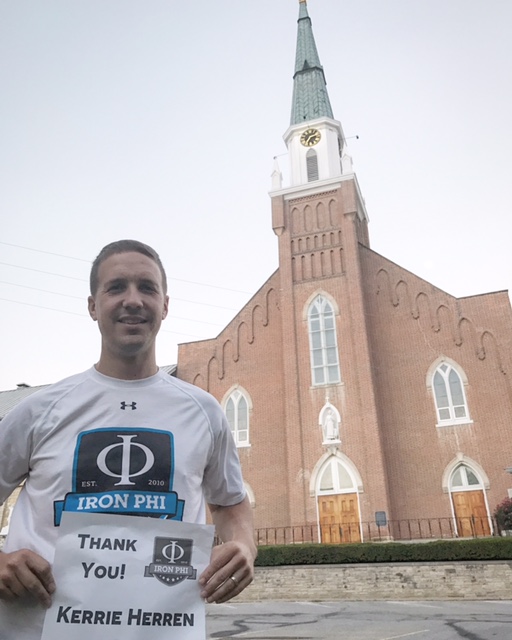 There are many historic bed & breakfasts in Ste. Genevieve. I ran past one that I found quite unique and thanked Dan Weiss. I spent two years after college traveling the Northeast region of the U.S. and part of Canada as a consultant for the Fraternity. Dan was a leader at one of our newest chapters at the University of Hartford. He was one of my favorites on the road, and we spent a lot of time laughing. He now owns a toy shop in NYC which I think is quite awesome.

I really enjoyed our next stop – Cape Girardeau, Missouri. Numerous murals commemorate the city’s history. The largest is the Mississippi River Tales Mural, located on the city’s downtown flood wall. Covering nearly 18,000 square feet, it spans the length of the downtown shopping district and features 24 panels. Behind the flood wall lies the Riverfront Park where riverboats dock and visitors can view the Mississippi River. I enjoyed a scenic run along the river. The murals kept me occupied as I ran. I thanked Brad & Mindy Carlson once again for their donation.

Southeast Missouri State University is located in “The Cape,” and it was interesting to see how the college and the old downtown transition into each other. I imagine that the setup has created some nice synergy as the city has grown. I found this building downtown. I’m still not exactly sure what it is, but I thought it was striking. I thanked Mike Hyatt again for his donation.

Our next stop was one of the more interesting stops during the trip. Cairo, Illinois sits directly at the confluence of the Ohio and Mississippi river that I mentioned earlier. 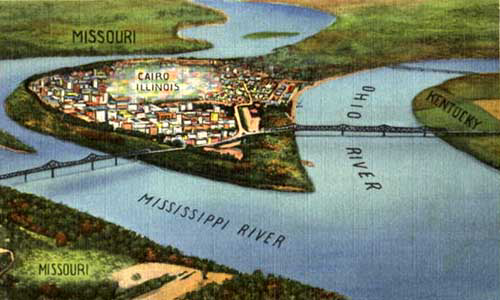 In 2011, it was hit very hard by a flood, a storm that had called for a complete evacuation of the city. I’m not sure it has ever recovered. Cairo feels and looks like a ghost town. Yes, there are some people around, but the town was very eerie. Despite the state of Cairo, I found great joy in thanking my favorite Egyptian Mike Wahba in a place named Cairo. Mike and I work together, and he is living the good life in Cincinnati right now. I enjoy following his adventures in my former city. Thanks Mike! 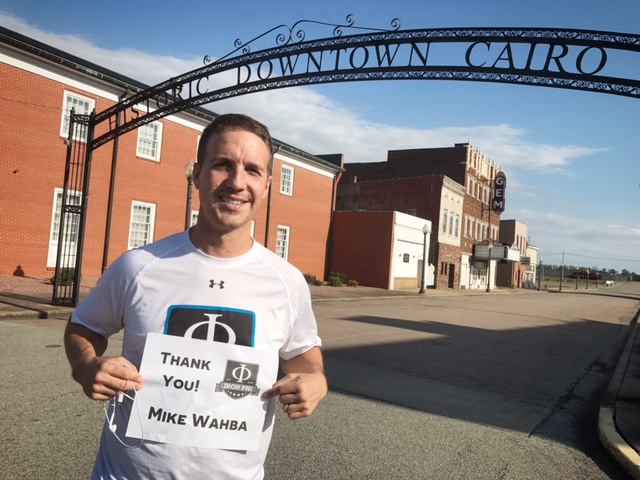 One of the levee walls in Cairo noting its continual fight with the waters. It’s almost impossible to imagine water this high when standing next to the wall. 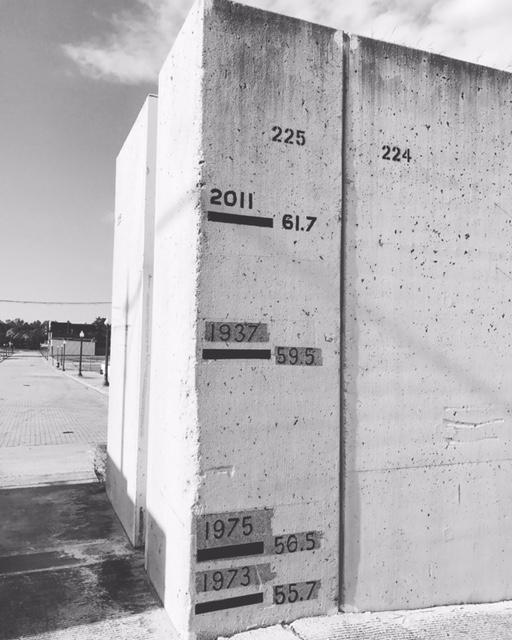 From Cairo, Illinois, we crossed the Ohio River into Kentucky for the first time during the trip. Wickliffe is the county seat of Ballard County and is just west of Paducah, Kentucky. I had to incorporate Kentucky into today since we were so close. I love the state of Kentucky, and I believe that it’s one of the most underrated states in the country. I thanked Keith & Sue Berg again for their donation. 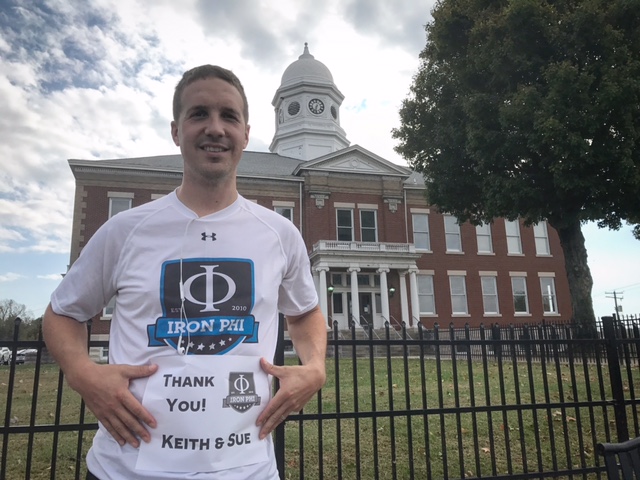 We crossed back over the Ohio River and then the Mississippi River to get to New Madrid, Missouri. New Madrid was the site of a series of more than 1,000 earthquakes in 1811 and 1812. New Madrid lies far away from any plate boundaries, but it is on the New Madrid Seismic Zone, an area that has the potential to produce large earthquakes in the future. Since 1812, frequent smaller earthquakes have been recorded in the area. Earthquakes that occur in the New Madrid Seismic Zone potentially threaten parts of eight American states: Illinois, Indiana, Missouri, Arkansas, Kentucky, Tennessee, Oklahoma and Mississippi. I thanked Brendan & Steph Cunningham while in town. Brendan is a former colleague, and I was able to cross paths with him last month in New York. 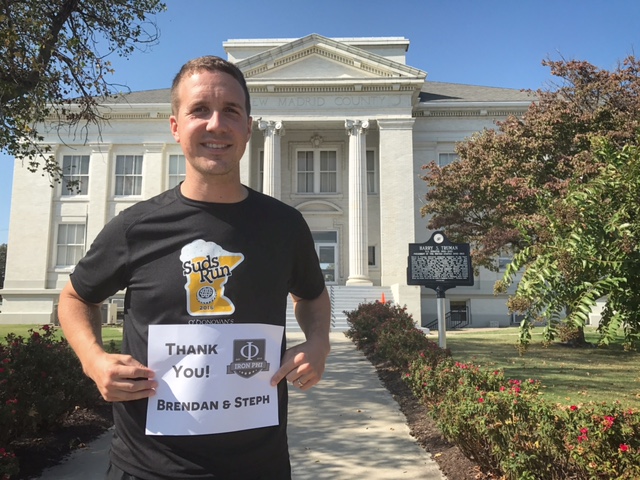 I made it to Arkansas for the first time! Osceola, Arkansas was the destination, and it is the county seat of Mississippi County, a county that claims to be largest cotton producer in the world. We tried verifying the claim, and a local painter reassured us that if it says it on the sign on the square, it must be true. Osceola is also famous for its role in the development of blues music, and many famous blues musicians either came from Osceola or performed there. I thanked Jamison Arends again in front of the copper-topped courthouse.

Dad and I have thoroughly enjoyed learning about cotton production during this trip. As corn and beans guys, trying to figure out what is planted on the side of the road is a fun car game. You don’t have to be an agriculture major to know what a cotton field looks like. We began to see cotton fields popping up around this area. I found a cotton-themed mural in town and thanked Andrew McGuire again. 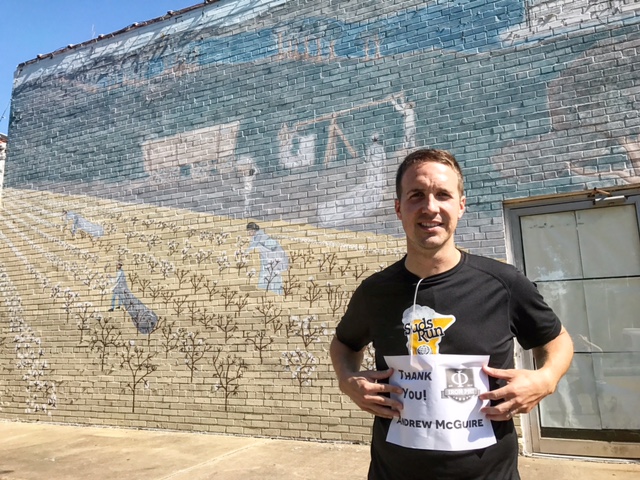 Here are a few fun facts about cotton (found on this website):

We couldn’t resist capturing a good picture on a cotton farm, so we pulled off to the side of the road and did the job. I thanked my sister and brother-in-law again for their donation. Dad even grabbed some left-behind cotton in the fields to take home as a souvenier.

Our next stop was the big city – Memphis, Tennessee. Memphis is very manageable for a big city and has many sites and attractions that could fill an entire weekend. We made great time getting there, so we took the nickel tour of Memphis in the car and briefly on foot. Coming into town, you can’t help but notice the giant pyramid. The pyramid used to be the home of the NBA’s Memphis Grizzlies before the FedEx Forum was built.

In 2015, the Pyramid re-opened as a Bass Pro Shops “megastore,” which includes shopping, a hotel, restaurants, a bowling alley, and an archery range with an outdoor observation deck at its apex. I don’t fish or hunt, but I’m a fan of the Bass Pro trucker hat. It doesn’t make a whole lot of sense, but it works. I wanted to pick up kids’ hats for Cal and Tess, but they were out. Bummer. I thanked my cousins Adam & Lindsey Good for their donation. My family joined Adam’s and two other families for a fun trip to the Wisconsin Dells this summer. We had a blast and are thankful for having the opportunity to join them. 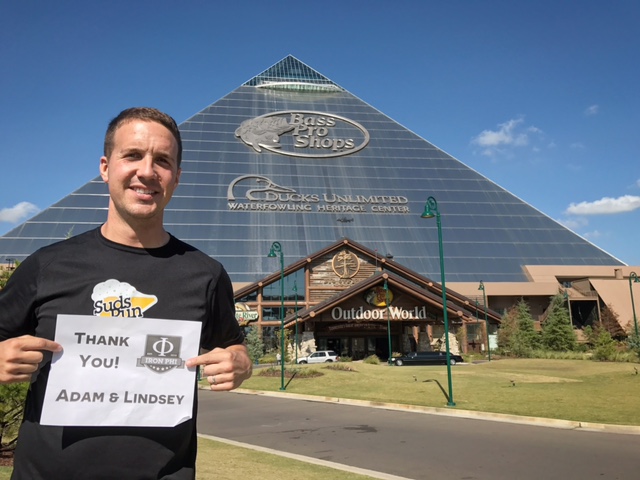 The most popular street in Memphis is Beale Street, filled with BBQ, other restaurants, people and bars. Beale Streets was calm when we arrived, but it gets pretty rowdy at night. I thanked Jason & Jadee Purdy. Jadee is Tillie’s oldest sister, and she lives in Tampa with Jason, their daughter Alaina and their two greyhounds. With Air Force backgrounds and employers, the two of them move fairly often. Tillie and I visited their new place in Tampa this summer on the way to Savannah, and we saw the family in September for a wedding. 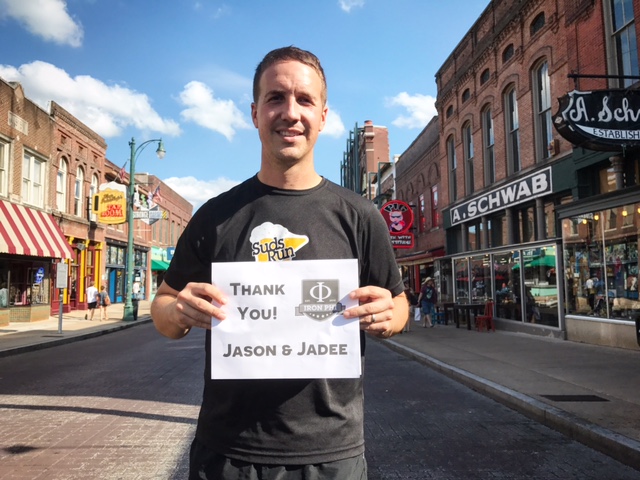 We popped inside the Peabody Hotel to see the ducks, drove by the National Civil Rights Museum built around the infamous Lorraine Hotel, grabbed some coffee, drove past Sun Studios. I found this mural along the way that represented the day quite nicely.

Our final stop in Memphis was the Rick Pudwell Horticultural Center at the Memphis Botanical Gardens where I thanked Sean & Michelle Wagner. I have worked with Sean during my entire tenure at Phi Delt, and he made the donation to honor his relative Lara Pudwell who has served Phi Delta Theta as the Faculty Adviser at Valparaiso University. The Rick Pudwell Horticultural Center is named after her father. Pretty awesome. 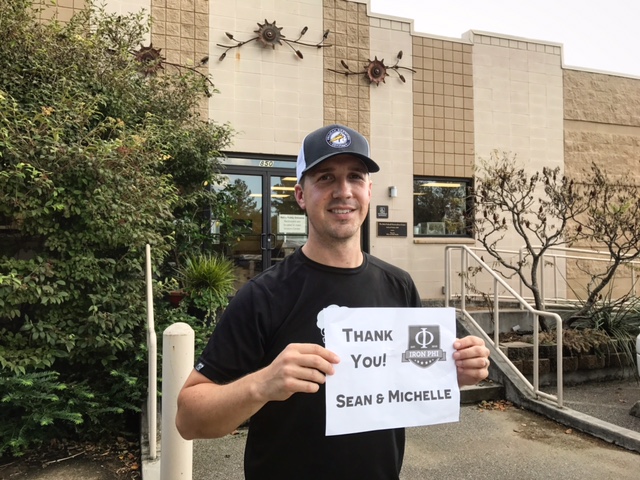 From Memphis, we traveled south to Oxford, Mississippi where we would lay our heads that evening. Oxford is one of the best college towns in the country (Ole Miss), and we stayed with the Dean. Sparky Reardon was the long time Dean of Students at Ole Miss, and he has been a mentor of mine for a number of years. In retirement, Sparky moved to a wonderful (and very peaceful) community in Taylor, Mississippi, about 10 minutes from campus. His house is perfect (and so Sparky), and it will be a wonderful place for Sparky to relax. I think he deserves it. I imagine the giant porch will probably get a little bit of use. 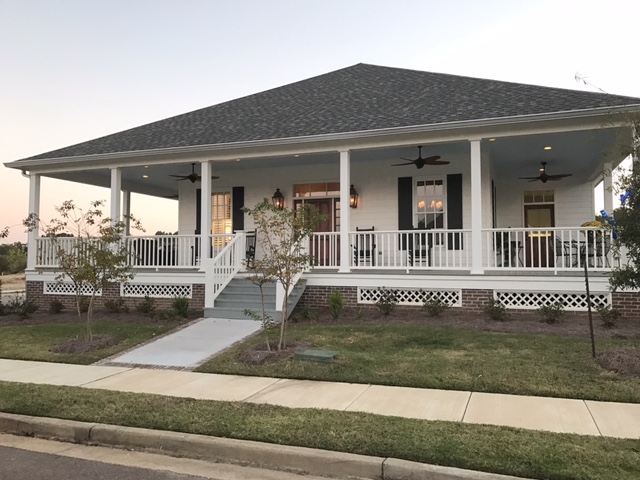 Sparky informed us about the Plein Air community where he now lives, and I was able to meet the man who built the community. In addition to houses, the community has a chapel, reception venue, outdoor concert area, restaurant and is expecting a coffee shop soon. It’s very peaceful, and Sparky’s best bud even lives across the street for him. The good life right there.

A look at the community’s chapel. 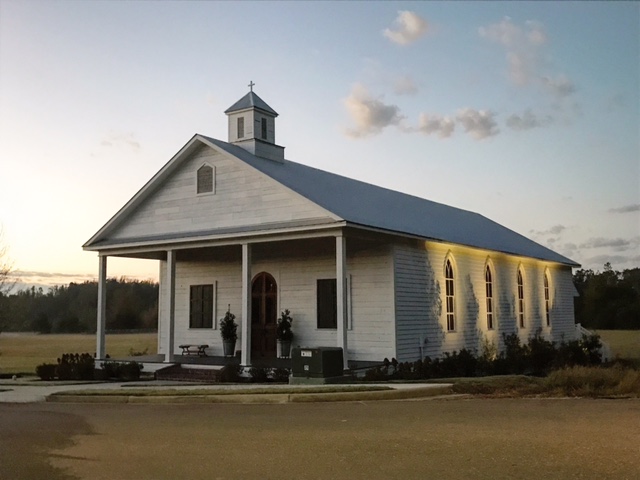 Dad ended up staying in the guest room at Sparky’s house, and I stayed in the community’s “Monkey House” that can be reserved for guests in Plein Air. 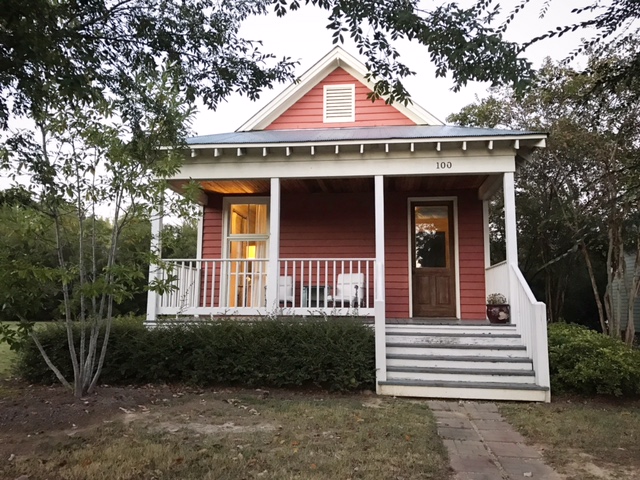 This bed was calling my name, but we had dinner plans. 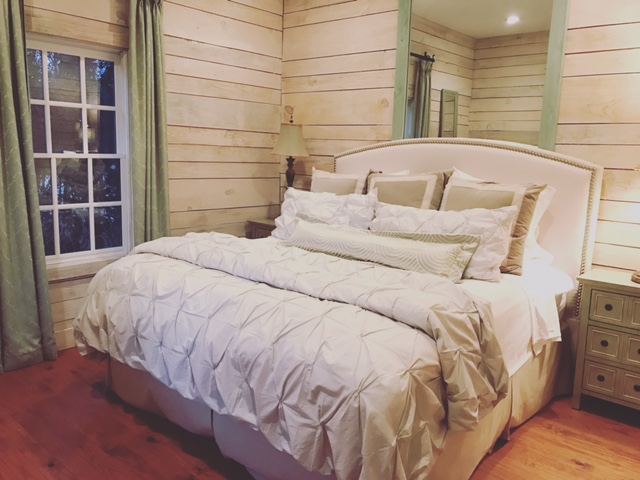 Oxford really is a unique place. You quickly understand why it has become so popular, and it was great to meet a few friends at Ajax on the square for dinner. From left to right, William Kneip, me, dad, Matthew “Porch” Porchivina and Sparky. William and Porch are both recent graduates of Ole Miss who live in Oxford. I get the sense that they like it there!

We called it a night after dinner. I normally spend a few hours in the evening writing my blog post, but I was spent on Tuesday evening.