Day 4 promised a glimpse into the life of Mark Twain as we traveled from Davenport, Iowa to St. Louis, Missouri. The day’s journey would include approximately 350 miles in the car and mile runs in eight different cities. We have learned that no matter the distance each day,  we usually arrive at our final destination just in time for rush hour. The rigor of the day naturally affects our sense of urgency as we navigate the day’s route. We had no obligations this evening, so today felt relaxed. We left Davenport around 8am and headed towards our first destination – Muscatine, Iowa. 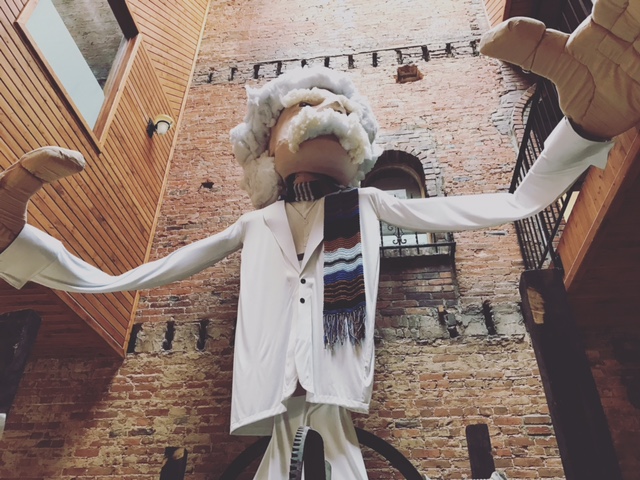 Fun fact – The name Muscatine is unique in that it is not used by any other city in the United States. It is also known as “Pearl City.” A German immigrant founded a pearl button company in Muscatine in the late 1800s, and he produced buttons that looked like pearls by machine-punching them out of freshwater mussel shells harvested from the Mississippi River. To celebrate this ingenuity, I thanked Taylor and Haley Abel in front of a great mural in town. Haley is another one of my adopted Griffith sisters, and I hope to meet her newborn over the holidays. They live in Iowa City. 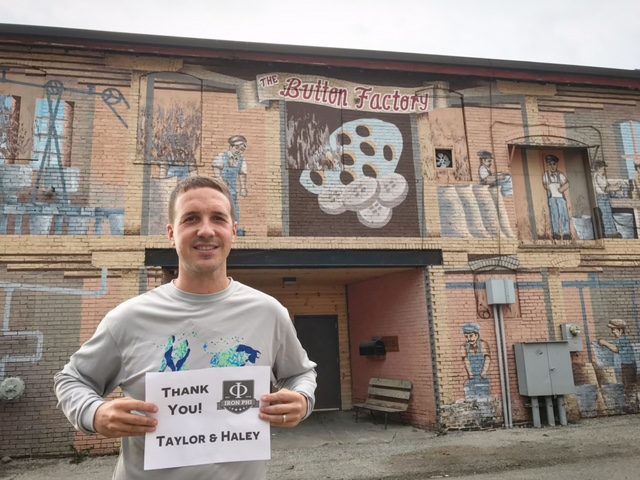 Let me tell you about another fun Muscatine historical fact. From the 1840s to the Civil War, Muscatine had Iowa’s largest black community, consisting of fugitive slaves from the South and free blacks who had migrated from the eastern states. One of the most prominent community leaders was Alexander Clark Sr. In 1868, he successfully desegregated Iowa’s public schools by suing the Muscatine board after his daughter Susan was turned away from her neighborhood school. Eleven years later, his son Alexander Jr. became the first black graduate of the University of Iowa College of Law and its first black graduate from any department. Clark Sr. went to the college and became its second black graduate five years later, despite being 58 years old, saying that he wanted to serve “as an example to young men of his own race.” Clark rose to prominence in the Republican Party, serving as a delegate to state and national conventions. What a story!

From Muscatine, we continued south to Burlington, Iowa. Burlington was a bustling river port in the steamboat era and a central city to the Chicago, Burlington and Quincy Railroad. The “Burlington Route” merged into the Burlington Northern Railroad, which in turn merged into the BNSF Railway. Burlington is also home to the world’s crookedest alley in the country if you forget about that tourist trap in San Francisco. Snake Alley is a windy road that is similar to Lombard Street in San Francisco. A little less steep but much greater character. I may be biased. After making the mistake of running down Snake Alley and back up it at the end of my run, I thanked Taylor and Haley Abel again.

I ran past a number of stately old houses in Burlington, and I found this guy guarding his residence.

Before leaving Burlington, we had to capture a photo of the town’s distinguished bridge that leads to Illinois. There are so many great bridges along the Mississippi! I thanked Mike and Cathy Mores. Mike is an Iowa State Phi Delt and Cathy has contributed to my blog showcasing Manhattan, Kansas. The two of them just completed a running relay on part of the Minnesota route that we just completed.

Our next stop was Fort Madison, Iowa, home of a place you don’t want to end up – The Iowa State Penitentiary. I am fully aware that prison is not a good thing, but wow, that building is impressive. Dustin, you got a prison as your thank you sign, but you know I love you. Here’s to hoping that I get to visit the other prison during basketball season – Phog Allen Fieldhouse.

Fort Madison has the last remaining double swing-span bridge on the Mississippi River, the Fort Madison Toll Bridge. It has a top level for cars and a bottom level for trains, and it is also the world’s largest. 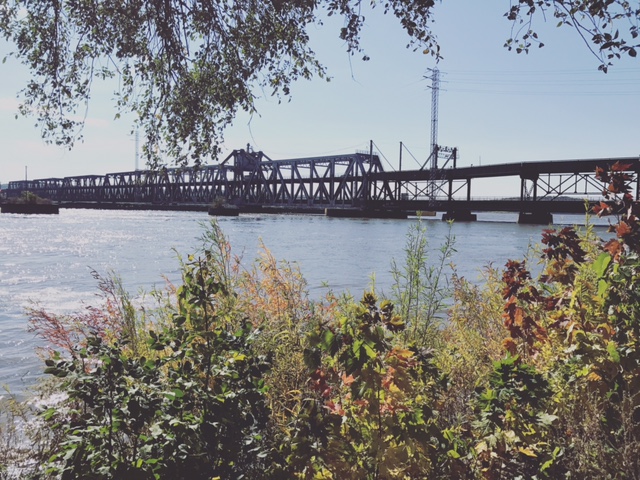 I got a little creative in town with a picture that I think truly depicts an old Mississippi River town.

As a native of Fort Dodge, Iowa, I am a proponent for other Fort towns. On the river in Fort Madison sits an old fort that today provides great history. I took the opportunity to thank my mom and dad who have given me so much in life, including a great childhood in a fort town. I’m a lucky guy, and I am thankful to have them a mile from my house as Tillie and I do our best to raise our children. 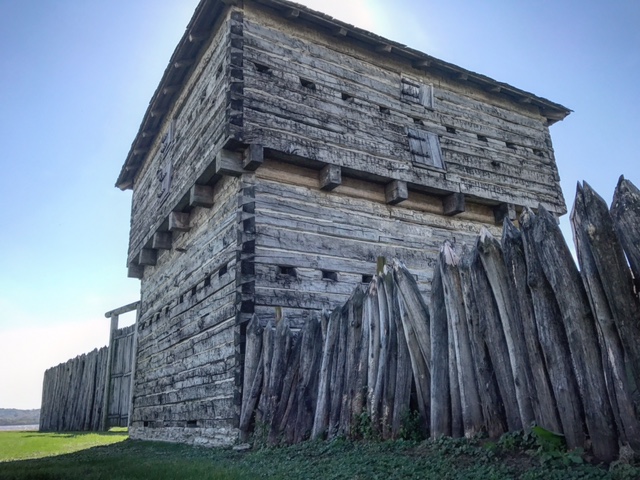 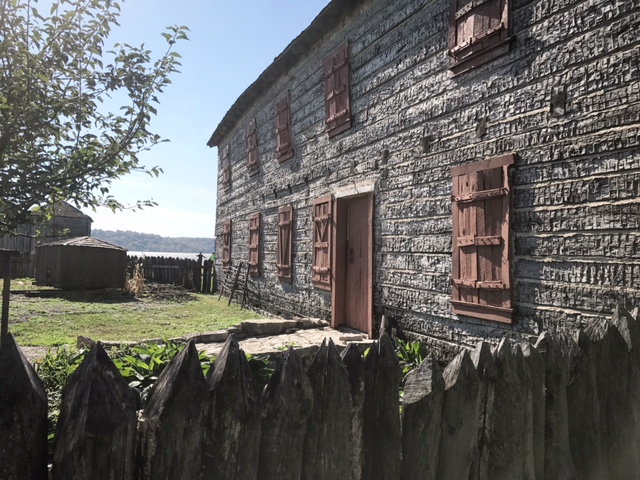 We crossed over to the Illinois side of the river and traveled south to Nauvoo, Illinois. The Mormon trek is very intriguing to me, and Nauvoo was the location of one of the largest Mormon settlements in the country. Eventually, the crew headed west to Salt Lake City, but the town continues to draw many visitors and celebrates its Mormon heritage. It is a hot bed for tourism, and the Mormon Temple in town is quite amazing. As I headed out for my run, I told dad to tell the guys at the door that he was interested in their religion in order to get a sneak peek of the place. He was unsuccessful in the venture. I thanked Jamison Arends at the temple. Jamison is one of my favorite students to come through Iowa State, and he is now doing great things at Amazon in Seattle. 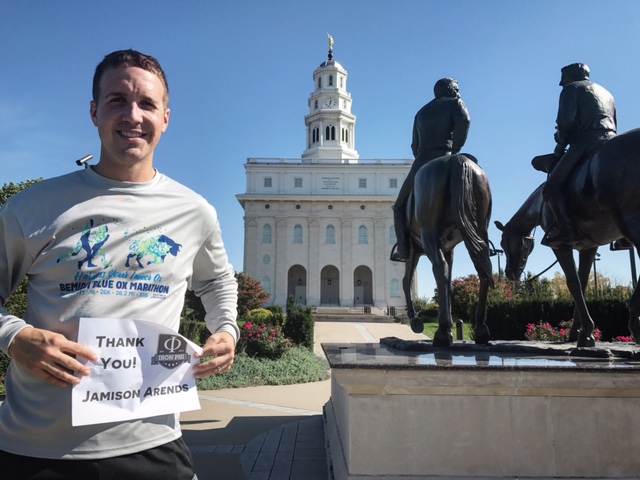 Another shot of the temple. 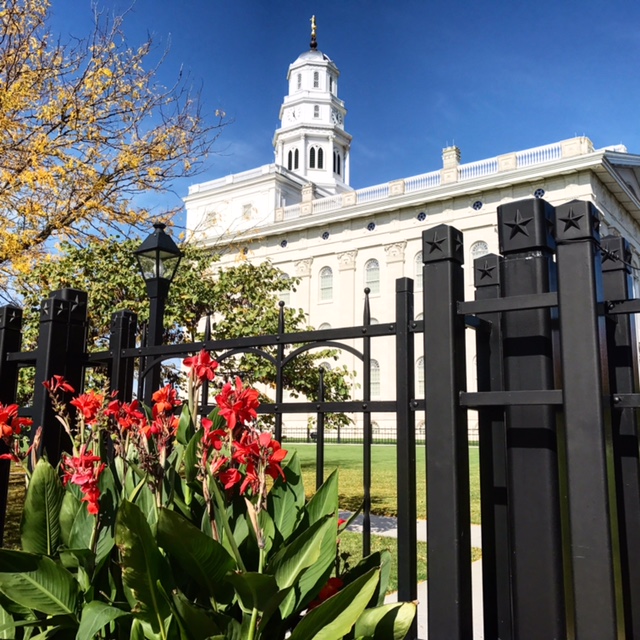 I found an old Bull Durham mural during my run in Nauvoo. Have you ever seen a cow so excited for a smoke?

The John Smith statue in town.

From Nauvoo, we continued south to Keokuk, Iowa. Keokuk sits at the very southeastern tip of Iowa. Fun Fact – Keokuk and Fort Madison are both county seats of Lee County, Iowa. Lee County is the only one of Iowa’s 99 counties that has two county seats. Don’t ask, it’s complicated. Keokuk is known as “Power City” because of its iconic power plant on the river. I thanked my old pal Brad Carlson and his wife Mindy in Keokuk. Brad joined me on last year’s running trip, and we had an amazing time. It’s been fun to watch Brad and Mindy raise their son Miles. I dig his name.

I ran Grand Avenue in Keokuk that follows the perimeter of the town on the river. The avenue has so many great houses. This was my favorite. 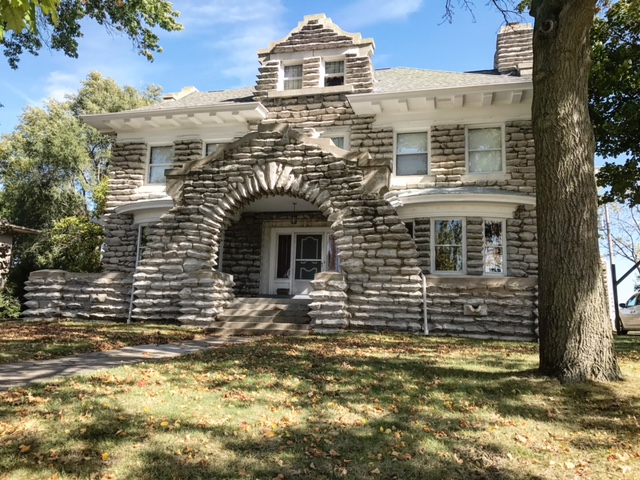 Our next stop was Quincy, Illinois. In 1825, then Bluffs, Illinois renamed their community Quincy and became the seat of government for Adams County, both named after newly elected President John Quincy Adams. Quincy hosted the sixth Senatorial debate by U.S. Senator Stephen Douglas and his challenger, Abraham Lincoln. With an estimated crowd of 12,000 in attendance, Quincy was the largest community at which Lincoln and Douglas debated. I thanked Debbie Smith again at the mural that highlights this debate. I’m also thankful for Leslie Blase of the Bridge the Gap to Health 5K, 10K and Half Marathon in Quincy for sending over this great shirt to wear. Thanks Leslie!

In Quincy, I also stumbled upon this amazing building that barely looks real. A common denominator to all old river towns is amazing architecture. It’s been a treat to find some of these buildings along the way. 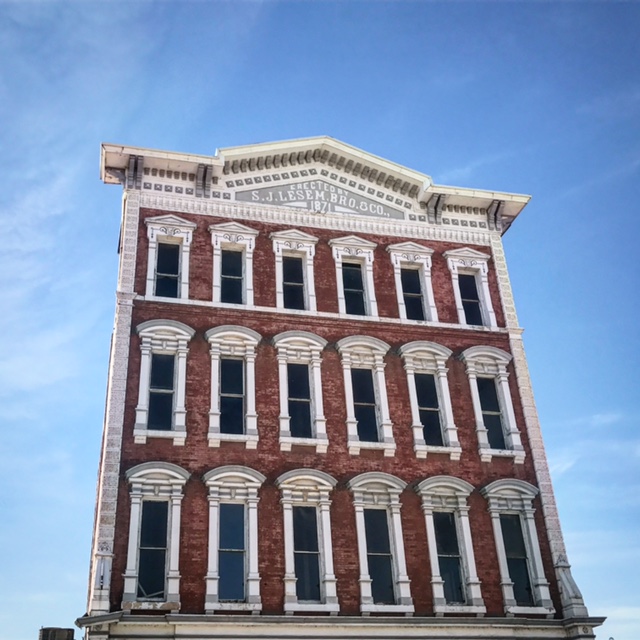 From Quincy, we landed in Hannibal, Missouri. There is one person who is king in Hannibal, and that person is Mark Twain. Hannibal is where Mark Twain lived from age 4 to 17. The town is a popular tourist destination and has Mark Twain tributes throughout town. At the Hotel Mark Twain, I thanked Mike Hyatt once again for his donation.

Down the road is the Mark Twain Brewing Company where I thanked Andy Max once again. I also want to thank Angie Wilcoxson, race director for the  Hannibal Cannibal race for the great shirt. I love this shirt, and I had to prove my worth by climbing the many stairs up to the city’s Mark Twain lighthouse. 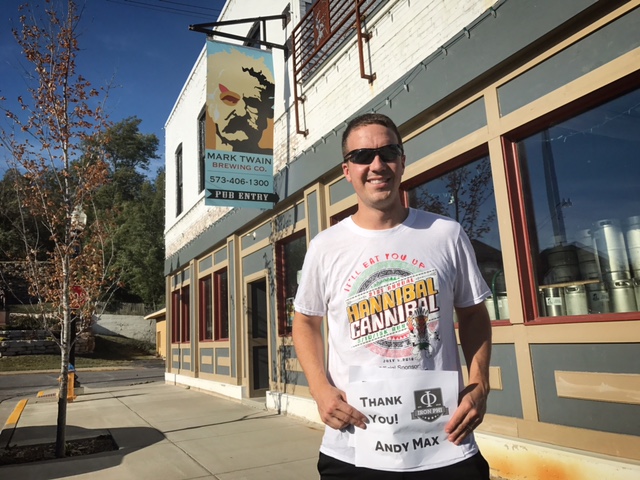 I thanked Andrew McGuire at the base of the stairs and in front of the Tom Sawyer and Huckleberry Finn monument. Andrew is a young Phi Delt volunteer who does a great job for us. We cross paths at national events, and I always enjoy my time with him. Thanks Andrew! 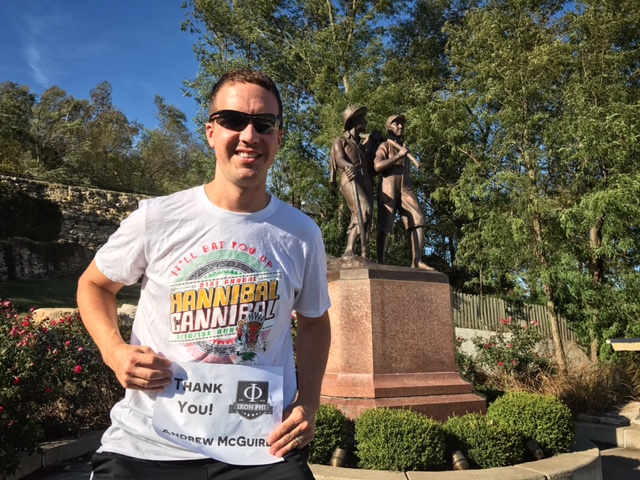 We then drove two hours to St. Louis, Missouri. We were pressing the daylight hours, but we finally made it to the city with a few minutes to spare. The St. Louis Arch remains one of the most impressive landmarks in this great country. I thanked Keith & Sue Berg at the Arch. I get to see the two of them at Iowa State football tailgates, and they are always generous supporters of my runs!

The sunset at the Arch was spectacular, and it provided the best backdrop to a long day. Stunning! 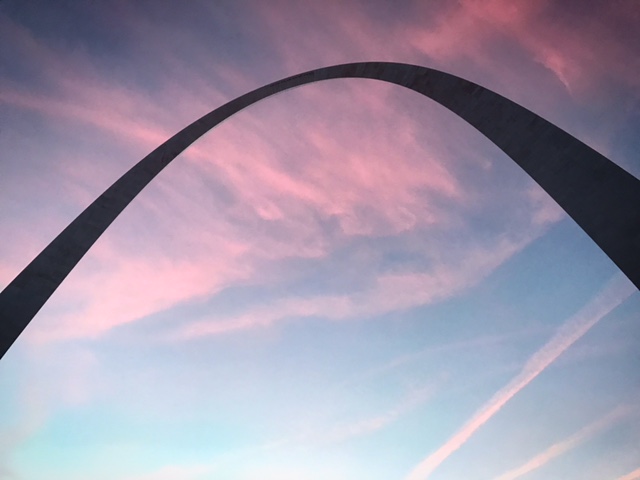 Our home for the night was an incredible Airbnb space in Dogtown. I connected with Kara as I was planning the trip. Her reviews were really, really good, and how about this for a small world? Her fiancé is a Mississippi State Phi Delt. So cool, and I love making these connections during these trips. 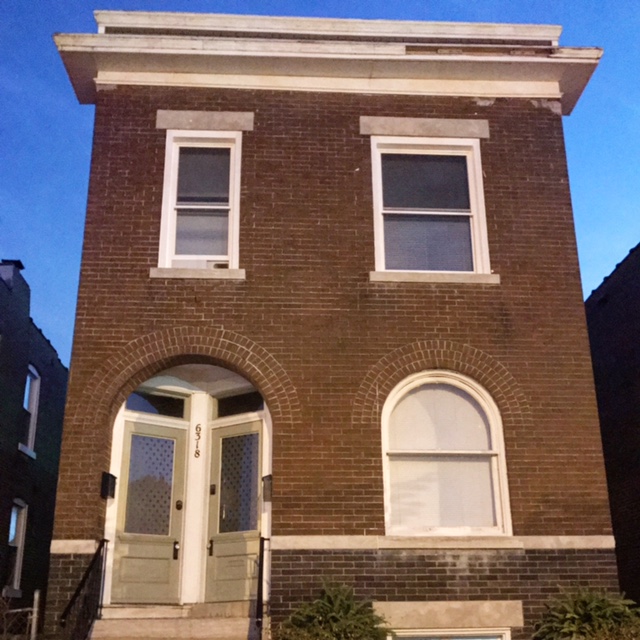 Kara is an Airbnb pro. The apartment is flawless and filled with nice touch after nice touch. 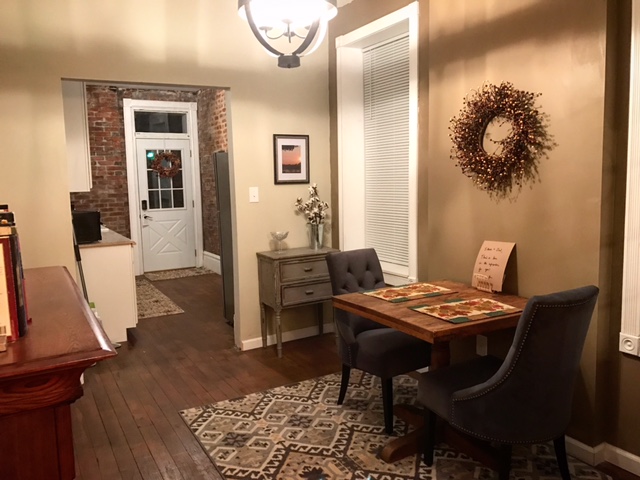 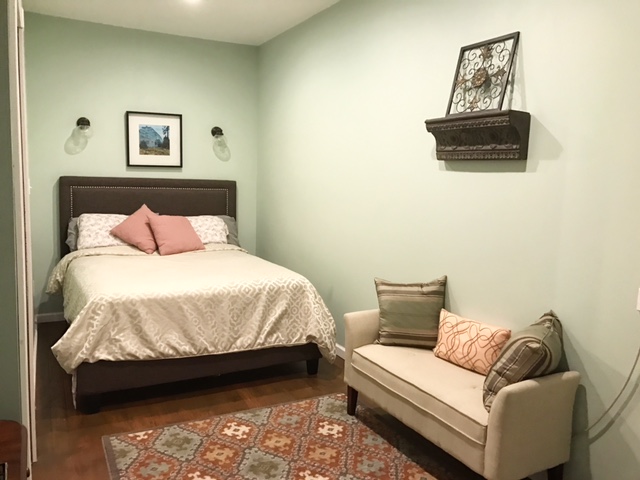 And our stay came with probably the best note you can get from an Airbnb host. 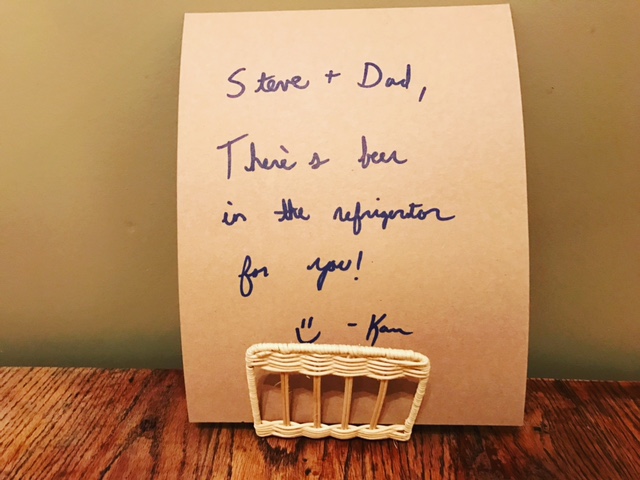 Day four came to an end with dinner across the street from where we were staying. On Tuesday, we planned to drive all the way from St. Louis to Oxford, Mississippi.