My final day of running had arrived. In front of us was a drive from Vicksburg, Mississippi to New Orleans, Louisiana where dad and I would take Friday to relax and be tourists before flying home to Des Moines on Saturday morning. Day 7 is always bittersweet. On one hand, I greatly look forward to a few days of recovery and flying home to the family, but on the other hand, I begin to think back about the journey that was. Each trip has been very special, and like any good vacation or accomplishment, many times you don’t want it to end. This year’s trip had been particularly special having my dad alongside me. 2,700+ miles in the car over 9 days, the same mileage if you were to drive from New York to Los Angeles. We were weary road warriors.

Before we left Vicksburg, Mississippi, we went back to the Vicksburg Military Park for a short car tour. The park was closed to cars when we had arrived the evening before, so we were excited to see more of the park. While we did not take advantage of the 16-mile driving tour, we did see many breathtaking views and monuments. I thanked Jayson & Amanda Buechler again in front of this amazing Iowa monument.

On the way to Natchez, Mississippi, we swung through Port Gibson, Mississippi to have a look. In a famous Civil War legend, General Grant reportedly stated that Port Gibson was “too beautiful to burn.” He left Port Gibson mostly unscathed on his northward trek to Vicksburg. We found another wonderfully designed courthouse for a picture. I thanked my colleague Jim Rosencrans for his donation. I’m really proud of the work that Jimmy is doing in his role at Phi Delt, and it’s been fun to watch him grown in his short time on staff. I get to see him in a few weeks in his native Pittsburgh, PA.

Natchez, Mississippi was the next stop. Natchez and Vicksburg get much attention from river tourists, and both deserve it. Natchez turned 300 this year, and it is known as the birthplace of Mississippi and the biscuit capitol of the world! It is a great Southern town with a rich culture and heritage shaped by people of African, French, British and Spanish descent. Natchez had more millionaires per capita before the Civil War than any other city in the United States. Mike Scarlatelli knew what he was doing when he picked up both Vicksburg and Natchez with his donation. I also want to thank Craig Polk from The Natchez Half for sending along this wonderfully designed shirt to wear during day seven!

Our next stop was St. Francisville, Louisiana, just north of Baton Rouge. Called “the town two miles long and two yards wide” because it was developed atop a narrow ridge overlooking the Mississippi River, St. Francisville was the commercial and cultural center of the surrounding plantation country. I thanked Mike Hyatt again for his donation at a very scenic church in town that is located beneath some of the more amazing trees we saw during the trip. 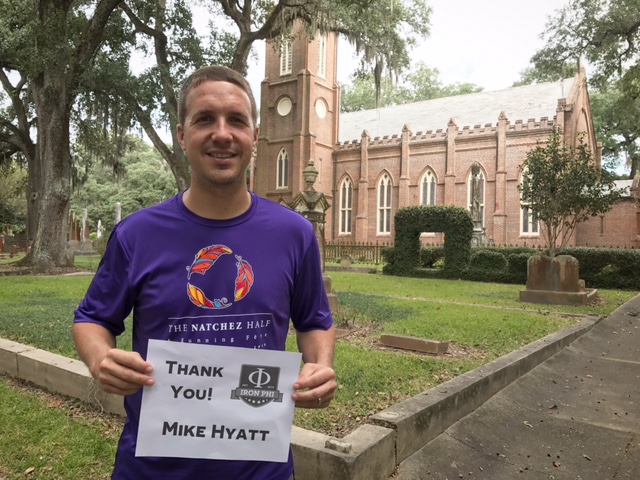 Our next stop was Baton Rouge, Louisiana, the capitol of Louisiana. I always forget how big Baton Rouge is, and the traffic always seems hectic. This year has been a tough one for Baton Rouge. Flooding and intensely covered shootings between cops and residents have contributed to the negative attention of the city. This was my second time in Baton Rouge. It’s a great city, and I know it will bounce back. I did my Baton Rouge run around one of Louisiana State University’s campus lakes. Not too shabby! 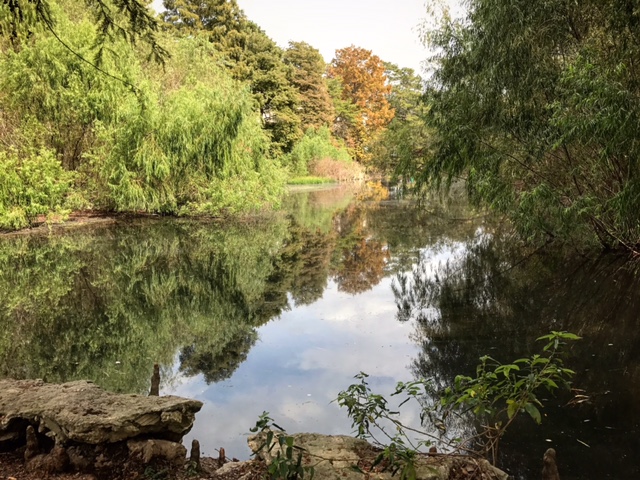 Louisiana State is a beautiful campus and its Memorial Tower adds to the beautiful quad on campus. Parking was very tight on campus, so we had to hurry during our thank you to Scott Lynch. Scott is one of Phi Delta Theta’s regional volunteers and is a University of Pittsburgh grad. I helped bring back our chapter at Pitt years back, so I have a special place in my heart for its great city campus. I love being around Scott. His laugh is infectious and his enthusiasm for everything he does is admirable. Thanks Scott!

I did not expect to run a mile in Donaldsonville, Louisiana on this trip, but all roads were leading to it after I took a wrong turn that set us back about 45 minutes. We made the most out of the blunder, and the town even had a nice historical district close the river, including another great courthouse. I thanked Mike Hyatt again, a common theme during the trip as Mike was very generous!

With time catching up to us, I made the executive decision to forego Thibodaux, Louisiana in order to spend more time in New Orleans. I was a bit bummed, because I had read about the proud Cajun heritage in Thibodaux. A few more hours in New Orleans is never a bad alternative though.

If you have never been to New Orleans, you MUST GO! I’ve been to the NOLA three times now: a year after Katrina, two years ago and this year. It just keeps getting better and better, and there is no other place in our country like it. The Garden District would be our home for the next two evenings. The French Quarter is great and all, but the Garden District is now my favorite place to stay. It is filled with amazing homes and unique neighborhoods, but it is still very walkable to the Central Business District and the French Quarter. I thanked Mike Hyatt again in front of a great Garden District house.

Another house showing their pride for the New Orleans Saints.

Dad and I ventured over the Jackson Square, the hub of tourism in the French Quarter and the site where in 1803 Louisiana was made United States territory pursuant to the Louisiana Purchase. Andrew Jackson on his horse with the St. Louis Cathedral in the background offers an amazing backdrop for the activity near the square. I thanked my colleague Renee Crist Lefter and her husband Kevin for their very generous donation. Kevin and Renee love New Orleans, and I know they’ve ridden their motorcycles to New Orleans from the Cincinnati area. Renee has been at Phi Delt ever since I began in 2004, and she is one of our organization’s rocks. She even became our first female Iron Phi a few years ago! Thanks Renee!

I also want to thank Lynsee Belsome of the Jazz Half Marathon & 5K for sending along this perfect shirt for New Orleans! I received a few comments during my time in the Big Easy. The Jazz Half benefits the cancer program at Children’s Health in town. Thanks Lynsee!

Another fun shot of the St. Louis Cathedral.

A new friend waiting to cart tourists around the French Quarter.

Artists line the perimeter of Jackson Square selling their assets.

A few blocks to the north of Jackson Square is the infamous Bourbon Street. A walk through Bourbon Street always offers a good time, and the people watching is some of the best in the country. I thanked two of my high school friends Brad & Lindsay Klein for their donation. I know that I’d have a blast with the two of them on this street! Brad and Lindsay live in Des Moines with their three adorable kids. Tillie and I love seeing them.

More architecture from the French Quarter. 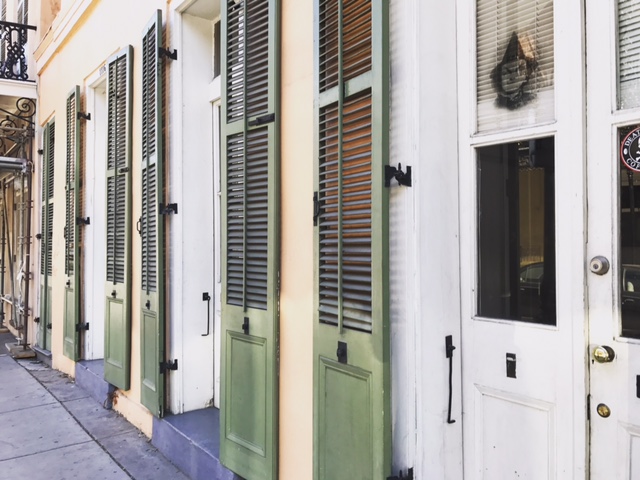 There is never a shortage of horse-drawn carriages carting tourists through the streets of the Quarter. 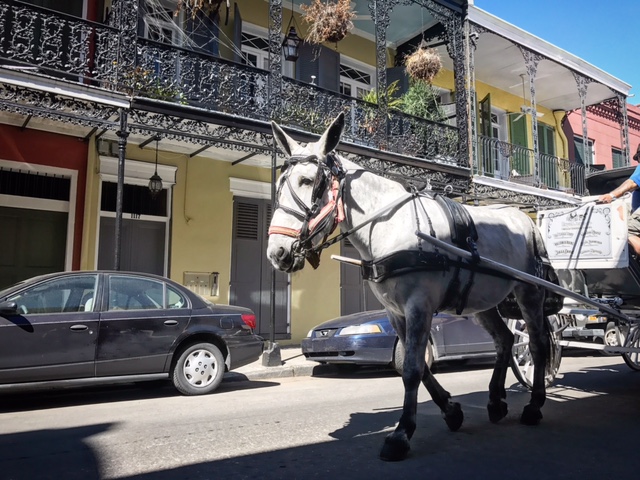 Lafitte’s Blacksmith Shop is a historic building at corner of Bourbon Street and St. Philip Street in the French Quarter. Constructed in the French/Spanish colony during the 18th century, it is one of the older surviving structures in New Orleans and has been called the oldest structure in the U.S. housing a bar. I had to stop and have a beer here.

Royal Street in the French Quarter is one of the oldest and most well-known streets in the city. My favorite corner of the Quarter is located on Royal, and I had to take a minute to thank my good friend Mario Villa. Mario and I lived together for two years just out of college, as we both began employment at Phi Delta Theta at the same point. We’ve developed a great relationship over the years, and I love visiting him when I am in Austin, Texas. 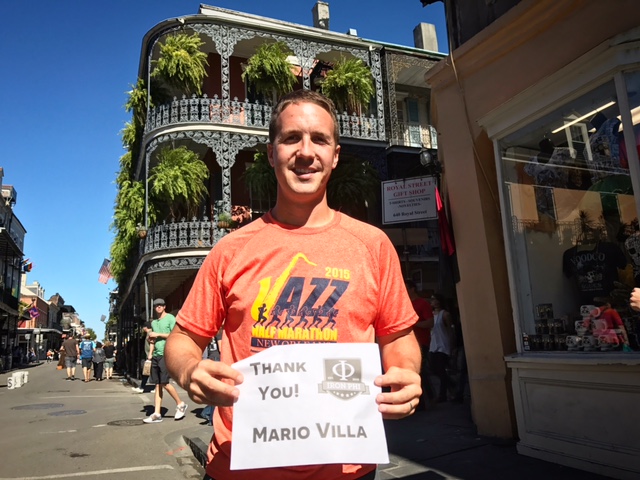 A close-up of the corner. Stunning! 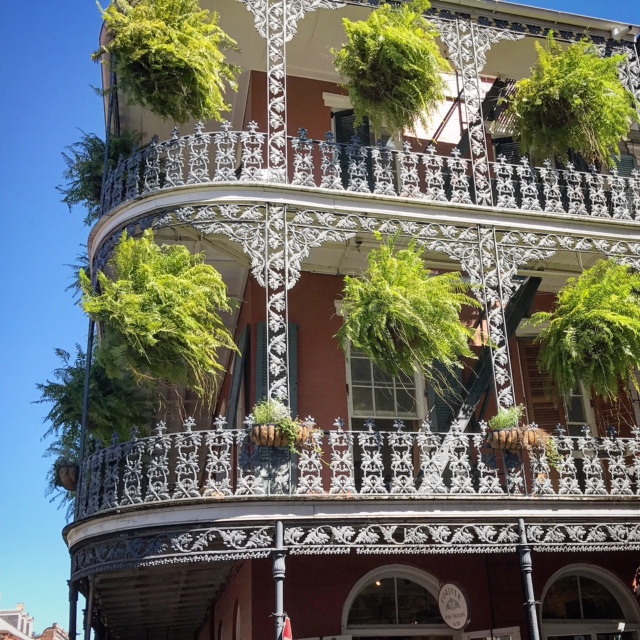 On the way to dinner that evening, I had to attempt to capture the ambiance of New Orleans during Halloween. Voodoo and the underworld are a big deal in this city, so you can probably imagine the fun its residents have during the Halloween season. This property was a great example of the fun that they have. Speaking of fun, I thanked two pretty fun people, Brad & Kelly Becker. Brad is a Fraternity brother of mine, and we like to a good laugh together. 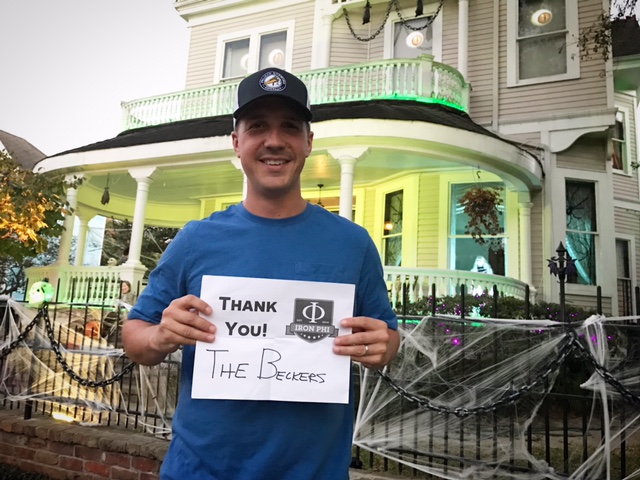 Dinner that evening was really good at the Red Dog Grill. I was particularly fond of the wooden dog head on the wall that looked just like my Lex. Red Dog celebrated Rhodesian Ridgeback art throughout the restaurant by the same artist. While Lex isn’t a Rhodesian, he looks a lot like one. Need this for the house! 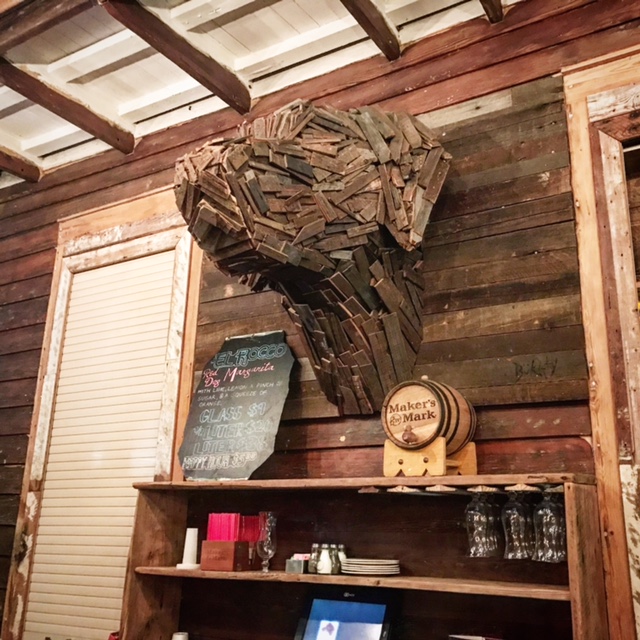 Our stay for two evenings was a historical New Orleans shotgun house in the Garden District. A shotgun house is a narrow rectangular residence, usually no more than about 12 feet wide, with rooms arranged one behind the other and doors at each end of the house. It was the most popular style of house in the Southern United States from the end of the American Civil War through the 1920s.

The theory goes, you could shoot a shotgun bullet through the front door and it’d fly through every room in the house on the way to exiting the back door. Maya was our Airbnb host, and it was a pleasure staying in her place. She lives right next door (to the left) and the area of town was absolutely perfect.

The 2016 trip had come to an end, and dad and I were both ready to go home. It was an amazing week that I will be recapping in a post to come.

There are a few other people I need to thank before going.

First and foremost, I must thank my wife Tillie. Without hesitation, she sends me on my way each year for these trips knowing that she’s going to have a hectic week in front of her with work and our kids/dogs. She knows that these trips are important to me, and I am thankful of her every day. Love you Tillie!

To my mother, who let me steal dad for 9 days, thanks! We had a blast, and taking this trip with dad means more than you will ever know.

I had a few donors along the way who donated after I had left home, but I was not able to thank. Time simply ran out, but I am grateful for their support. Thank you Matt Fritsch and Jeremy & Julie Witt!