Thursday would have a different feel to it compared to the rest of our days on the trip. Last year, driving down the Mississippi River in a week, I ran a mile in 50 different cities. Each day consisted of running, driving to the next city, running, driving to the next city, until we reached the final destination. It was a whole different animal, and I’ve enjoyed getting back to running more mileage each day in one city. Our time in Cape Cod would take on this old approach, as we wanted to see as much of the Cape as possible.

The closest I have ever been to Cape Cod was Plymouth, Massachusetts, so I was quite excited to experience this unique area of the United State. October is much quieter on the Cape, but we soon realized that traffic is always an issue on its limited roads. Our goal was to drive from Providence, RI to Provincetown, MA, stopping along the way in six different spots.

Our first stop of the day was Sandwich, Massachusetts. Sandwich was the site of an early Quaker settlement and today hosts the oldest continuous Quaker Meeting in the United States. Honestly, I was hoping for a large sign of a sandwich that would welcome us to town. We didn’t find one, but I couldn’t complain about running our first mile on this…. 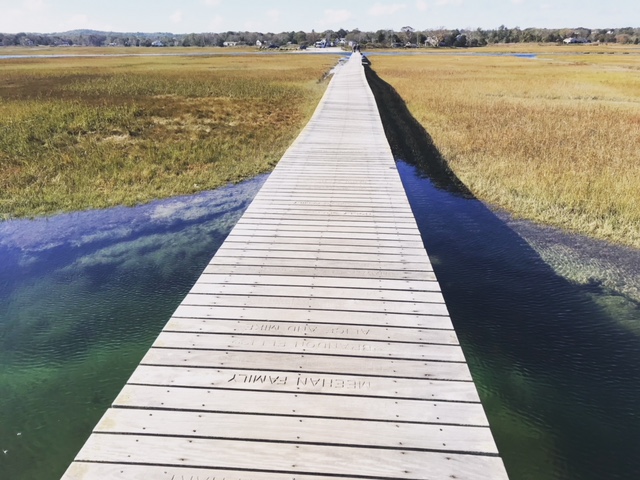 My first thank you of the day was for my parents again. They have been to Sandwich themselves, and they were excited to sponsor the stop. Our first mile was a bit windy, but it was a great way to start. 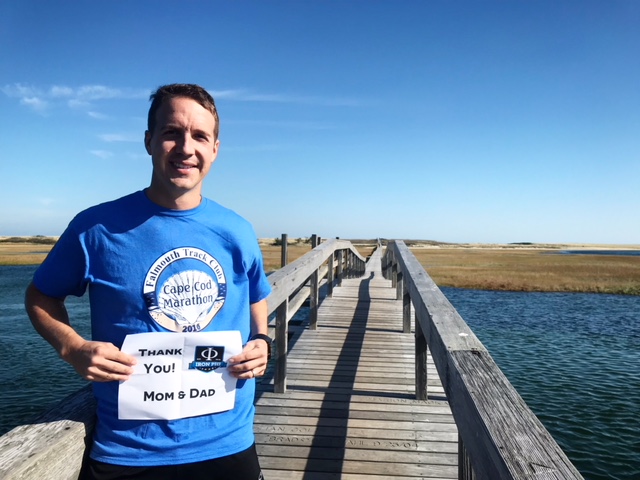 A shot of Ross checking out the Cape Cod Bay.

Our next stop was Falmouth, Massachusetts in the Southwest corner of Cape Cod, across from Martha’s Vineyard. My running shirt for the day was graciously donated by Helen Kennedy of the Cape Cod Marathon and Falmouth Track Club. The event occurs next weekend, and they are celebrating their 40th year! I was proud to support the club and its race during our time on the Cape. In Falmouth, we also enjoyed the scarecrow contest along Main Street. Ross named this one Marilyn Mon-scarecrow. I was pretty proud of him for his quick wit. 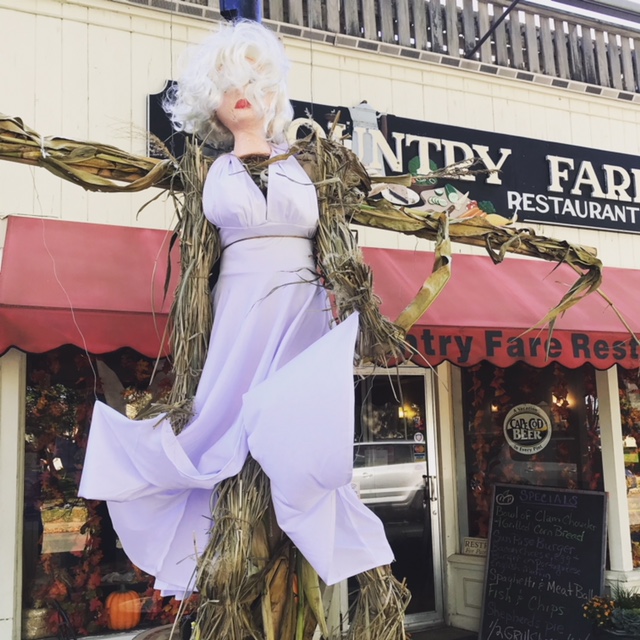 We ran along Main Street and peered into the fun stores along the way. The picture below is in front of an impressive local school, and I thanked Brendan and Stephanie Cunningham. Brendan and I go back to 2004 when we began our tenure on the Phi Delt staff. Brendan is a proud Northeasterner and has spent much time on Cape Cod.

Our next stop was Hyannis, Massachusetts. Many refer to Hyannis as the “Capital of the Cape,” as it is the commercial and transportation hub. We stopped to admire the boats. I decided to thank Rob & Julie Waltz at the stop when I sighted the boat named Lauren. Lauren is my sister-in-law and Julie’s daughter.

The Kennedy Compound is in Hyannis and consists of three houses on six acres of waterfront property. If you indulge yourself in Kennedy history, you’ll always see pictures and clips of the family at their compound in Hyannis. The John F. Kennedy Museum is located on Main Street, and this memorial was spotted near where we ran. I thanked Uncle Tom and Aunt Colleen again for their donation.

Our run in Hyannis also took us past a classic Cape Cod scene – a shingle-styled house on the beach. You can see these shingles (and Cape Cod style houses) throughout the Cape. Makes sense right. The Cape Cod style holds a special place in my heart, as Tillie and I lived in a Cape Cod in Cincinnati. I thanked Tom & Kae Roti again for their donation. Tom & Kae, you need to visit Cape Cod! 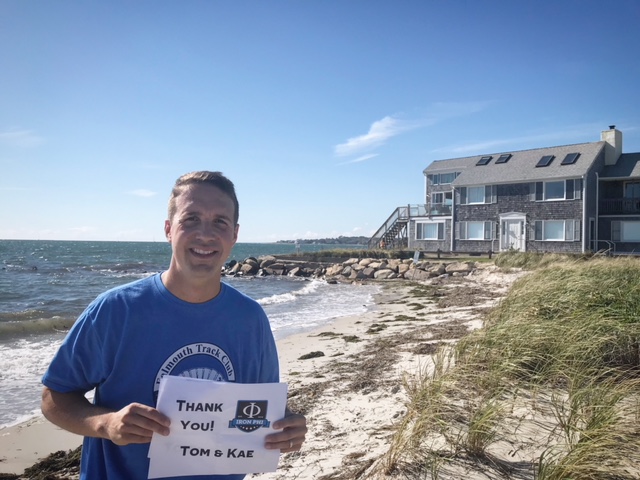 Our next stop was Chatham, Massachusetts. Chatham is known for its beaches and its desirable Main Street. It is home to the Chatham Lighthouse, which was established by President Thomas Jefferson in 1808 to protect the ships circling the Cape. At the lighthouse, I thanked Deb Smith again for her donation. 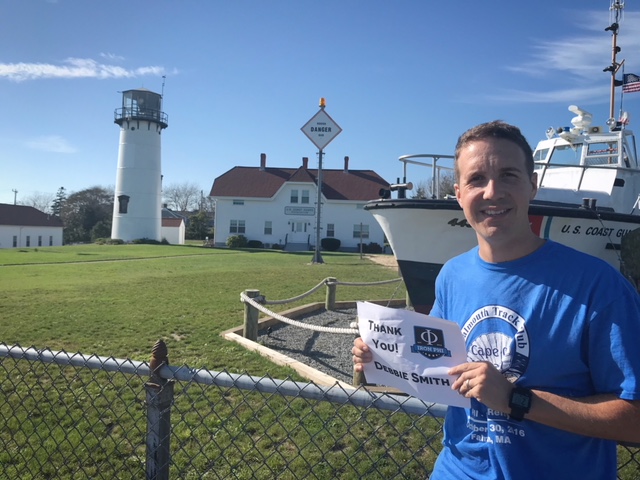 We ran our mile along the beach, an experience that always seems like a better idea than it actually is.

We stopped on Main Street to walk around a bit. Mid-October has become my sweet spot for the annual running trip. The weather is generally beautiful (amazing this week), it’s before daylight savings time, nights are filled with MLB playoff games, and I get to see the Halloween spirit throughout the country. I enjoyed this beautiful house’s pirate and pumpkin flag and thanked Joe & Victoria Kohout again for their donation. 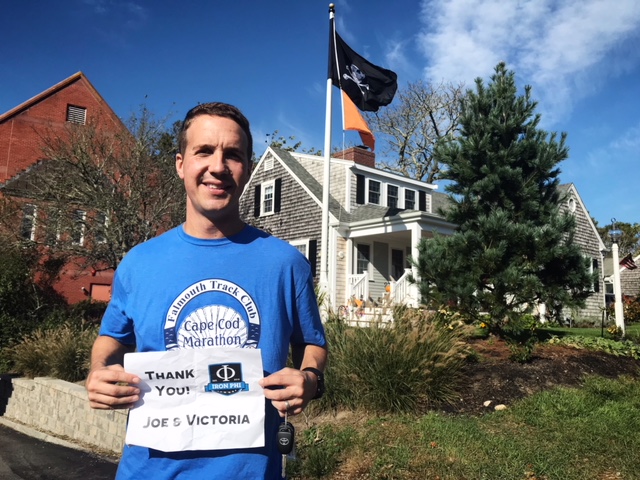 We grabbed a bite to eat at Chatham Cookware Cafe and split a few delicious sandwiches. <Probably should have had a Sandwich in Sandwich> Our stomachs were full for a 45 minute drive to the Cape Cod National Seashore.

The Cape Cod National Seashore was created by President John F. Kennedy in 1961 and includes nearly 40 miles of seashore along the Atlantic-facing eastern shore of Cape Cod. We had set ourselves up for another brutal run in the sand! I thanked Linda Carlson overlooking the National Seashore. Linda is my pal Brad Carlson’s mother, and a special person to both Ross and me. There have been countless moments during this trip where we could have used a bag of mix goop trail mix in our running bag. 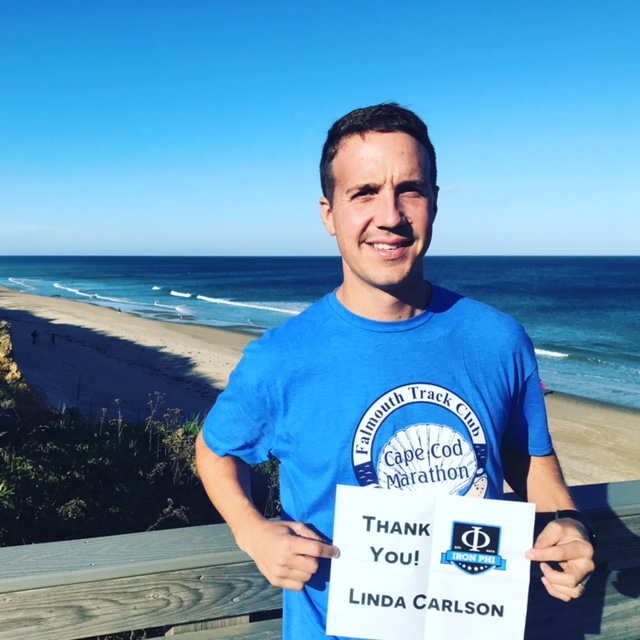 It’s really tough to complain about running on the beach when you have this view…..

but Ross’ pose captured our energy wonderfully. No sandwiches were lost.

From the National Seashore, we drove north to Wellfleet, Massachusetts and Wellfleet Bay. Here’s a travel trip for you – If your Apple or Google Map wants to take you to your final destination, but they show it as in the middle of a body of water, don’t trust it. Ross and I failed to do so, and we ended up on a random island. It was beautiful, but quite rugged for our Toyota Camry. We turned around and found the actual destination. Wellfleet is located halfway between the “tip” and “elbow” of Cape Cod. I thanked Ricardo Vigil again for his gift. Yesterday, I didn’t know who Ricardo was. Today, I do! He’s a good friend of a mutual friend of both Ross and me – Brent Rauch. Mystery solved!

Our final stop of the day was Provincetown, Massachusetts. If you look at Provincetown on the map, it will intrigue you as a place you must visit! It is on the tip of Cape Cod and just across the bay from Boston. Fun fact – Provincetown has a year-round population of just under 3,000 and a summer population of as high as 60,000. Crazy. Many of the businesses close down for the winter, so we definitely missed the rush.

Our first stop was the Pilgrim Monument that commemorates the first landfall of the Pilgrims in 1620 and the signing of the Mayflower Compact in Provincetown Harbor. The monument towers above P-Town. I thanked my sister-in-law Jadee and her husband Jason. I always mention this on the blog, but I remain very proud of their military service. Jason is in Washington D.C. at the moment, and Jadee is in Tampa with their two girls. I’m amazed by their commitment to what they do, and Jadee was in charge of one of the first-responder units in Tampa during Hurricane Irma. You should read about her in this awesome write-up.

I was lucky enough to connect with the folks at The Tucker Inn, one of Provincetown’s beautiful Inns. It was a classic P-Town lodging option for us and provided great comfort for our trip. In front of the Tucker Inn, I thanked Shane & Jenna Omann. Jenna is another one of my unofficial little sisters who married her high school sweetheart Shane. They are expecting their second child which is awesome! Shane played a big part in this year’s U.S. Open golf tournament at the Quail Hollow Club in Charlotte. He’s on the grounds crew and worked his tail off for this awesome tournament.

The Tucker Inn has a few amazing communal spaces that guests can take advantage of, including this outdoor version where breakfast is served…

and this indoor space. Really nice! 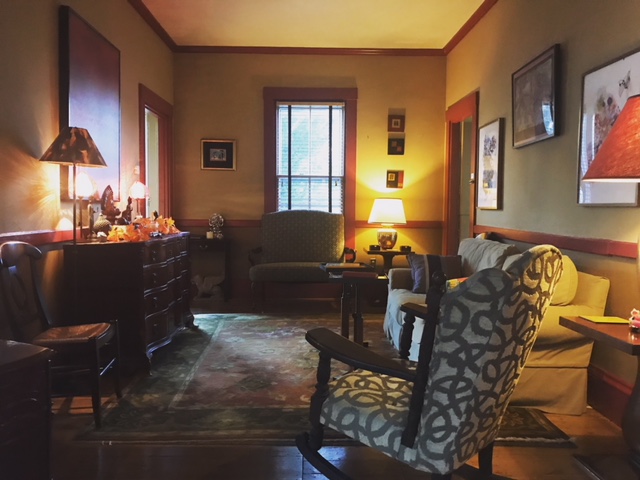 A look at one of the rooms. A fire on a chilly October evening is at my back as I type this post.

Ross and I cleaned up and headed to Commercial Street for dinner. I had to capture a Runner’s Choice in front of the Lobster Pot on the way. It was getting dark, so the lighting isn’t the best, but still great! Thanks again to Joe & Sarah Wechsler for their donation. 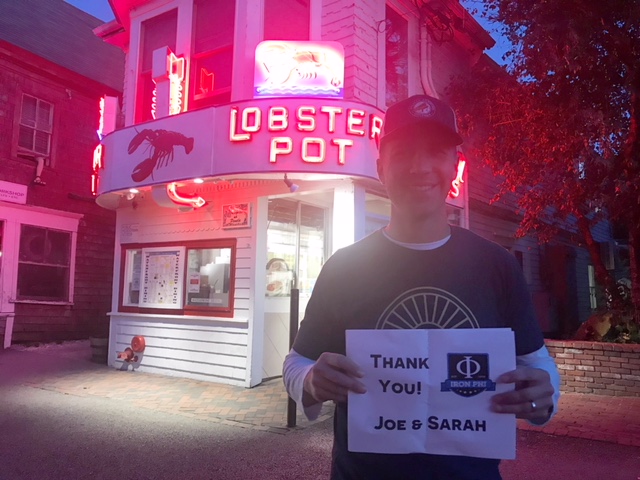 We walked out to one of the piers to get a vantage point of the city. We stumbled across this fun bench where I thanked Adam & Lindsey Good again. 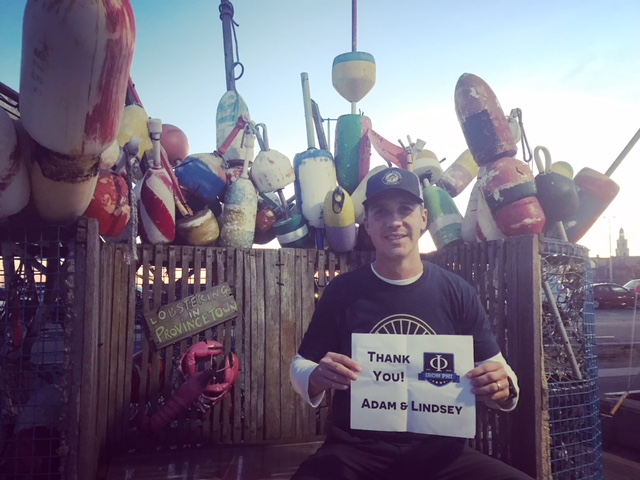 When in Cape Cod, you must get a Lobster Roll, and we found an amazing one at The Canteen. So very good. On to Boston in the morning!