Wednesday began with a 5am wake up call to get to our bus to Providence. A quick subway over to Times Square in Manhattan led us to the bus station where we jumped on a Peter Pan bus. By now, you know that I am a bit addicted to ridiculous cheap travel experiences (reference every Megabus mention on my blog), and Peter Pan was my newest deal. When researching how we were going to get from New York to Providence, I stumbled upon Peter Pan and purchased two tickets for a grand total of $9 to Providence. Free wifi and plug-ins on board, room to spread out, and a smooth ride, I was immediately in one of my favorite writing spaces. 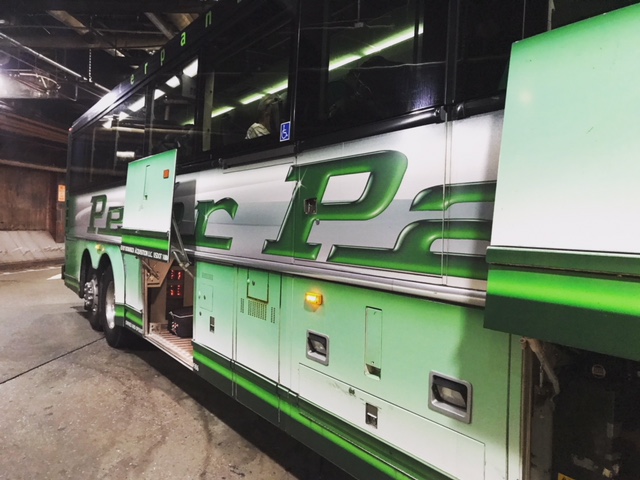 We arrived in Providence around 10:30am and walked a few blocks to our hotel for the night – The Dean Hotel. The Dean is both retro and hip and is a really fun lodging experience. It also provided us amazing convenience, located downtown and two blocks from where we will pick up our rental car on Thursday morning. 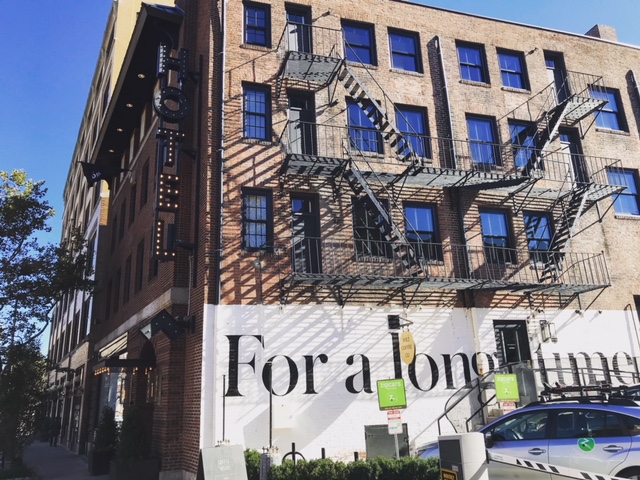 Within The Dean is a restaurant, karaoke bar, cocktail den and coffee shop. It is truly a one stop shop and filled with friendly employees and fine design.

The rooms are simple and elegant with great branding sprinkled throughout. 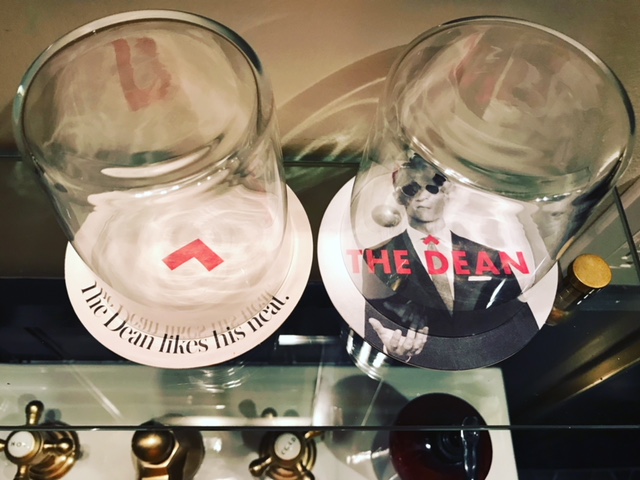 I’ve always been a fan of Providence College’s mascot – The Friar. We had reached Friartown, and the campus was beautiful and very peaceful. Both Ross and I agreed that Providence was a nice break from 4 days in Philadelphia and NYC. Energy is key to my running trips, and there is something magical about the mid-sized cities. Add 73 degrees and sunny to that mix, and you instantly have a great day.

Our next stop was the Rhode Island State House. Providence is the capitol of Rhode Island, and its state house is one of the more impressive ones I’ve come across in my days. I brought in the lefty for this thank you sign, allowing Ross to hold the sign for his parents Tom & Kae. Tom & Kae are two of the sweetest people I know and raised three great Roti sons. Tom remains one of my top 5 Instagram users and Kae reminds me a lot of my own mother. Great people!

An obvious next landmark was the old statehouse, just steps away from the newer and shinier version. I thanked David and April Etler once again for their donation. The Old State House was our venture up College Hill to Brown University. Providence’s hills provided for some uncomfortable moments today.

We headed towards Thayer Street near Brown for a bite to eat, and we found incredible falafel and wraps at East Side Pockets. We walked off lunch a bit and strolled down Thayer towards the University. Along the way, I found another Good restaurant.

Visits to Ivy League institutions are always fun and give you a few moments to reflect on your own mediocre SAT/ACT scores. Brown is beautiful and this sunny day had the campus bustling with activity and students hanging out on the greens. It is home to just under 10,000 students. The school’s endowment is $350,000/student. You do the math. One of the best things about these running trips are donations from people you do not know. Ricardo Vigil is one of those people, and I am appreciative of his generosity!

From Brown, we headed toward Benefit Street, an amazing road filled with stately old houses and landmarks. Providence is one of the oldest cities in the country, and much of its architecture reflects this. Along Benefit Street, I thanked Jeff and Julie Larson for their donation. When I think of the Larsons, I think of their old house in Fort Dodge and one of their daughter’s love for renovating old houses. This landmark was perfect for Jeff and Julie!

Also on Benefit Street is the Providence Athenæum, the fourth oldest library in the country. I had to thank a Phi Delt at this stop based on our organization’s tie-in with Pallas Athena. The building in the background of this picture is actually not the Athenæum, but I had to capture the sign. 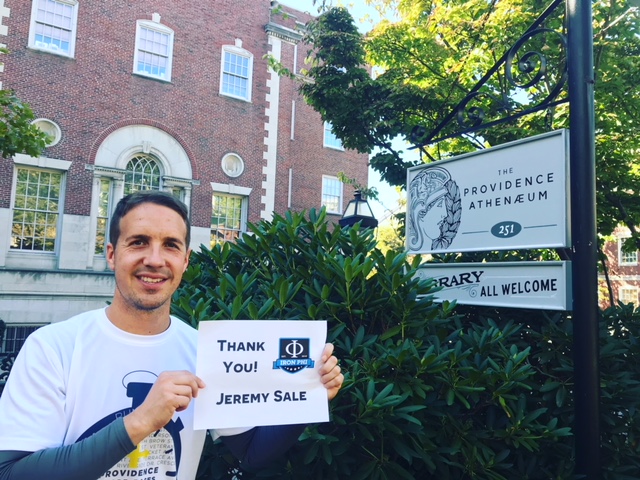 Our next stop was the First Baptist Church in America. I told you this city is old. Here, I thanked Jamison Arends, a fellow Cyclone and a guy who I truly enjoyed working with as a student. When you work with college students, there is no better joy to see them go on and see success, and it’s been fun to watch Jamison do just that. 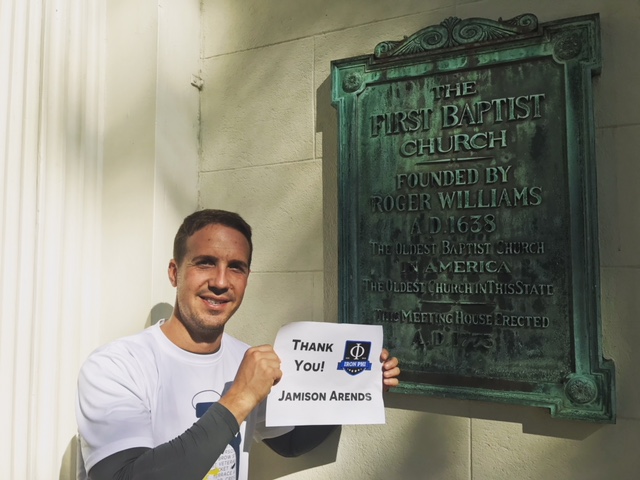 A view of the church from a distance…

The Providence River cuts through town and is a great gathering spot for residents. WaterFire Providence lights up the river periodically throughout the year and brings people into the city to marvel at its beauty. The river and its bridges produces a wonderful cityscape. 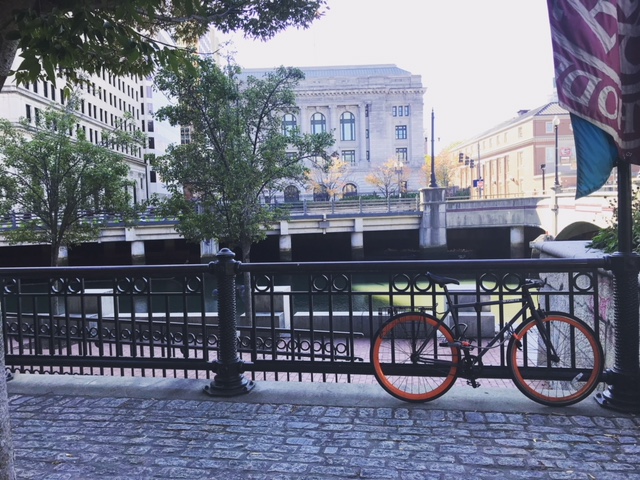 Another view of Providence from one of its pedestrian bridges.

One of the more random landmarks on this trip will be the Gun Totem, a totem poll with old guns embedded into it. Why not right? I thanked my Fraternity brother Pete Thompson for his donation. I ran into Pete at the Iowa State Cyclones Spring football game, and it was great to catch up. 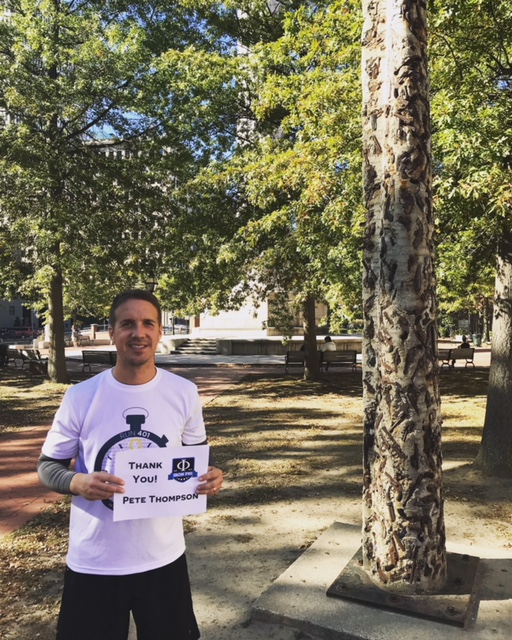 Rhode Island School of Design (RISD) is was one of the first art and design schools in the United States. It remains a well-renowned school throughout the country. Schools like RISD are so different from my collegiate experience, but I love walking through these types of campuses to watch the students interact with each other and their work. It’s impressive and admirable. I thanked my colleague Jim Rosencrans for his donation. Jim is on my team at Phi Delt and does incredible work. We have a mutual love for data, so it’s fun to get into that world with him.

We walked over a bridge to Downtown, and I found a structure that left me in awe within Providence’s financial district. They don’t make buildings like this anymore, and the cover photo on this blog post gives a close up of the amazing addition to this building. I thanked Adam & Lindsey Good for their donation again. 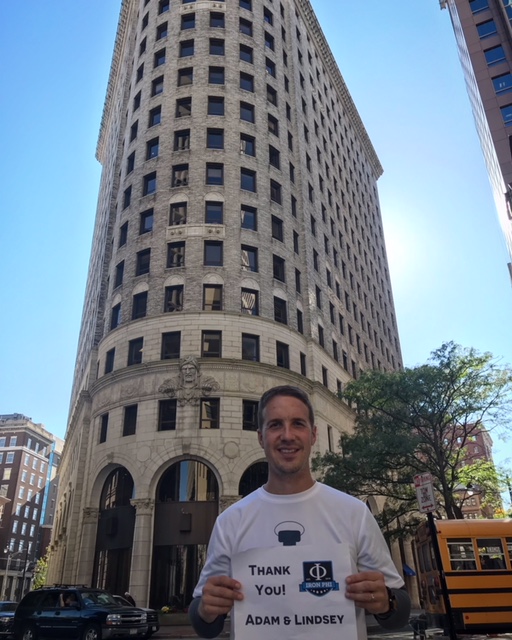 A few blocks away is Providence City Hall, another old and great structure on the National Register of Historical Places. I thanked Debbie Smith again for her donation.

I then turned around to capture the famous Superman Building.  111 Westminster Street is commonly referred to as the “Superman Building”, due to its resemblance of the Daily Planet building in the Superman comic book. It is the tallest building in  Providence, and the tallest in the state of Rhode Island. Quite impressive. I thanked Joe & Victoria Kohout for their donation again.

As we headed to Federal Hill, our destination for the day, we passed the Dunkin’ Donuts Center. If you know me well, you know that Dunkin’ Donuts is a brand that makes me very happy. I love everything about it, and the brand is obviously very popular in the Northeast. The DD Center is an athletic arena in town. I thanked my buddy Andrew Christy for his donation. Andrew and I both love donuts, and we like to share our hotspots across the country. He is a Phi Delt from Northwestern, and I’ve had the pleasure of working alongside Andrew in the fight against ALS.

As mentioned, our final stop was Federal Hill, an Italian district just west of downtown, filled with Italian eateries, bars, and shops. If you’re in Providence and have a hankering for Italian food, trust me, you’re in luck. I thanked Kelly Caughlan for her donation. Kelly has been very generous to me over the years during this trip, and I always appreciate her supportive words and encouragement.

I got a 45 minute nap in today!!!!!! Seriously, this trip has been taxing for both Ross and I, but we are on the cool-down section of the itinerary. Our final stop for the evening was The Malted Barley, home of delicious craft beer and gourmet pretzels. They had us at their sign. My favorite restaurants generally do one or two things extremely well. For The Malted Barley, they know they do pretzels and beer well, and they proved their case to us! The restaurant has two locations in Rhode Island (Westerly and Providence), and I want to thank owner Ron (a proud Wisconsinite) and general manager Colby for their hospitality. We enjoyed our conversation with Colby over dinner, the delicious pretzels and pretzel sandwiches (roast beef and bratwurst), and I knew Ross was truly enjoying himself when he started sending pictures of the pretzels to make his wife Megan jealous.

On the way back to The Dean, I found a fun mural.

How great is the lighting at The Dean! Off to Cape Cod. 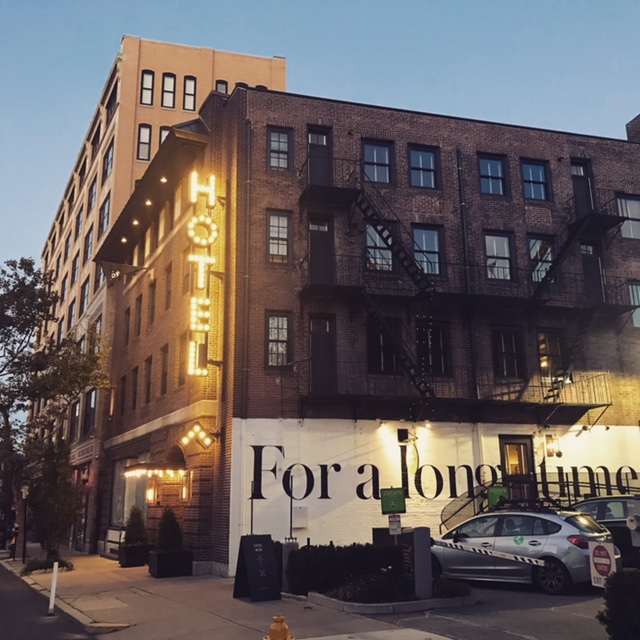