The final day of the 2014 running trip was here, and I was extremely excited to end the trip in Baton Rouge, Louisiana. As a sports nut, attending a night game at LSU has been near the top of my football bucket list for a number of years. It just so happened that my visit landed on LSU’s homecoming, playing the #3 Ole Miss Rebels at night, with the ESPN College GameDay crew in town.

David, Ben and I woke up early in New Orleans (a feat of itself), and drove to Baton Rouge for the day. Upon arriving, we drove directly on campus to drop off our stuff in Ben’s car as we were going to be running from downtown Baton Rouge to campus, changing, and diving right in to the infamous LSU tailgating experience. We drove past many of the fraternities and sororities and were welcomed with amazing Homecoming-inspired lawn decor. Many of the pieces were serious pieces of art, and the colors were amazing. This particular lawn caught my eye.

We then drove David’s car into downtown Baton Rouge where we would start our run. The start point for the day was the Louisiana State Capitol building, the tallest capitol in America. While impressive, I heard a few grumbling from Louisianans throughout the day about how the old capitol building is the fan favorite in town. We passed it later during the run, and it was easy to see why they have those thoughts. I thanked Ross Roti for the final time during the trip.

The Hilton Baton Rouge Capitol Center is a historic hotel in Baton Rouge, Louisiana, originally built in 1927 as the Heidelberg Hotel. It was listed on the National Register of Historic Places in 1982. It’s a massive building now owned by Hilton if you couldn’t guess from its name. Here, I thanked my Fort Dodge friend Kara Campbell. Kara and I go way back to the days of daycare and elementary school! She’s also a fellow Cyclone fan! 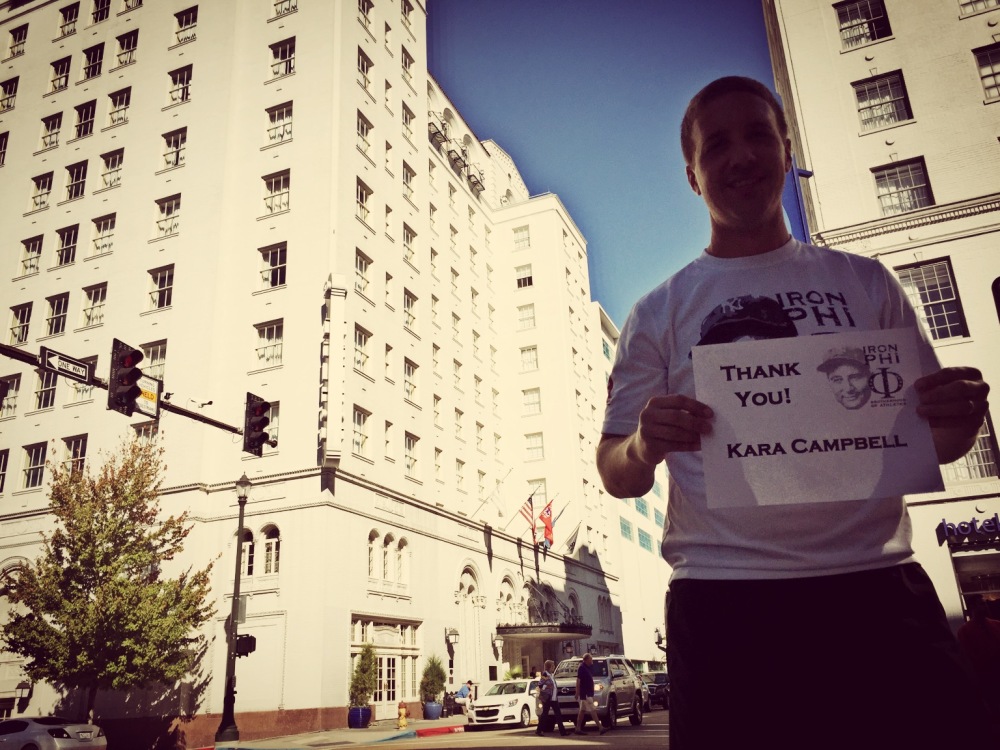 The next stop was Louisiana’s Old State Capitol. This may be one of my favorite pictures from the trip, thanking my wonderful mother and father once again. The structure is definitely more impressive than the new capitol.

Just down the road from the Old Capitol Building was the Old Governor’s Mansion. I quickly learned that everything in Baton Rouge that is prefaced with the word “old” is quite impressive. Here, I thanked my colleague Andrew Carlson. Drew’s donation covered all stops in Baton Rouge, but he was gracious enough to let me put other names on landmarks with my influx of donors. I was scheming up something special for him throughout the day, and the perfect opportunity presented itself that night. 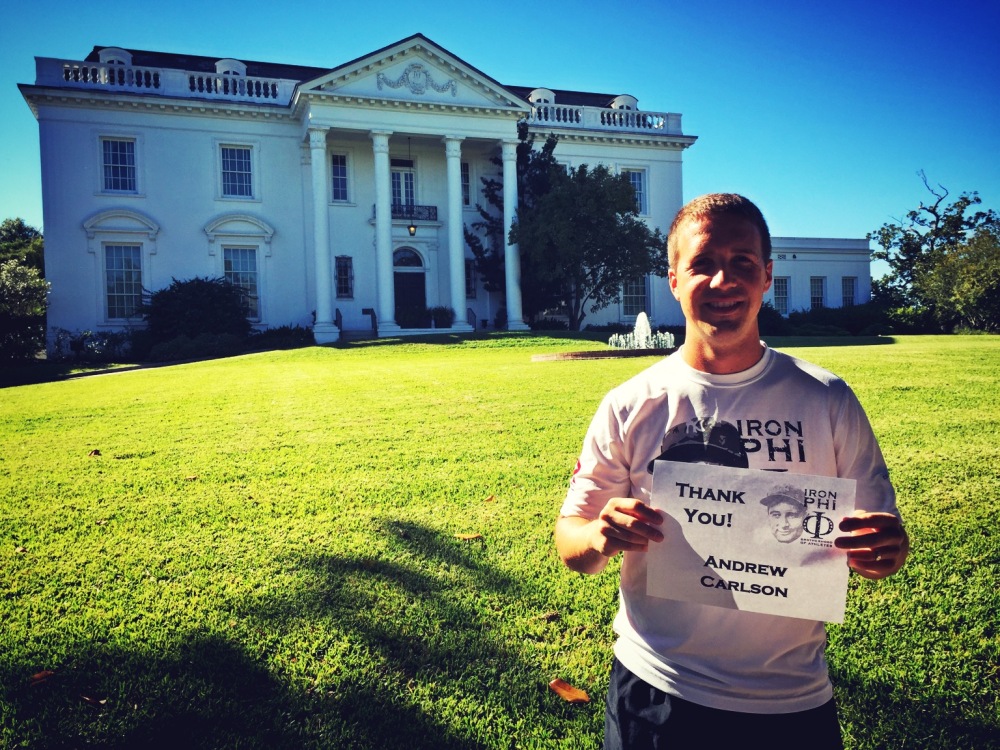 We then ran to the Mighty Mississippi River, where we found the USS Kidd. USS Kidd (DD-661), a Fletcher-class destroyer, was the first ship of the United States Navy to be named after Rear Admiral Isaac C. Kidd, who died on the bridge of his flagship USS Arizona during the attack on Pearl Harbor. Admiral Kidd was the first US flag officer to die during World War II, and the first American admiral ever to be killed in action. Here, I thanked Janice Bowers or Aunt Jan to me. Jan is another one of Paula Griffith’s sisters who I know from growing up. Paula & Roger, their three kids, and her two sisters all donated to my run this year. Quite awesome!

The longest portion of the day’s run took us from downtown to campus, where we were immediately welcomed by the vast tailgating scene at LSU. I’ve never seen anything like it. We Cyclones take great pride in our tailgating scene, but the LSU tailgate was on another level. Purple and gold were everywhere, and I’ve never seen so many RVs in my life. It was awesome to run around campus to check out the many different tailgating scenes. I particularly enjoyed this great trailer, featuring the ferocious Mike the Tiger. Here, I thanked Bronk & Jessica Harms for the final time.

Just down the road was Tiger Stadium, aka Death Valley, home to the LSU football team. The collection of football stadiums in the SEC is amazing, and the size of these stadiums always leaves me in awe. Seeing the stadium had me pumped for the game later that evening. I found a quiet spot to thank proud Ole Miss Rebel Sparky Reardon with a custom Hoddy Toddy sign. The Ole Miss crowd was in Baton Rouge in mass and in style.

Just outside the stadium lives Mike The Tiger, LSU’s live mascot and probably the most pampered tiger in the world. Construction on the current tiger enclosure began in November 2004 and was completed in August 2005. The habitat incorporates natural substrates, including grass, and also includes elements of LSU’s renaissance architecture and facts educating Mike’s visitors on the six living subspecies of tigers. The new enclosure encompasses 13,000 square feet. Mike’s home is nearly nine times the size of mine! We actually didn’t get to see Mike, but I grabbed a picture in front of his statue. We also chatted with a few LSU fans who for some reason told us about the great quality of the town’s water. They referenced being the #2 water in the nation. I think that they were surprised that I knew the #1 city – Ames, Iowa! I told them to Google it and watch our amazing promo video for a few laughs. Here, I thanked fellow Iowa State Phi Delt Jay Longnecker. Jay and I both advise the Phi Delt chapter at ISU and have become great friends. A passionate Cyclone fan, Jay is a man who I can always count on. A passer-by said “Who’s Jay Longnecker?” My only response was “one great dude.”

Also in the area is the Pete Maravich Assembly Center, or as David said, the House that Shaq built. It’s a really cool-looking arena, and I got a kick out of the entryway that is named Pete Maravich Pass. Here, I thanked Bret Zimmerman one last time.

Our next stop rounded out the LSU stadium trifecta. Alex Box Stadium is home to the LSU baseball team, a team that regularly makes the College World Series. I took one final opportunity to thank the Fort Dodge Baseball Team.

We headed back to central campus amongst the tailgaters to find the LSU Memorial Tower, a memorial to Louisianans who lost their lives in World War I. Most campuses have “their building.” This is LSU’s. I thanked Drew Carlson once again.

This was the end of the day’s run and my last mile of the trip. David, Ben, and I grabbed a quick picture in front of a blown up Mike the Tiger. While the adrenaline was still going from being at LSU on gameday, I was really hurting, but knew that I had a long day in front of me. 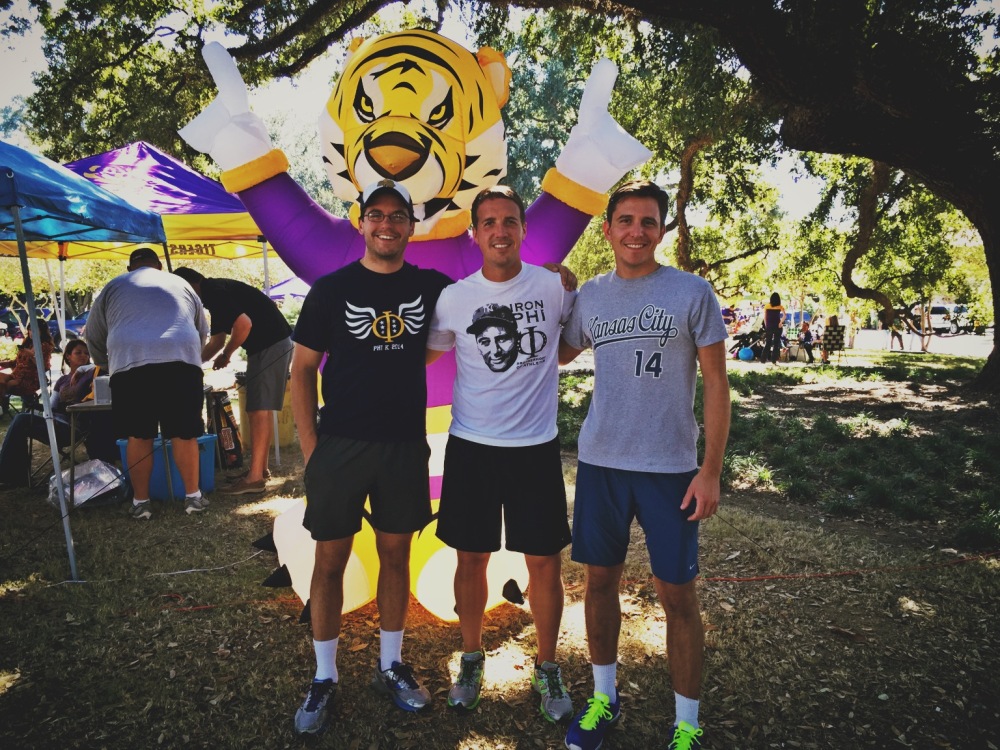 My friend Tyler Abadie, a LSU Phi Delt provided the three of us with amazing hospitality throughout the day. A week back, I reached out to Tyler asking about the best way to get tickets to the game. Because Ole Miss was #3 ranked, tickets were becoming tougher to get by the minute. Within a half hour, Tyler had found tickets and wouldn’t let us pay for them. He and his wife also welcomed us into their tailgate for some delicious food and drink. I definitely took away a few tips from Tyler’s tailgate, namely some amazing food ideas. It was fun to see Tyler and hear about his entrepreneurial ventures. He’s having great success, and it’s amazing to hear of this young Phi’s dreams shaping out to be reality. Tyler is doing it.

Also at his tailgate was my tailgater of the day, NOLA, the German Shepherd. I’ve never seen such a chill dog immersed in such an electric atmosphere. NOLA is definitely the general of the tailgate. 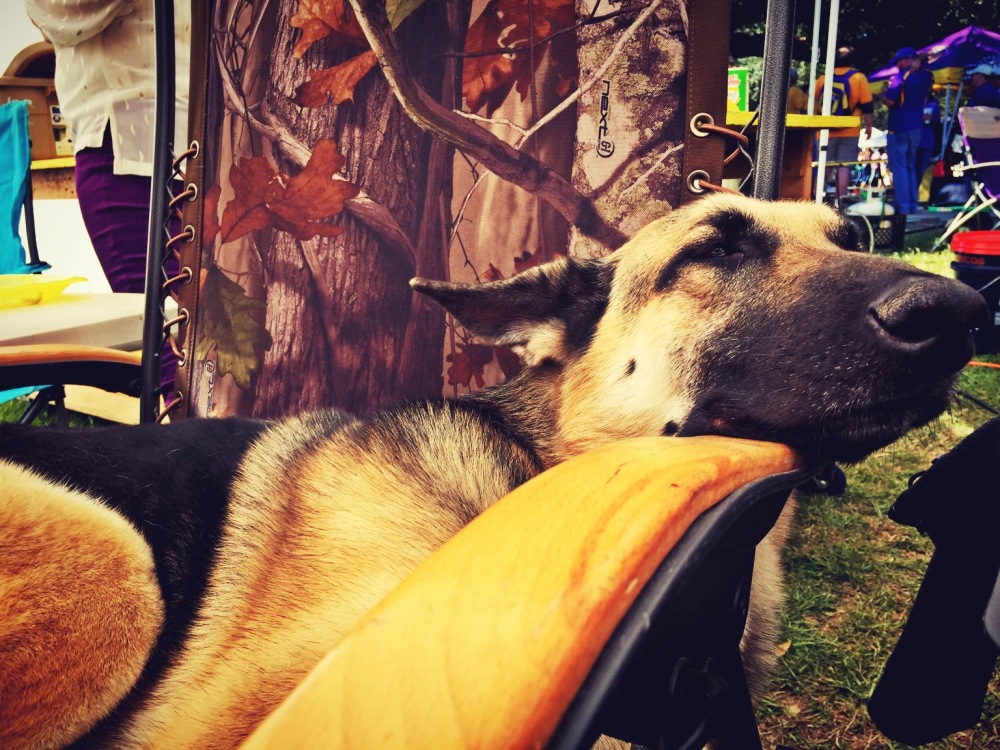 We headed to David’s aunt and uncle’s tailgate where we were once again welcomed with amazing hospitality. When you hear about hospitality in the South, it’s the truth. Very, very, generous people who only want visitors to have a great time in their environment. I even made a few new Cajun friends. The toughest part about being on the road now is missing my family. These two young lads provided us with great entertainment and totally made my miss my kids.

We headed into the game to find that our seats were going to provide us with a phenomenal experience. About 40 rows up on the 35 yard line, I stood in awe of the magnitude of Tiger Stadium. The band at LSU is well-known, and they did not disappoint.

Just before kickoff, I took the opportunity to thank Sean & Michelle Wagner. In every year except one while working at Phi Delta Theta, I’ve reported to Sean, and I could not ask for a better friend, manager, leader and mentor. Sean has a true passion for Phi Delta Theta, and I love working with him. He’s always working to make our great Fraternity better, and his leadership skills are fantastic. He’s great at what he does. Sean and Michelle are expecting their first child this December, and we can’t wait to see them as parents.

We were able to see the college football game of the week as LSU knocked off the #3 Rebels in a defensive battle. That stadium was crazy loud! David, an LSU fan at heart, was much more animated during the game than I was. I was trying to keep myself together as much as possible, but I was seriously struggling. I’ve learned throughout my trips that my body knows when it’s done running and breaks down a bit. My legs had begun to swell up, my knees ached, and my left achilles felt like it was going to tear in half. Nonetheless, I had an amazing time at the game, and I’ll never forget it.

The upset created one last memorable experience, getting to go onto the field at Death Valley. We couldn’t pass it up, and I finally had found my perfect moment to thank Drew for his great donation. 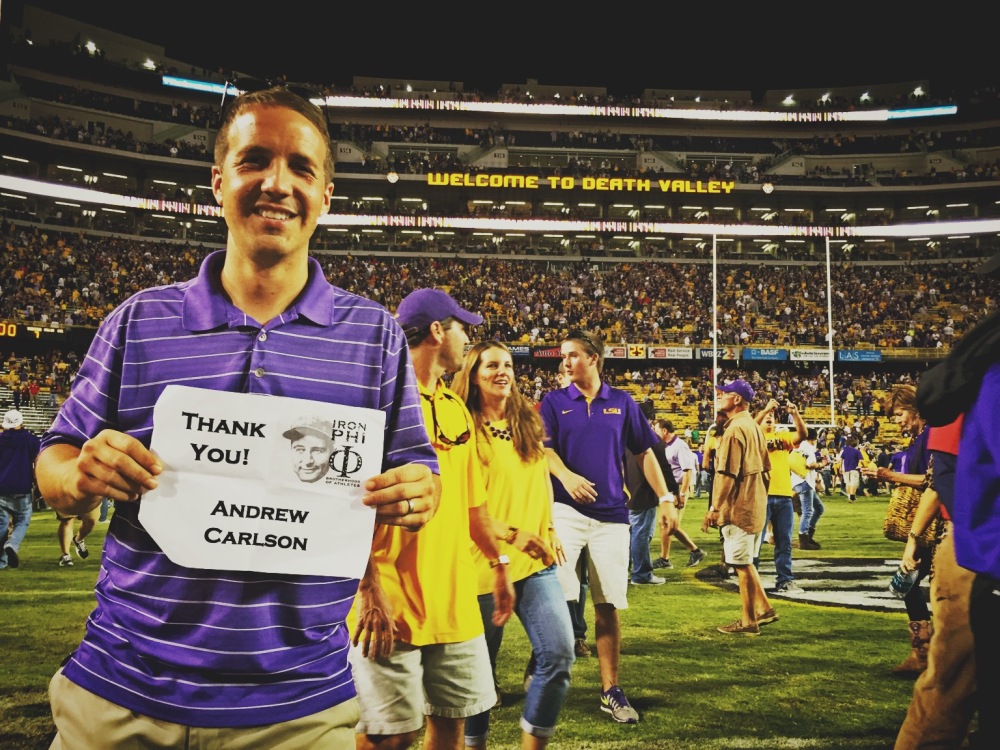 Last, but not least, I followed David’s lead with a picture of me tasting the grass at Tiger Stadium. LSU’s coach Les Miles is one of the best coaches in the country, and his tasting of the grass at the stadium has become a legendary moment. The pose made for a great picture, despite the swelling of my feet and ankles! 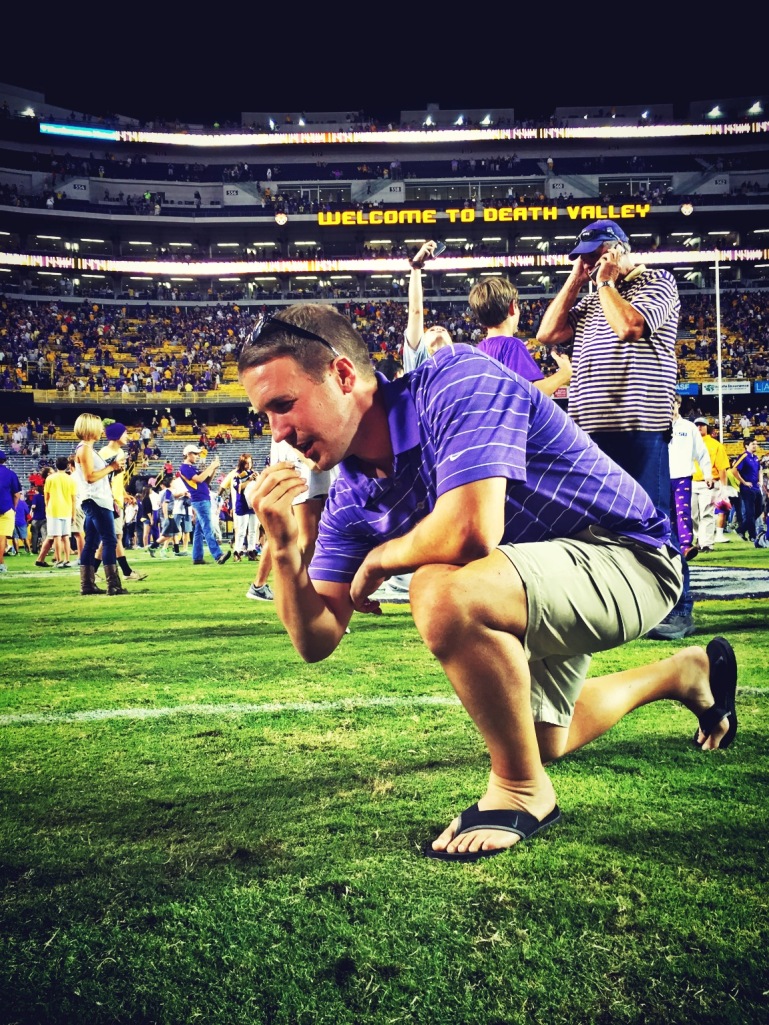 Following the game, we battled traffic out of Baton Rouge. David and I traveled to Lafayette where he lives and where I would be flying out of the next morning. The trip had come to an end, and I was more than ready to go home. It was an amazing week that I will be recapping in a post to come.

Upon arriving home, I found a shirt from the Louisiana Marathon crew. While I wasn’t able to wear it during the trip, it will help me remember my great day in Baton Rouge.