Day six was shaping up to be my most grueling day. The plan was to wake up in Fairhope, Alabama, drive an hour to Pensacola, Florida for a 10-mile run, drive back to Fairhope to shower, drive to Mobile, Alabama to drop off the rental car and pick up the Megabus, arrive in New Orleans at 8pm and spend the evening with two friends. One day, three states! Why not? For breakfast, I was able to sample William’s line of bacon, Billy’s Small Batch Bacon. I’ve never had tastier bacon, and I wasn’t surprised to learn that the pigs come from Iowa! William sent along a bag of cooked bacon as road jerky, which I later used to make friends on the Megabus.

Pensacola was a quick hour drive from Fairhope. If I had more time, I would have taken the back roads, but I-10 it was. Upon arriving in Pensacola, I stopped by the Pensacola Sports Association. I was able to connect with Jason Libbert leading up to my time in the city, but unfortunately missed him that morning as I was running a bit late. Jason’s colleague Mykel Travis welcomed me, answered a few questions, confirmed that I would not get arrested if I ran the 3-mile bridge later that day and hooked me up with a Pensacola Marathon running shirt. The bright yellow color was very fitting for this beautiful little Florida city.

I started my run in downtown Pensacola, and the goal was to run to the Gulf of Mexico, about 10 miles south. The trick about the run would be the two bridges that I would need to cross, one being Pensacola’s famous 3-Mile Bridge. I was a bit nervous for the run. By day six, I’m generally pretty tired, and four miles on bridges running against traffic is always a bit intimidating. My first stop was the Pensacola Bayfront Stadium, home to the Blue Wahoos! I didn’t realize that they are a Cincinnati Reds affiliated team. Go Redlegs and go Blue Wayhoos. I thanked the Fort Dodge baseball team for the final time.

Just behind the stadium, I found this great amphitheater with a killer view of Pensacola Bay. I thanked Shane & Jenna Omann for their donation. Like Haley Abel who I thanked in New Orleans, Jenna is a sister of my best bud Travis, and I grew up right across the street from her. Jenna married her high school sweetheart Shane Omann, and the two of them live in Charlotte, North Carolina with their awesome Great Dane. I hope to connect with the two of them when I’m in Charlotte in early 2015.

My next stop was Historic Pensacola Village, just east of the main business district. The Historic Pensacola Village is a collection of 22 historical buildings and museums owned and operated by the University of West Florida. Here, I thanked my colleague Debbie Smith. Debbie and I share many laughs every time we see each other, and we used to be office neighbors in Oxford. We share a love for dogs, and Debbie has rescued many a dog in her lifetime. When I was working in Oxford, we generally started our week with a ridiculous dog story from the weekend as we both had many in our arsenal.

As I headed east to the 3-Mile Bridge, I found this along the side of the road. Pensacola has many military ties. A large United States Naval Air Station, the first in the United States, is located southwest of Pensacola. It is the base of the Blue Angels flight demonstration team and the National Naval Aviation Museum. I thanked Michael Bruning for his donation. Michael is in his first year as a Leadership Consultant for Phi Delta Theta and is from the great state of South Dakota. He’s also a Kansas City Royals fan is having a heck of a time right now. Michael stayed with us in Ames not too long ago when he was in town working at Iowa State. We had the opportunity to do a Cyclone game day, and he also got to see the craziness at the Good household.

In the three years that I’ve been doing these trips, I’ve had very few moments that were truly intimidating. Many people ask me if I ever get nervous running through the “bad parts of town,” and to be honest, I don’t think I ever have. I’ve actually learned to embrace many of these areas as you can generally find very neat revitalization efforts. I’ve also learned that a smile and a head nod goes a long ways when you’re running, and that getting lost can offer many positives. But today I was intimidated. Not by an area or a person, but by a structure – Pensacola’s 3-Mile Bridge. The bridge connects Pensacola to Gulf Breeze, has a raised area in the center and offers no official pedestrian lane with a lot of traffic going 40-55 mph. I get crazy ideas, but I’m really very conservative when it comes to safety. This was a bit outside of my comfort zone. I found a nice vantage point that captures the length of the bridge. The bridge runs the waterline, and you can see the raised area a bit. Here, I thanked Doug Wiles, a Phi Delta Theta regional volunteer,  a proud Floridian and a Florida Gator. Doug is one of the nicest and pleasant men that I know. He always wants to help. I saw Doug twice this year, once in Jacksonville and once in Las Vegas. 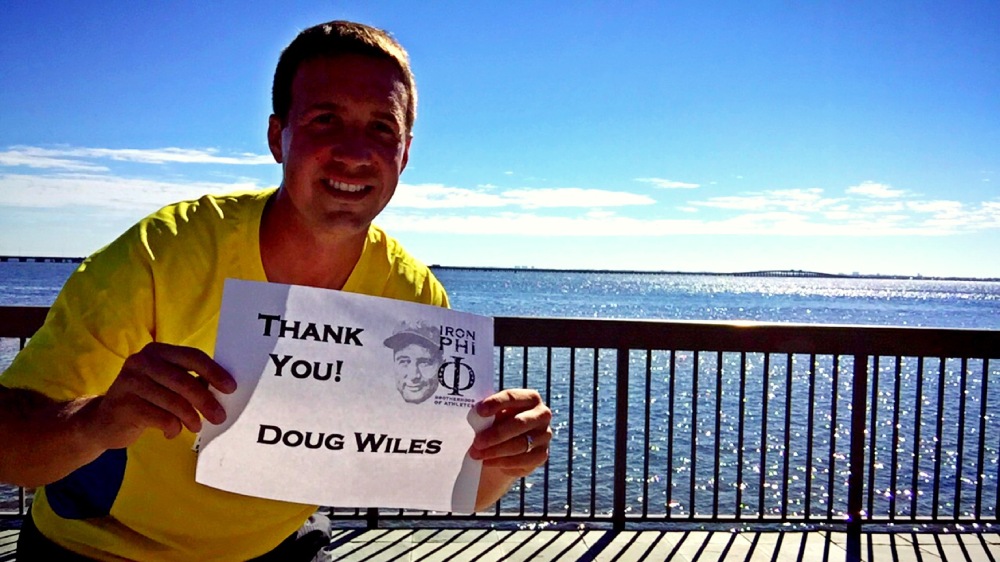 As my nerves began to build a bit running to the bridge, this sign didn’t help. My fuel was on a quarter tank, but I knew I’d be good.

I hopped onto the bridge, found the shoulder and knew that it was go time. The experience itself was exhilarating. The weather was beautiful, the breeze was just right, traffic respected my space, and I even got a few fist pumps and supportive honks. I saw one other cyclist on the bridge which was a bit tricky since he was riding with traffic and I was running against traffic. 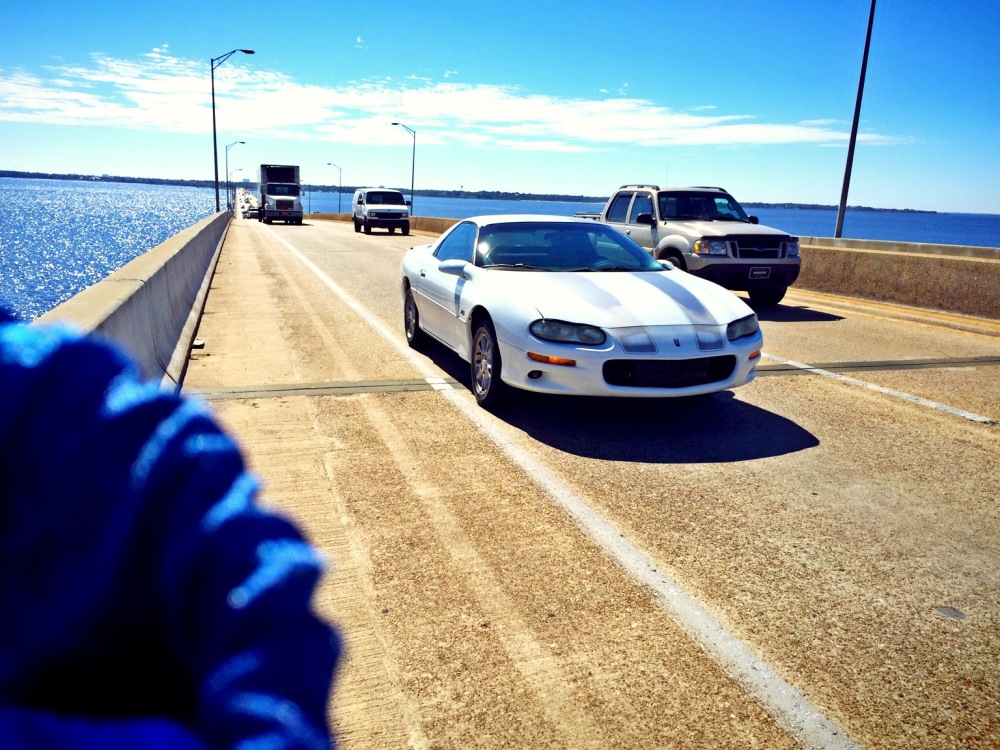 I made it to Gulf Breeze which is a narrow little town between Pensacola and Pensacola Beach. I was supposed to thank Renee Crist on the white sand of the Gulf Islands National Seashore, but I realized that this would add another two miles to an already long route. I did find some white sand, next to one of the area’s bright seaside buildings. Renee is a long-time employee at Phi Delta Theta and recently became our first female Iron Phi, a proud moment for many of us. She also recently drove her motorcycle from Ohio into the area. While I don’t know her entire route, I do know that she visited New Orleans and had dinner at the Old 27 Grill in Fairhope during her travels.

I then ran to my second bridge of the day that connects Gulf Breeze to Pensacola Beach where I found this awesome welcome sign. I thanked my colleague Luke Benfield for his donation. Luke is from Florida and tied the knot with his new bride Sarah this weekend. I took a moment to send him a congratulatory text and kept heading south. 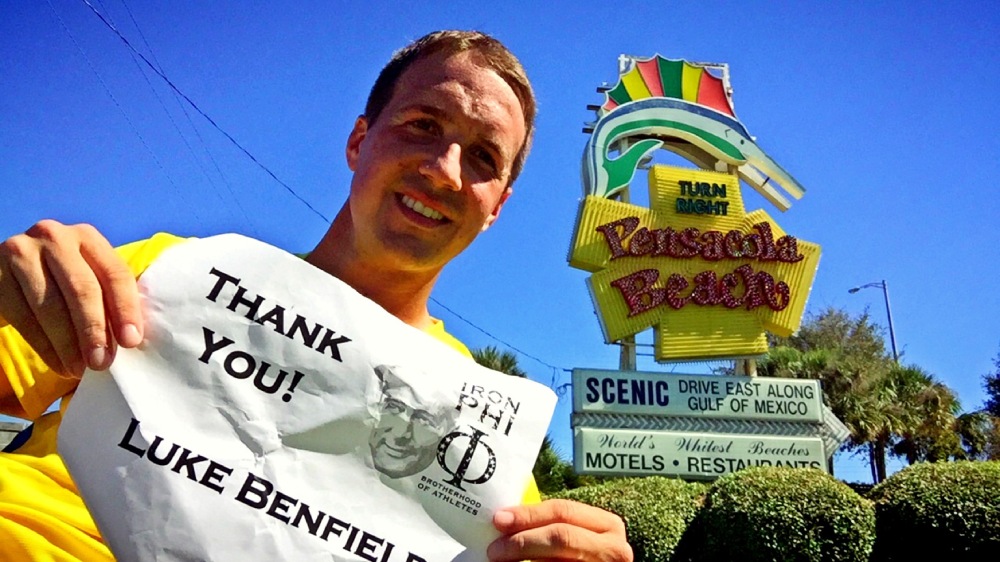 There are a number of bridges and piers in the area, and each provides many unique things. You can always find people walking the piers and fishing from them. At one of them, I thanked Jason Brannon once again for his donation. 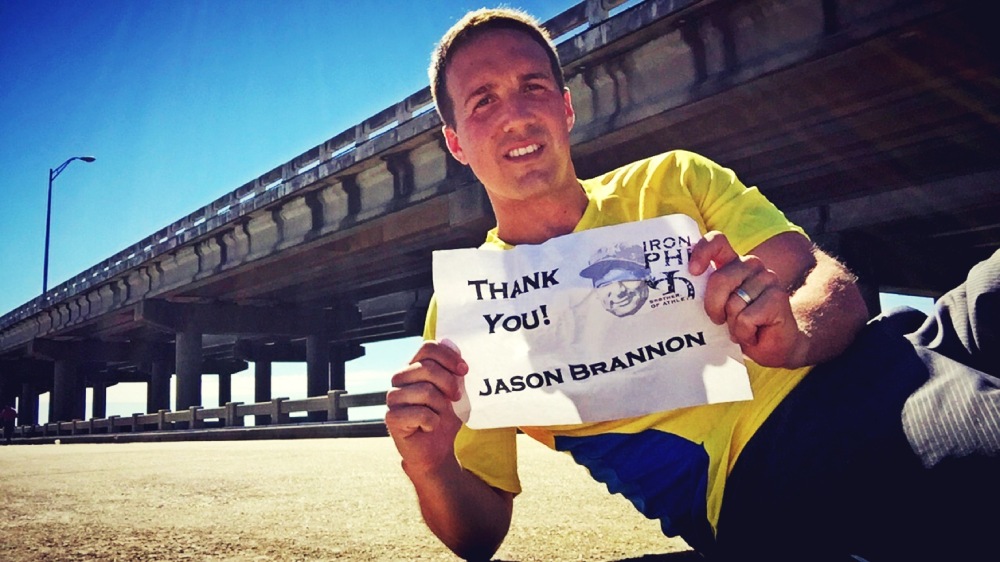 I was relieved to reach Pensacola Bay and the Gulf of Mexico. It was a picture perfect day, and I spent a bit walking around the area. Resting on the beach, I thanked Ross Roti once again.

I also found a fun seashell marker at Quietwater Beach where I thanked fellow Phi Delt Dallas Short. Dallas and I share a love for social media and music, and it’s been fun to watch him navigate the New York City life. Dallas went to the University of Miami and is a passionate Hurricane fan. 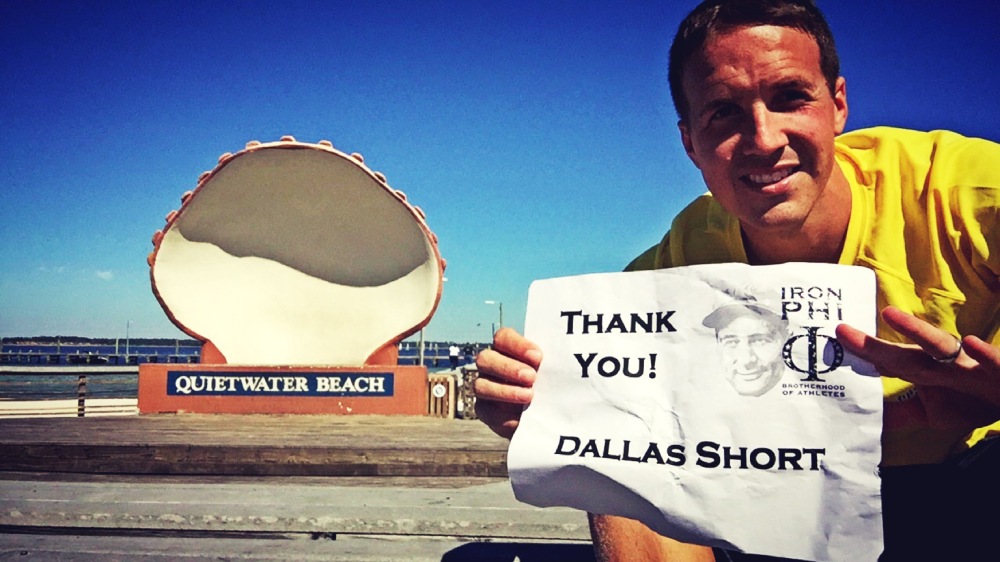 A great reward for completing the long run was a quick swim in the Gulf of Mexico. Just before cooling off, I thanked Jeremy Sale, another Phi Delt from Mercer University. Jeremy and I ran together for two of my days during last year’s trip – Atlanta and Athens, Georgia. Jeremy has become an endurance athlete over the years and participates in countless events throughout the year. His job recently took him from Atlanta to Miami, Florida.

Another view of the Gulf of Mexico. The water was crystal clear!

Just before jumping in a cab to head back to my car, I made my final thank you to Tyler Cronk. I had outdone myself a bit, but was proud of the day’s run.

I jumped in my car, grabbed a bite to eat, and took a few final pictures of the awesome military-themed in Pelicans in Pensacola.

Upon arriving back in Fairhope at William’s to shower, I was surprise to find another Phi Delt volunteer at the house. I’ve known Nat Love for quite some time. Nat has worked for Meijer in Grand Rapids, Michigan for years, and I was able to see him often when Tillie was in grad school at Grand Valley State University. Nat went to school at Michigan and was in town because his parents live nearby. It was great to see him! 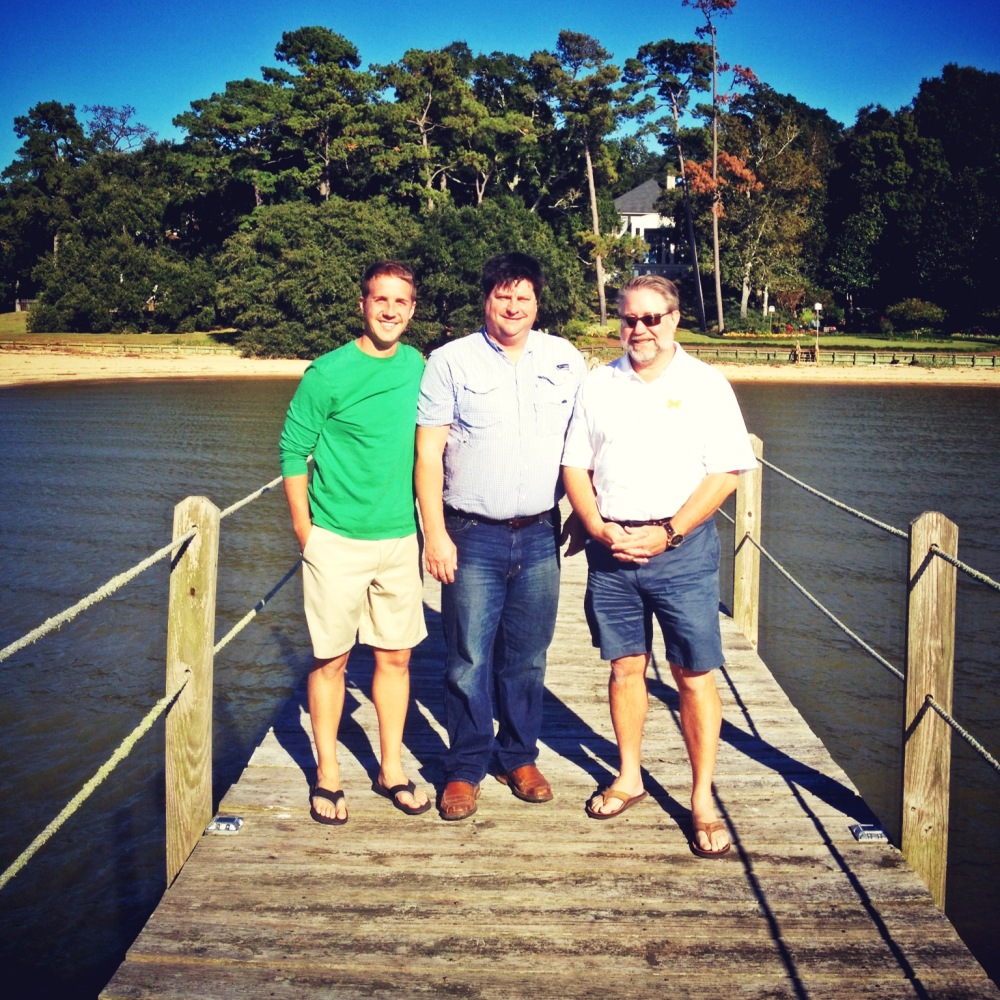 I drove back to Mobile, dropped off the rental car and took Megabus to New Orleans. After checking into my hotel for the evening, I met up with former colleague David Wyble and current colleage Ben Putano for a night on the town in New Orleans. The three of us spent the weekend together in both New Orleans and Baton Rouge. We had a great time and spent the evening on Frenchman Street in New Orleans, one awesome place. We made it a fairly early evening (for New Orleans standards) as we had a big day in front of us. 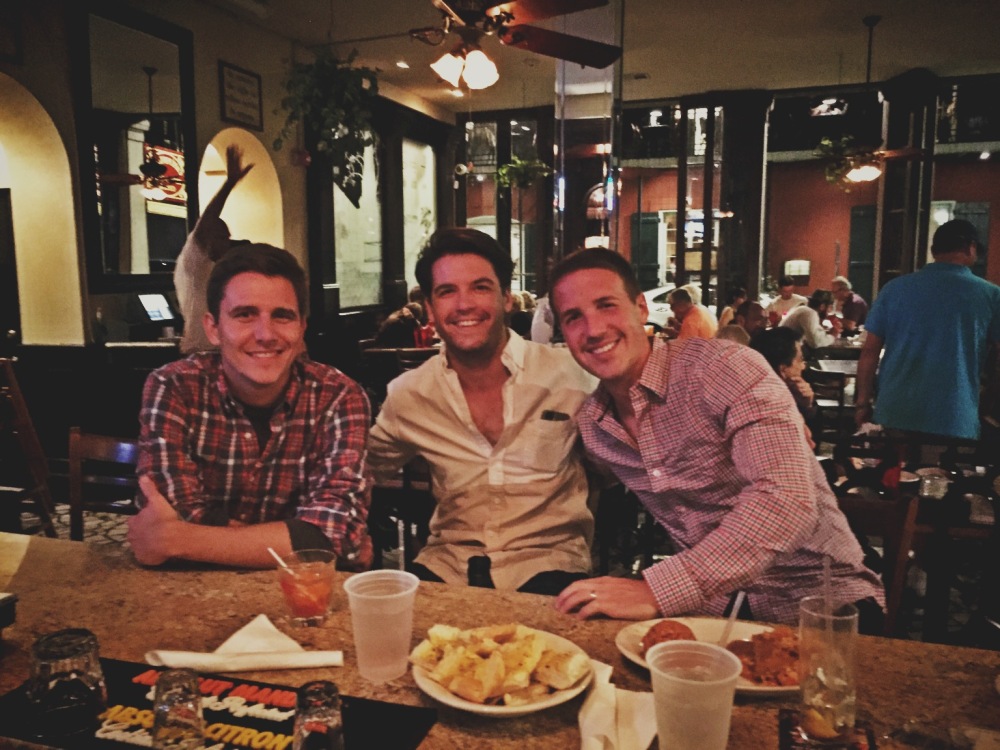