Asheville, North Carolina has been at the top of my travel list for awhile, so I was extremely excited to visit. We knew that hills would be a part of our route through the city, but we also knew that we would be rewarded with a plethora of breweries offering their recipes. Asheville has become a destination for craft beer aficionados, and with it being November, the hipster mustaches were in full effect.

En route to Asheville, we drove through Lake Lure, the home of many scenes from Dirty Dancing. Brad and I had been practicing our lift all week, but when we realized that we had left our swimsuits at home, we decided to proceed ahead. You are all better off for it. Lake Lure is gorgeous, and the fall foliage offered a scenic backdrop! 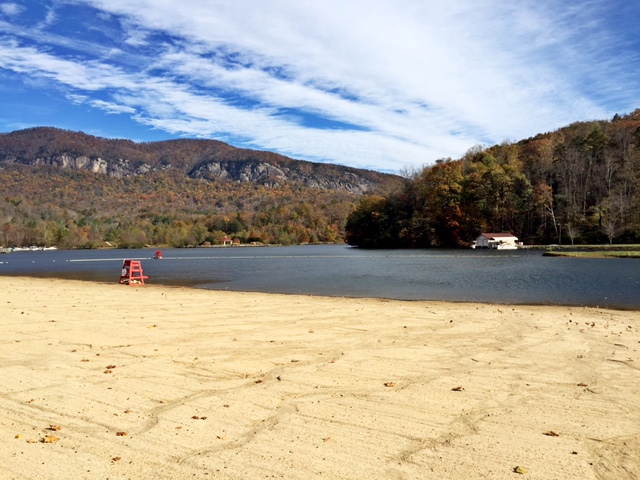 Just west of Lake Lure, we arrived in Chimney Rock, home of one of the most impressive views in the country. After purchasing tickets, winding up the mountainous road in our car, and parking, we soon realized that the elevator to the rock was out of order. No big deal. Unless you’ve been on a week-long running bender! We struggled up the 500 stairs to the top. 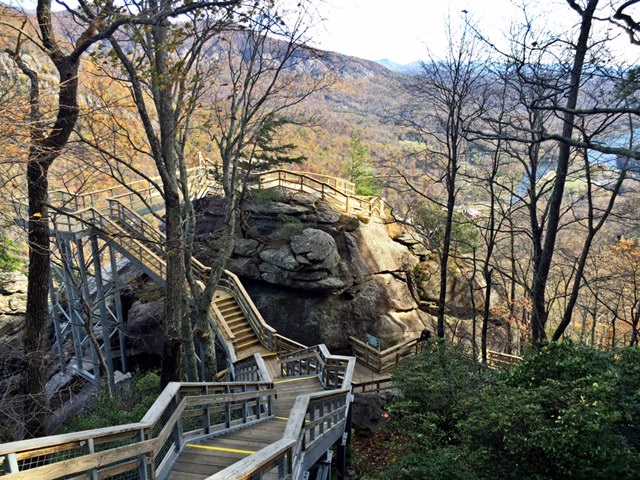 But the views were worth it.

Upon our arrival in Asheville, we stopped by the offices of the Asheville Marathon, where events extraordinare Daphne Kirkwood had set aside a couple of shirts for Brad and me. I always love chatting with people who plan races. In general, they are some of the nicest and most philanthropic people around. Thank you Daphne. I definitely have one of my new favorite running shirts!

There are people in life who you will always remember, and I knew that our stay with Betsy in Asheville would be memorable. When I was initially looking for places to stay in Asheville, I found Betsy’s place – The Tarot House. After seeing the amazing pictures of her home, learning that she was a librarian (my mother was a librarian), and learning that she has a cat named Tilly (my wife’s name is Tillie), it was a sign that this was the place I needed to stay. Betsy was such an amazing host from the get go. She loved what we were doing, linked me up with her son for some running recommendations and was just great with communication.

Betsy’s house was so unique, and I loved everything about it. The house’s radiators, both the look and the sounds, reminded me of my grandma and grandpa’s house. The house was alive with plants and filled with fun pictures, furnishings and trinkets. 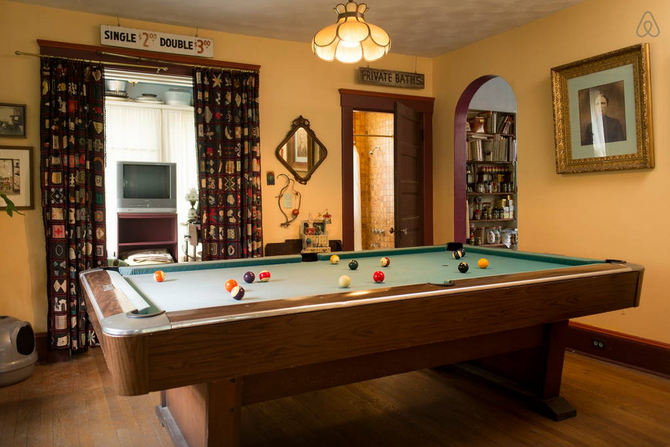 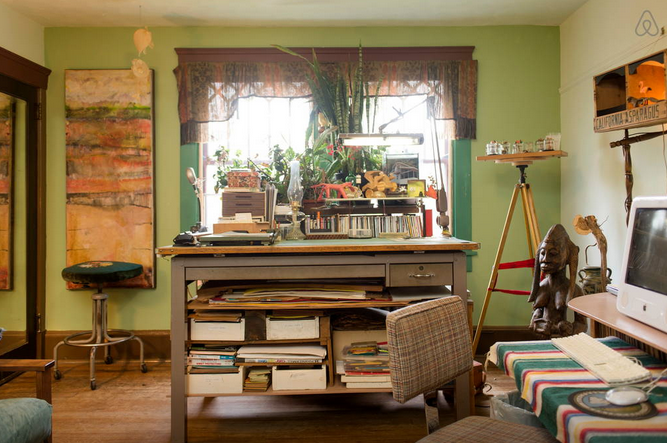 Life is about new experiences, and Betsy helped the two of us check another item off of our bucket lists that evening – A tarot card reading! The experience was great, and I loved seeing Betsy in her element. At the end of the day, the reading of tarot cards is another mechanism to get people talking about their lives in order to improve. Respect!

My new friend Tilly the Cat that ironically looks exactly like the cat that our family had when I was a child.

The day’s running route was filled with wind, fun sights and breweries. It was a balmy 51 degree day. We initially had the goal of sampling a flavor at each of the 10 breweries that were on our list, but the trip had caught up with us. Plus, drinking and running is dangerous kids. This didn’t stop us from running by each of them. If you’ve read posts from my past trips, you’ll know that murals are a popular stop for my Runner’s Choice stops. I really hadn’t seen many great murals during the trip, but I’m sure they were hiding somewhere. This guy couldn’t hide from us. I thanked Joe & Jess Vonsak again.

Our next stop was the Grove Arcade. While I was hoping for Pac Man and Tecmo Bowl, I was greeted with high-end shops. I thanked Sean & Michelle Wagner for their donation. Sean and I are on year 12 of working together at Phi Delta Theta. I have reported to him for 11 of those years, and I could not ask for a better colleague. Sean is one of the most dedicated guys I know, and he truly cares for the people with whom he works. Sean & Michelle just had their first child, Elise! Tillie and I couldn’t be happier for them. Shout out to my main Yorkie-maniac Buddy.

Our next stop was the Basilica of Saint Lawrence where I thanked Debbie Smith once again. My persistent photographer (Brad) noticed at this stop how dedicated Debbie was to my trip this year. So very true! Debbie, you’ve been named the 2015 Running Trip MVP. I have no prize, but I should create a fun gift for the MVP each year. Hmmm.

Our next stop was the Thomas Wolfe Memorial Visitor Center where I thanked Carl & Jan Bethmann again. Considered by many to be one of the giants of 20th-century American literature, Thomas Wolfe immortalized his childhood home in his autobiographical novel, Look Homeward, Angel. Wolfe’s colorful portrayal of his family, his hometown of “Altamont” Asheville, North Carolina, and “Dixieland” the Old Kentucky Home boardinghouse, earned the Victorian period house a place as one of American literature’s most famous landmarks. I thanked Carl & Jan Bethmann again for their donation. 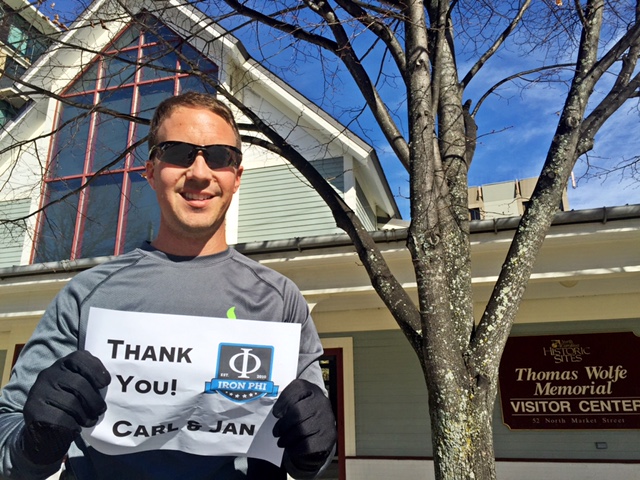 Asheville is an artsy place, so we had to run past the Asheville Art Museum. I decided to take a picture next to a piece of art across the street rather than the museum itself. Brad will tell you after this trip that I’m a horizontal picture snob. I’m not sure where the disdain for pictures taken vertically began, but it’s probably something that I need to work on in the future. Brad had been encouraging a vertical photo the entire trip, and I finally gave in. It was a great recommendation. I thanked my buddy Steve Huang. I love commenting about Steve, because he is really the only former airplane seatmate who is still in my life. I’m not much of a socialite on planes, but Steve and I had great conversation on a flight to Des Moines a few years back. We’re now Facebook peeps, and he so graciously supports my cause each year! 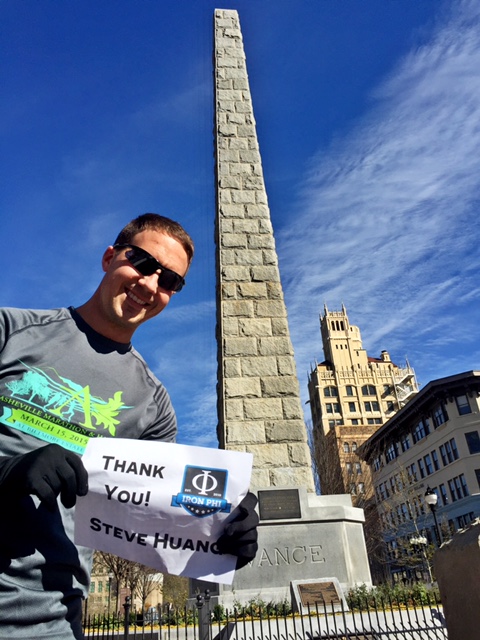 What’s the best oversized object that an Iron Phi can find? An iron of course. No other commentary needed. I thanked my favorite Oklahoma State Cowboy Mike Hyatt once again for his donation. A night later, Brad and I watched another Cyclone heart breaker against the Cowboys. So is life.

Immediately across the street from the Flat Iron Statue is the Jackson Building, a structure that appears to have had a nasty run-in with its streetmate. I thanked one of my most well-pressed friends again for his donation – Andy Tomka.

Now, to the breweries. Asheville is home to the eastern operations of Sierra Nevada and New Belgium is building a giant space just outside of town. Those are the big guys in town, but the beauty remains in the small guys. Simply put, you can find some great beer in Asheville. I’m not really one to critique beer, so if you’re here for a recommendation, I only have one – Yes. I thanked Keith Wysocki at the Lexington Avenue Brewery.

And then Brad & Kelly Becker at the Thirsty Monk.

In between breweries, I found a great Runner’s Choice for my sister and brother-in-law – Anne & Don Davidson. Just a random double-decker bus that serves coffee and desserts. My sister and brother-in-law live in Omaha with their two boys and three dogs. I’m lucky to have one of the most supportive sisters in the world, and she always likes to pick the Runner’s Choice options on my trip. I agree that these are the most fun. For the record, Double D’s (Don Davidson), not for my sister!

The next brewery was Wicked Weed, one of the more popular places in town. Brad and I had dinner at Wicked Weed later that night, and for some reason, Brad ordered gourmet corn nuts as the appetizer. One of my favorite donor landmark selections of the 2015 trip, my buddy Scar selected Wicked Weed. See, Mike Scarlatelli is Phi Delta Theta’s Warden, the guy who maintains order at conferences, conventions, etc. This landmark only made sense. 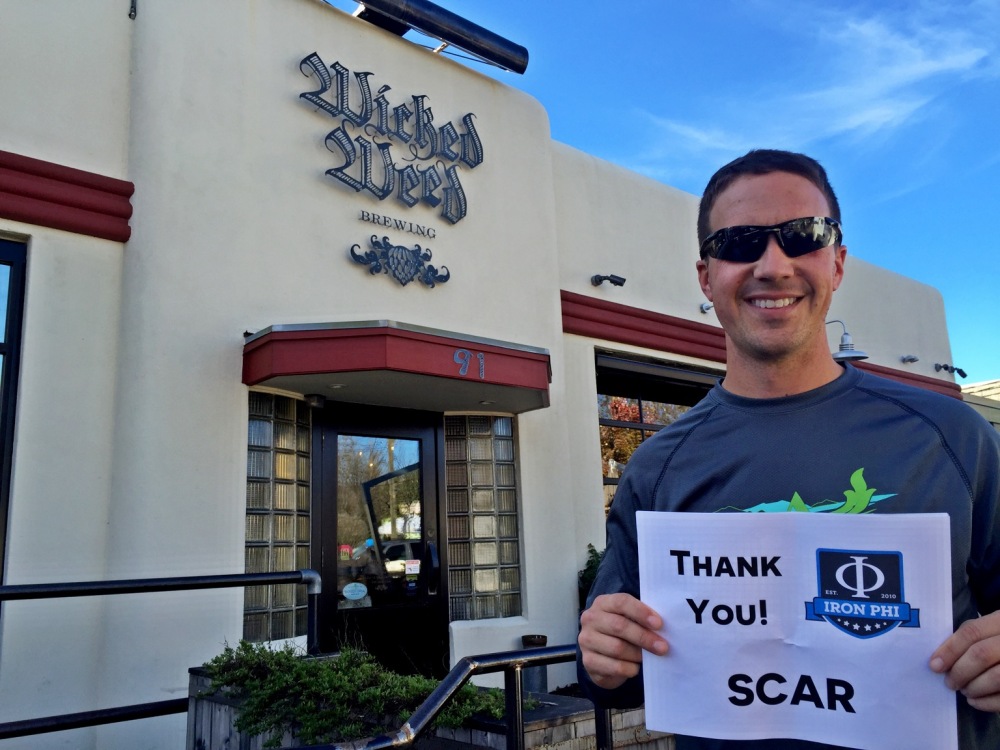 Asheville Brewing Company was our next spot, a place that offered a great outdoor patio. You’re not a hip craft brewery if you don’t have a sweet outdoor lounge with lights. The lack of outside crowd proves that it was cold. I thanked my former colleague Jacob Kingdon. I’ve had many memorable experiences with Jacob, but my all-time favorite moment with Jacob was alongside the Delta peanut man on a flight. No details are necessary, but I’ve never seen a grown man laugh so hard in my life. Jacob and his wife Megan live in Cincinnati with their three kids.

A stop at Hi-Wire Brewing to thank the 2015 MVP. We later watched the Iowa State basketball home opener at Hi-Wire, and I let a brewery dog lick the salt off my face.

A stop at Twin Leaf Brewery was also dedicated to Jacob.

And a stop at Green Man Brewery to thank my college friend Riley Smith. I always like to do something really fun for Riley’s picture, so we went inside to see what we could find.

Riley was in luck as we found a beagle, wearing a harness, sitting on a table with an American flag in the background.

And a friendly three-legged dog. Success!

The last of the breweries was Burial Beer Co. where I fittingly thanked Scar again. 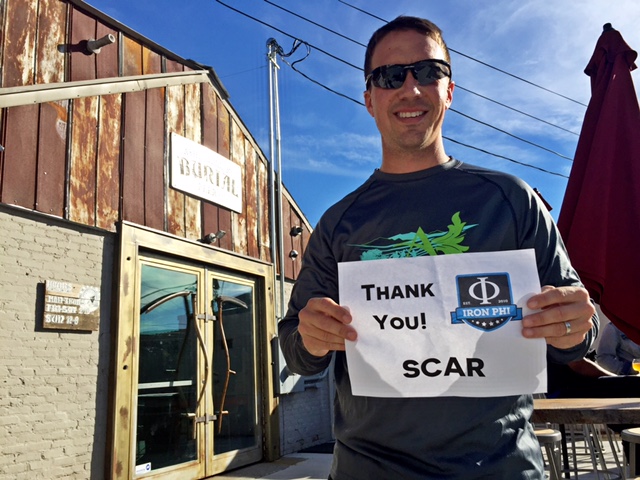 The only real disappointment of the trip was about to happen. I had purposely saved the Biltmore Estate for the Etler family. The Biltmore is the main attraction in Asheville and one of the most beautiful houses/estates in the country. I was soooo excited for the picture that would have come out of the stop. Brad and I made sure to get to the Estate before it closed and had run about 7 miles to get there. When we arrived, we were told that you can’t enter without a car. We obviously didn’t have a car, so we considered trying to Uber back to our car to get it. That is, until we realized that it would have cost $60!!!!!! each to get to take a picture and leave a few minutes later as they closed. I was a bit peeved, so we simply turned around. I made it up to the Etlers in Knoxville.

Despite our Biltmore experience, we had an awesome time in Asheville. If you have never been here, get here! It’s great. 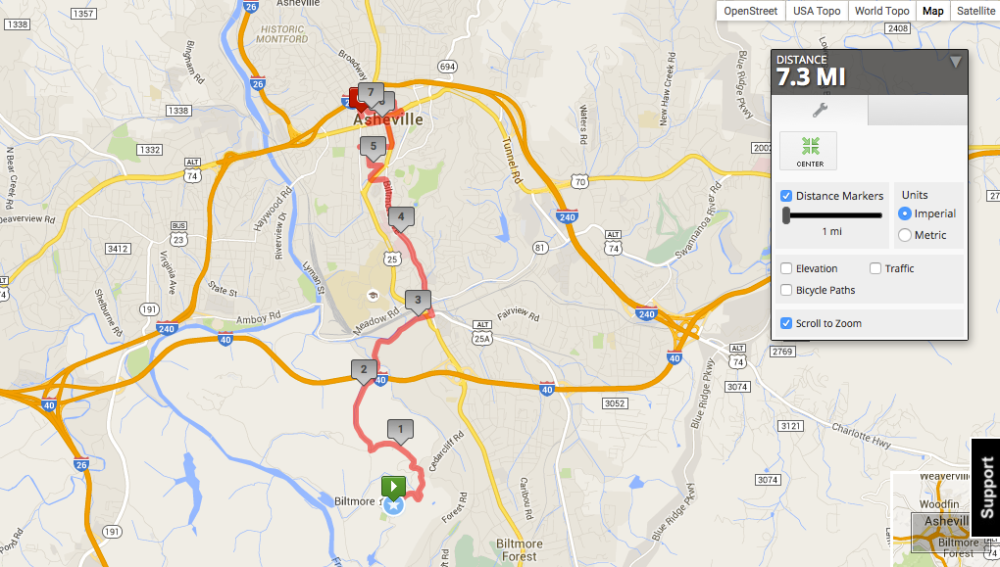 On to Knoxville, Tennessee!