After a glorious evening in the Austin Airstream, it was time to head to San Antonio, Texas for my second running day of the trip. After packing up and catching a ride on Austin’s bus system to campus, I arrived with enough time to grab a bite to eat and catch my good old friend – the Megabus. As you may or may not know by now, my love affair with Megabus has entered its third year. It’s a vital part of my trip, and my route each year revolves around the Megabus route map. Here’s a stat that will capture the power of Megabus. After the end of this trip, I’ll have taken Megabus 19 times. My bus tickets have collectively cost me $35! I’ve become a Megabus scheduling master in order to grab the $1 seat on most trips. I’m 12/12 the last two years! Besides the price, the buses are clean, have wifi and plug-ins at each seat and get me there on time. What else can you ask for? 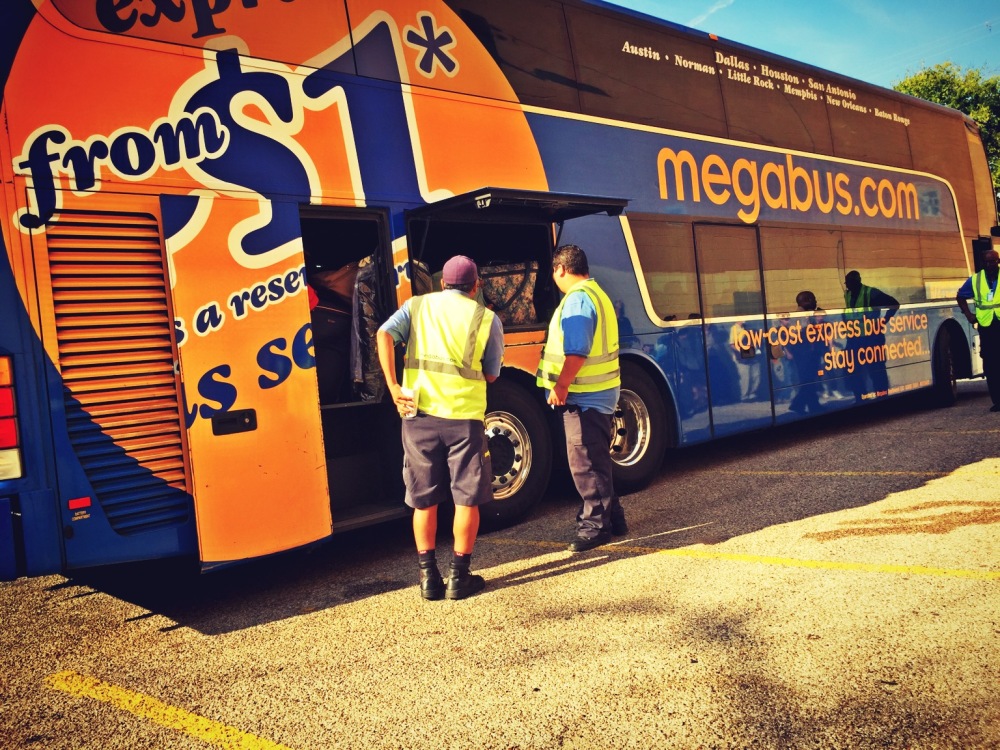 The trip to San Antonio was a quick 1.5 hours, giving me enough time to secure my running route for the day and get a little work done. Technically, San Antonio is the 7th largest city in the country, but it’s a bit misleading. Its generous city limits make it seventh in area, but after doing a little research, its metro population is 25th in the country. You learned something today didn’t you? After arriving in San Antonio, I had a mile walk to my Bed & Breakfast. A mile seems very short when you’re walking along the fabled River Walk in San Antonio. 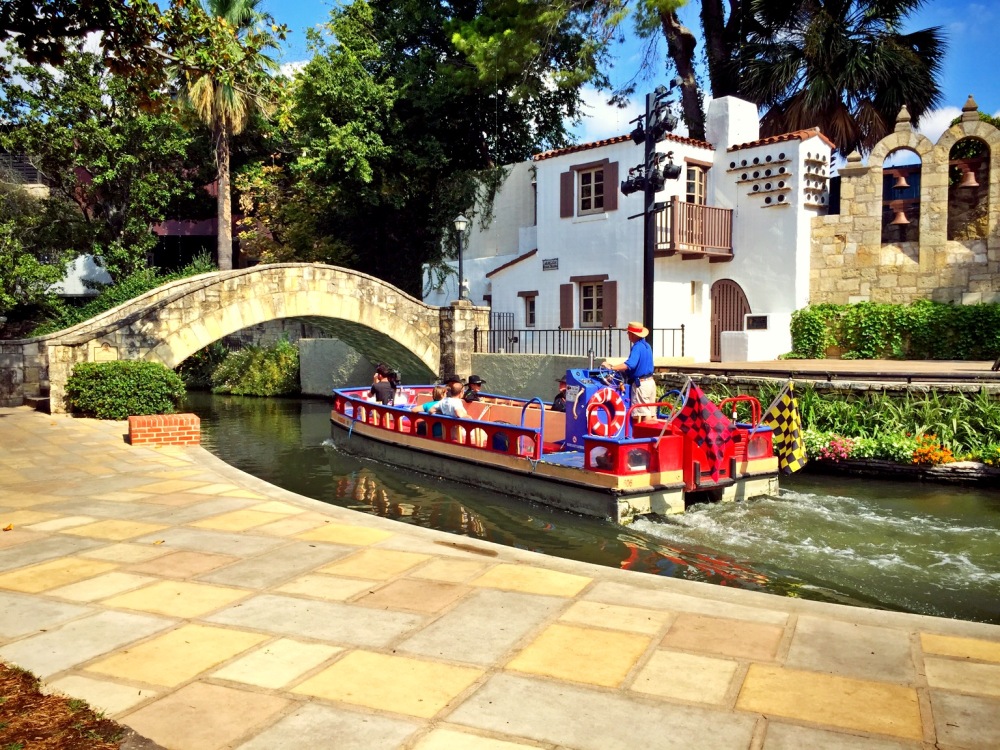 Upon arriving at The Inn on the Riverwalk, I knew I was in for a treat. I learned about the Inn through Airbnb, and Johanna at the Inn was kind enough to host me. What I didn’t know is that they were putting me in the Honeymoon Suite! Now, if only I had my bride with me. The Honeymoon Suite comes with a nice whirlpool and a killer view from the deck. Can’t beat it. The location is great as it is along the River Walk and just a few minutes down the river from the main district. Cozy, comfy and very convenient! 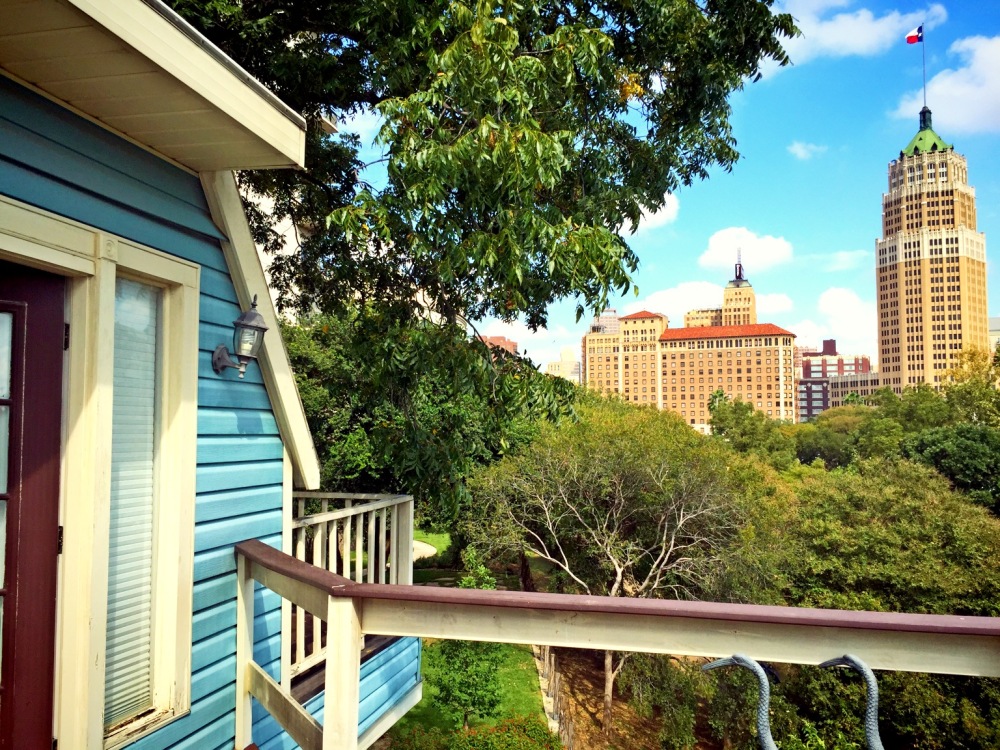 At the Inn, I thanked my colleague Laurie Rosenberger for her donation. Laurie has been a rock at Phi Delta Theta for years. One of my favorite pictures at the office is of Laurie and Renee Crist (another colleague) during their early years at the Phi Delta Theta General Headquarters. I won’t attempt to guess what year that was (for obvious reasons), but I love the picture because it shows how loyal they have been to the organization. They’ve seen many people come and go, yet they continue to march along, helping the organization succeed. I greatly admire this quality. 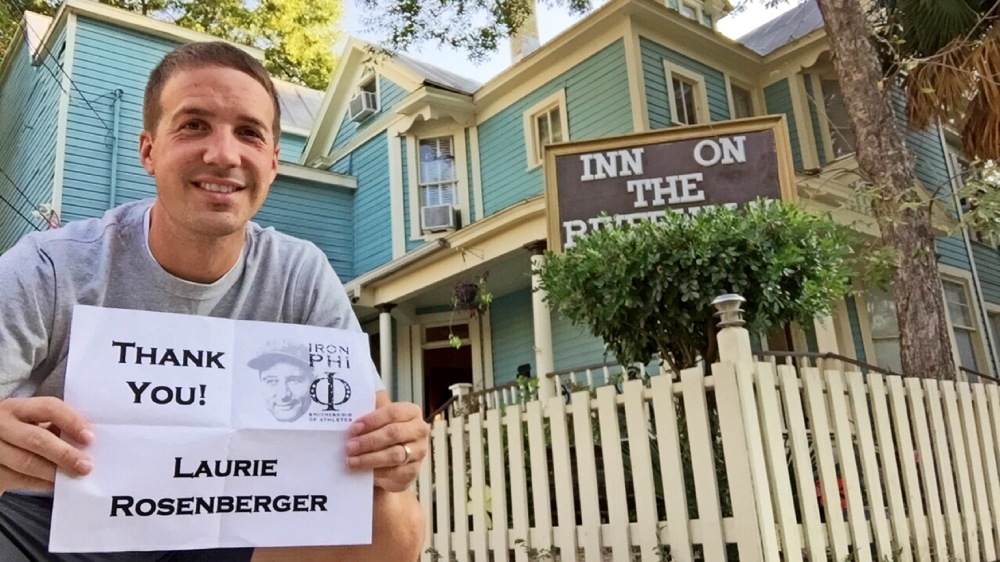 Soon after checking in, I headed out for the day’s run, conveniently timed during San Antonio’s mid-day heat. Just down the road from the Inn was my first stop, the Tower of Americas. The Tower of the Americas is a 750- foot observation tower/restaurant located at HemisFair Park on the southeastern portion of Downtown San Antonio. The tower was built as the theme structure of the 1968 World’s Fair. Assuming that there is quite a bit of steel in the Tower, I thanked my favorite steel guy Craig Rubemeyer. Craig was one of my Leadership Iowa classmates and is a standout fella with a killer sense of humor. I’ll always remember Craig’s heartfelt 5 Minutes of Fame presentation to the class and a tough-to-forget ride on a party bus in Creston, Iowa. Craig works for SSAB, a Swedish steel company in Montpelier, Iowa. 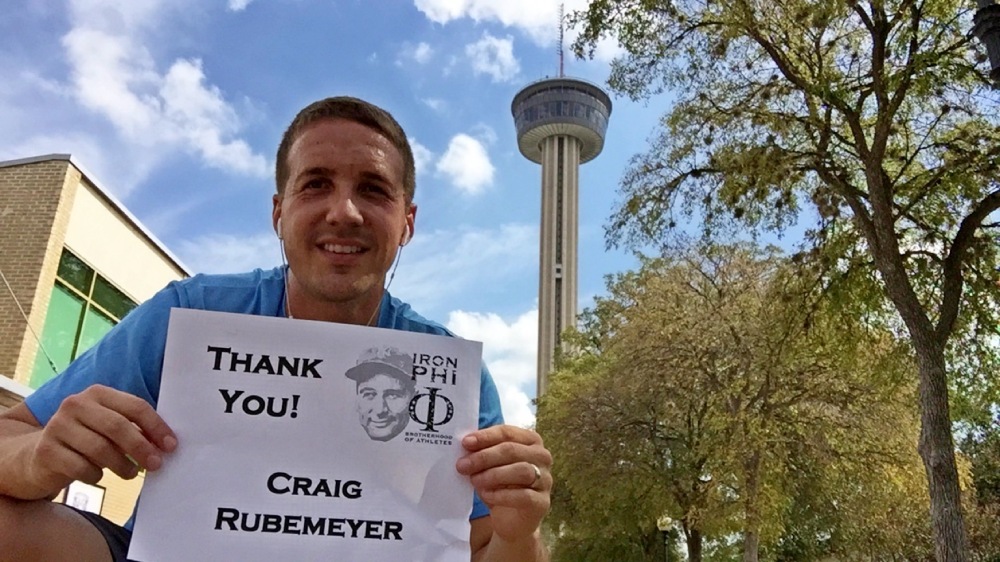 From the Tower, I headed to the Alamodome where the San Antonio Spurs played for a decade. Today, it hosts conventions, sporting events and other large-scale events. Here, I thanked Mike Hyatt for the first time of the day. Mike is a fantastic Phi Delt volunteer, and we love the back-and-forth banter that my Iowa State Cyclones and his Oklahoma State Cowboys give us. Mike was also gracious enough to make a donation that covered all of my San Antonio landmarks. Amazing generosity, but it didn’t surprise me with Mike. Mike is one of the most well-traveled men I’ve met, and I always love picking his worldly brain for where I should visit next. I’m not sure if I’ll ever catch up to him, but I’m sure as hell going to try! Thanks Mike, you’re awesome. 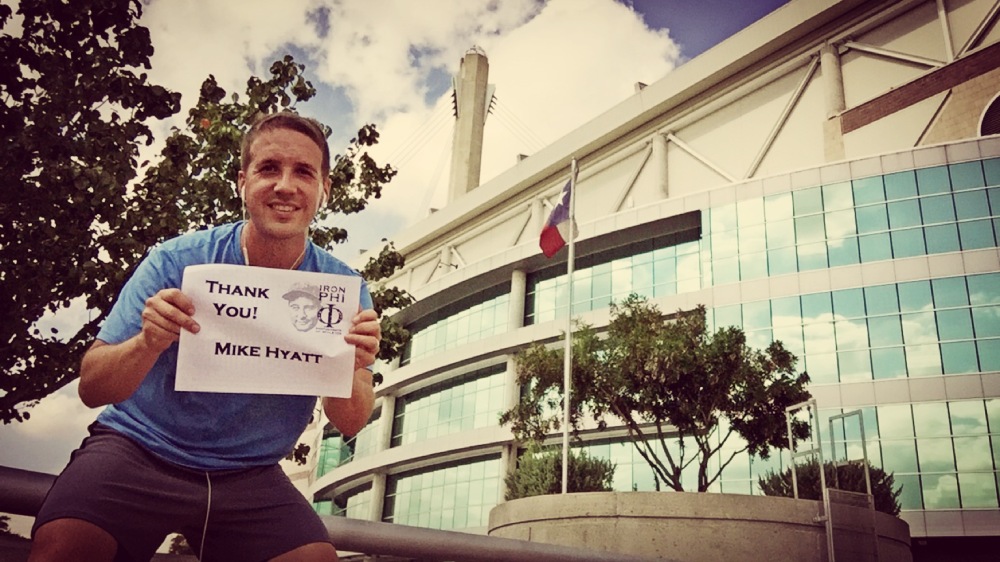 From the Alamodome, I headed back downtown towards the Alamo. Just around the corner is San Antonio’s most famous hotel and bar – The Menger Hotel & Menger Bar. The original Menger Hotel was constructed on the site of Menger’s brewery, the first brewery in Texas. Opening on February 1, 1859, “the finest hotel west of the Mississippi River” was host to such notables as Sam Houston, Generals Lee and Grant and Presidents McKinley, Taft and Eisenhower. Teddy Roosevelt even recruited the Rough Riders in the Menger Bar. How about that for history?! Quite the place. Here, I thanked my great pal Ross Roti. I was the benefactor of Ross’ slick avoidance of doing the Ice Bucket Challenge. Ross is one of my best friends and Iowa State football and basketball seatmate. He’s known in our football section as the guy with the Schiltz hat. He’s is the main harasser of fans in the stadium who wear Iowa Hawkeye gear to games in which the Hawks aren’t playing, but counters this as the main supporter of struggling fathers carrying way too many concessions up stairs for their families. He’s known at Hilton Coliseum as the individual with the greatest winning percentage for the Basketball Shuffle scoreboard game. Pure talent that Ross guy. 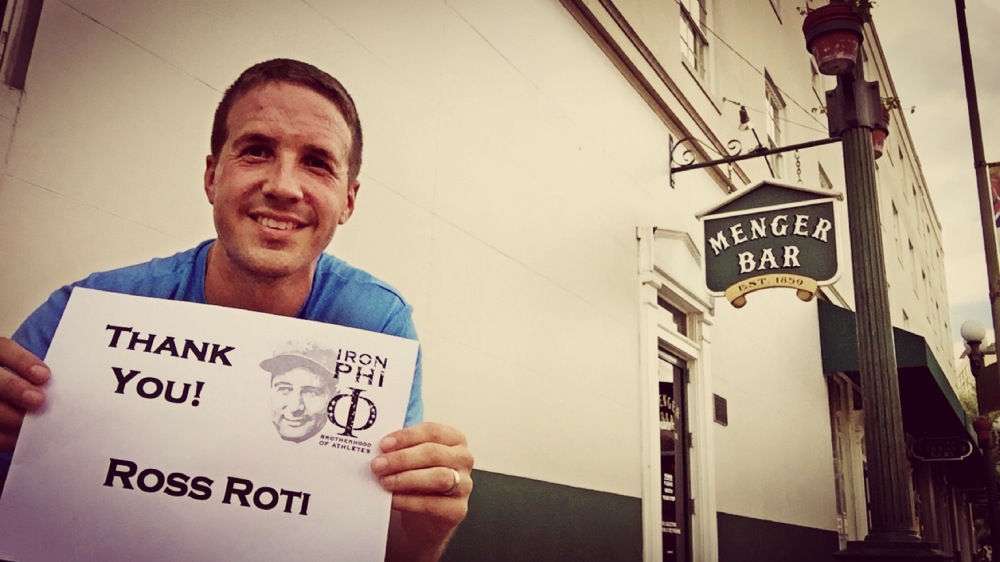 Just around the corner is the famous Alamo, home to the most selfies taken per hour in Texas. This isn’t an official stat for the fact checkers out there, but I feel pretty good about it. The Alamo is obviously a great source of pride for Texans. I won’t bore your, er, impress you with Texas history. Let’s just all appreciate the glory of the Alamo! Here, I thanked proud Texan Mike Hyatt once again for his generous donation. 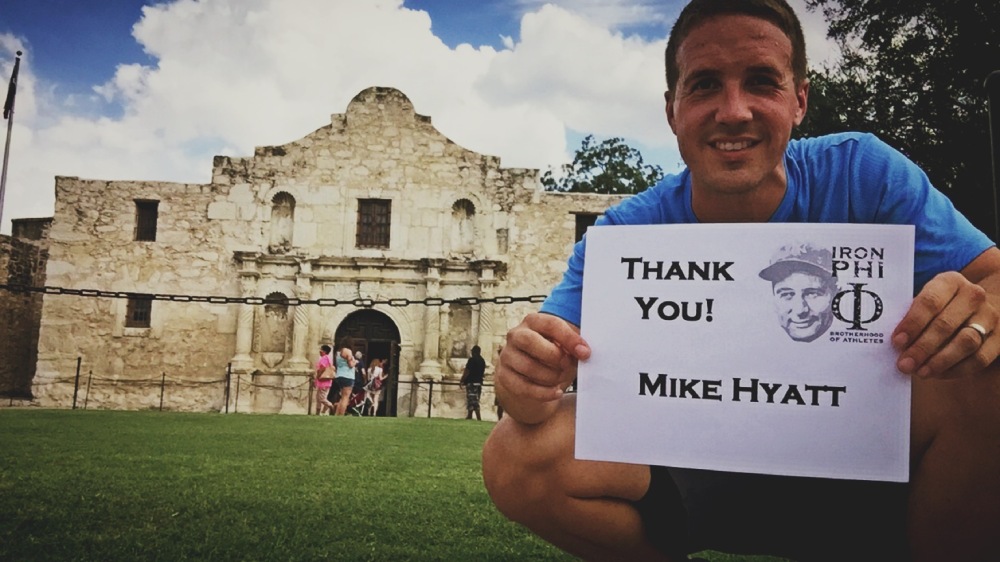 I also thanked my Uncle Tom and Aunt Colleen again. Apparently, I forgot to print multiple signs for them, but let’s talk about my wonderful bubble letters. I’ve been crafting this talent with my little buddy Cal. Having said that, I still can’t figure out how to make a G. It’s like Pac-Man met a 6. 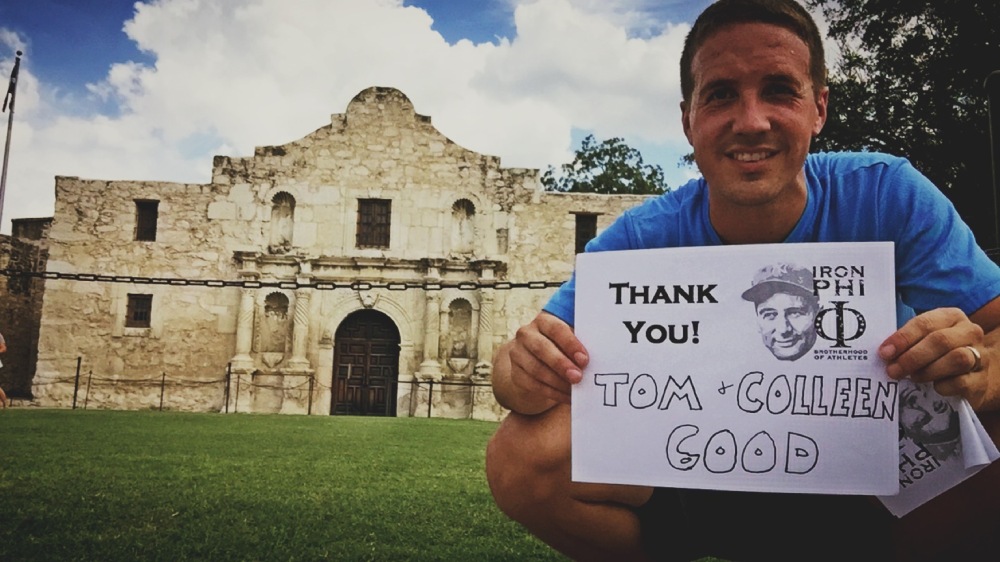 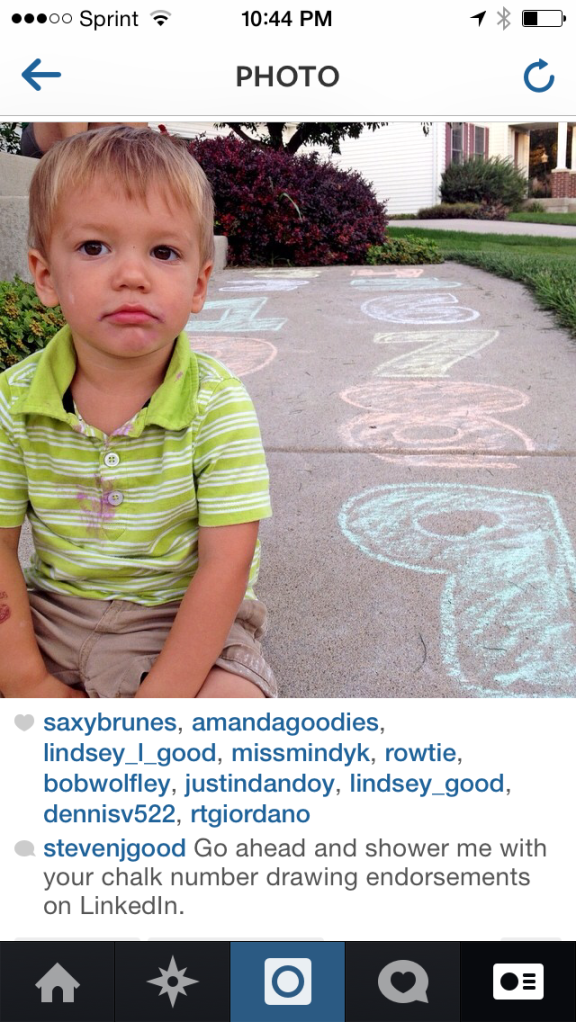 Just across the street from the Alamo, I met a new friend. Meet Juan, mi amigo. I ran by him, laughed and turned around. He was just bouncing the door of his owner’s San Antonio souvenir shop. No leash, great collar and a killer personality. Just me and Juan, hanging out on the ground across the Alamo. Good talk Juan. Keep doing your thing. 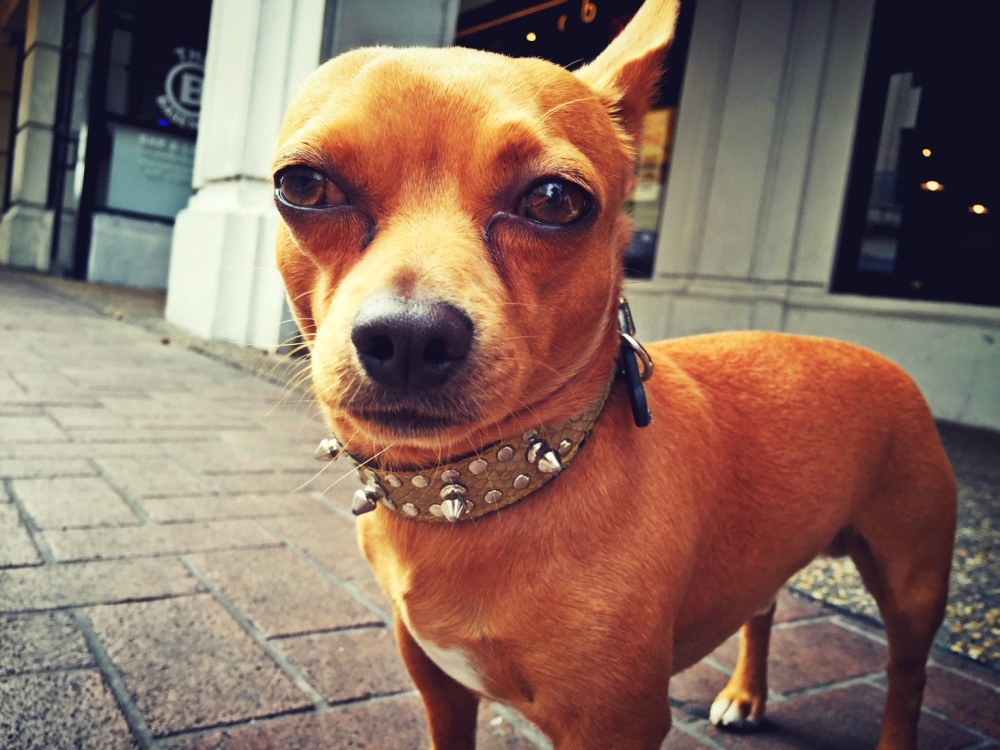 I then hopped down onto the River Walk. Probably the most visited attraction in San Antonio, the River Walk will charm your socks off. A network of walkable sidewalks that butt up to the River are filled with restaurants, bars and shops. It’s a bit tricky to run on the River Walk, so I took the opportunity to cool down a bit and enjoy the scenery. It only took me about 15 minutes to get this well-timed photo! Thanks again to Mike Hyatt! 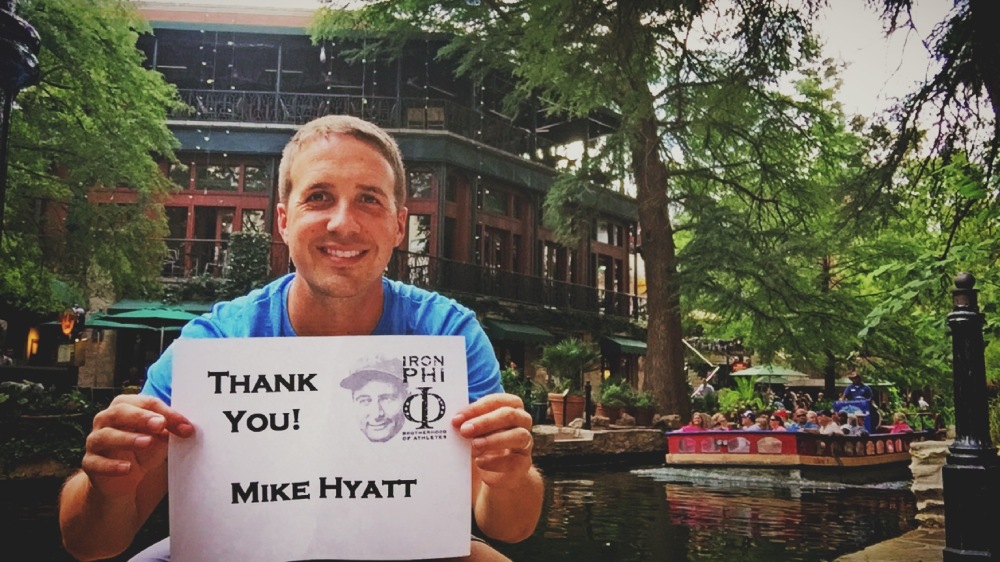 I also found this amazing hotel located on the Riverwalk, where I thanked Bronk & Jess Harms. I owe my Phi Delt membership to Bronk as he was my orientation guide at Iowa State back in 2000. As we say in the fraternity world, we all have our person who led us to our organization. Bronk was my guy, and I continue to look up to him. He and Jess live in Denver with their two adorable kids and one of my favorite dogs in the world. 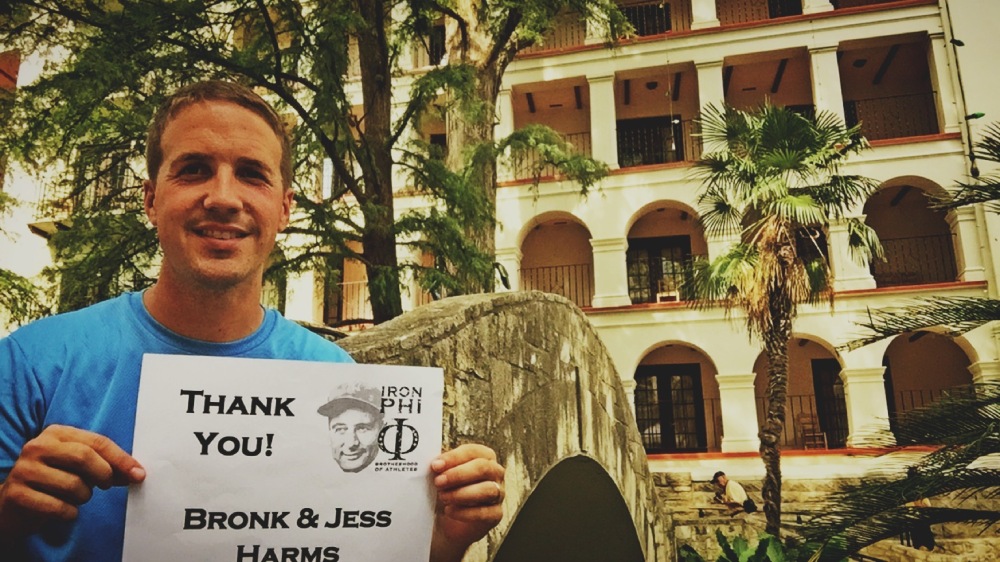 I climbed the stairs back up to the main level of San Antonio and made my way to San Fernando Cathedral. How great is this place? Here, I thanked Craig Schleicher for his donation. Back in 2005, I had the pleasure of spending a few months at the University of Southern California in Los Angeles, recruiting young leaders to rebuild Phi Delta Theta’s California Delta Chapter on campus. Craig was one of the Re-Founding Fathers of the chapter. I’ve been able to stay in touch with a number of that crew, and USC will always hold a special place in my heart. 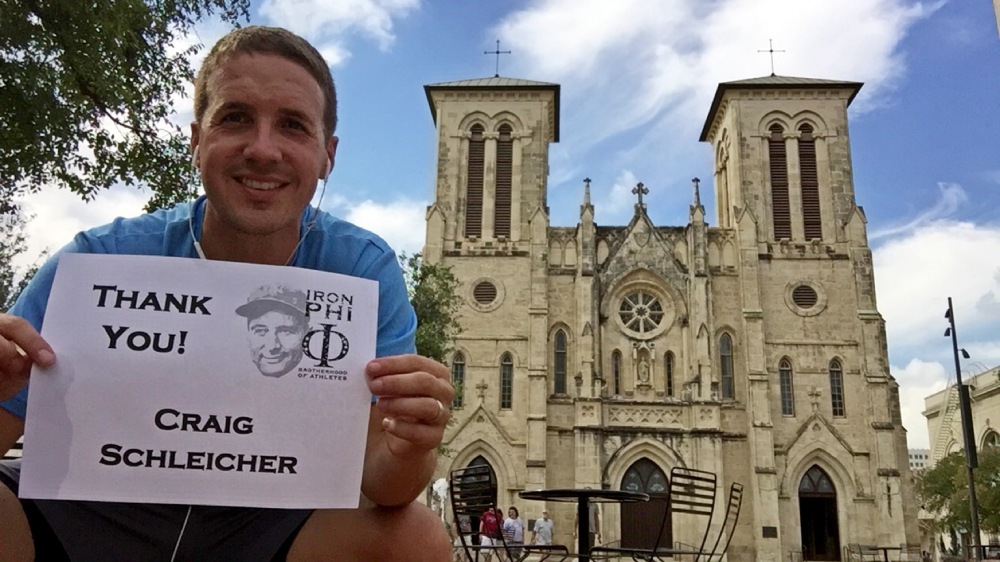 Just across the street is the Bexar County Courthouse, another great building. Here, I thanked Sandy Holliday. I just realized that I misspelled her last name! Sorry about that Sandy! Misspelled or not, I think we can all agree that Sandy Holliday is one great name! Sandy is the aunt of my great friend Travis Griffith. She’ll always be Aunt Sandy to me. 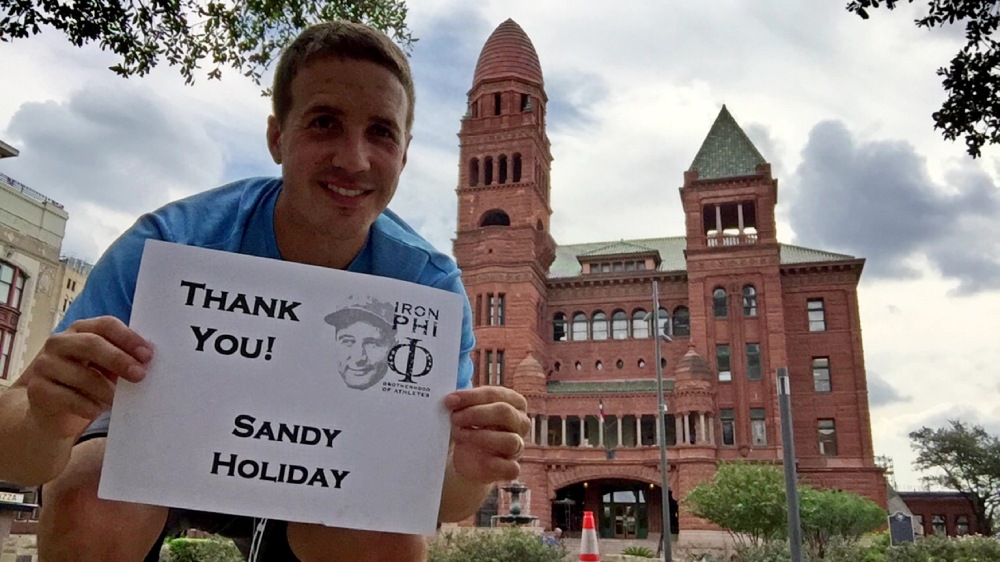 As I ran down the road, this lion mural caught my eye, and I thought it deserved another shout out to my buddy Bret Zimmerman. I know he’ll appreciate it. #LandofLions. Ironically enough, his current Facebook cover photo is of a tiger. Great work Zim. 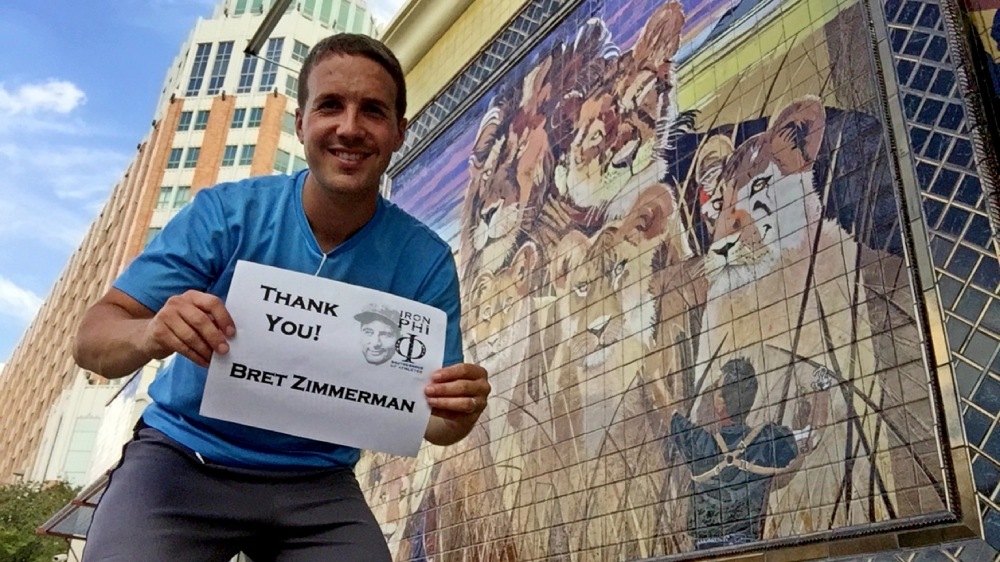 My final stop was Market Square, a neat little district with shops and restaurants. It was pretty empty, but still very neat. I was able to thank my sister-in-law Jadee and her husband Jason for their donation. The two of them just welcomed their first child to the world a few weeks back. I now have a niece to add to the collection of nephews. Tillie and I (and the kids/dogs) can’t wait to meet her. Jadee and Jason are pretty incredible people. Both have military ties and an incredible drive. They now live in Goldsboro, North Carolina and are stationed at Seymour Johnson Air Force Base. 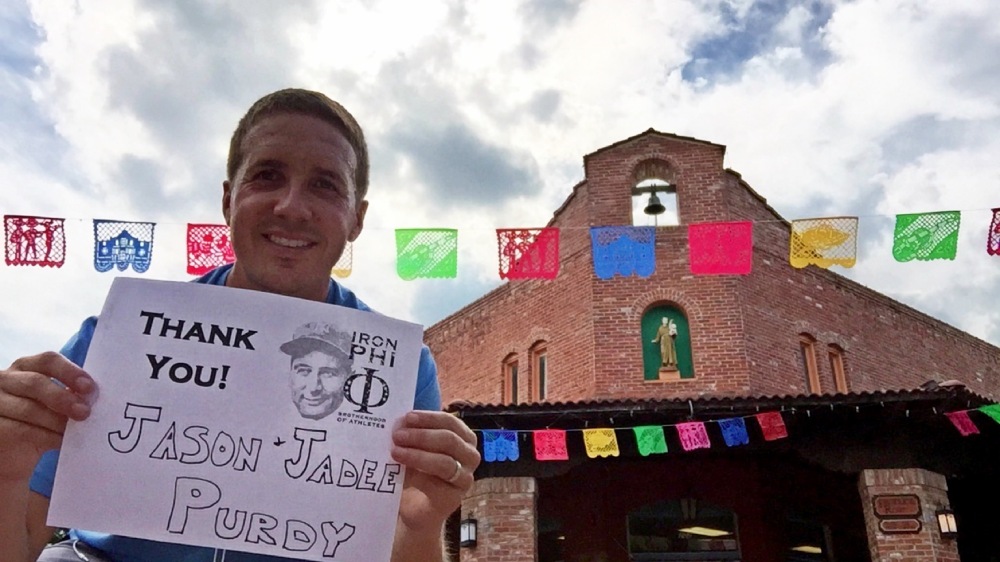 Ironically enough, I was able to meet up with Jason’s parents (Mike & Debbie) that evening for dinner. Hooray for extended family! Not only were they kind enough to support my running trip, they made a 2 hour drive to SA to take me to dinner. They picked me up at the Inn and we headed to Pearl Brewery just north of downtown. What a cool place! The old brewery district has been converted into hip new apartments, shops and restaurants. We chose Cured as our spot, known for “charcuterie, dining and subtleties.” Translated to English, this means that many questions will be asked prior to ordering off their menu. Man, they had great food, and the building is the old brewery administration building. Mike and Debbie are wonderful people, and I admire their love for travel. They subscribe to my no-interstates rule, and they have some great stories about traveling with their kids. As you can see in the picture, Mike decided to take the bone marrow remains from his dinner to his new dog. What a guy! Thanks you guys. You made my day. 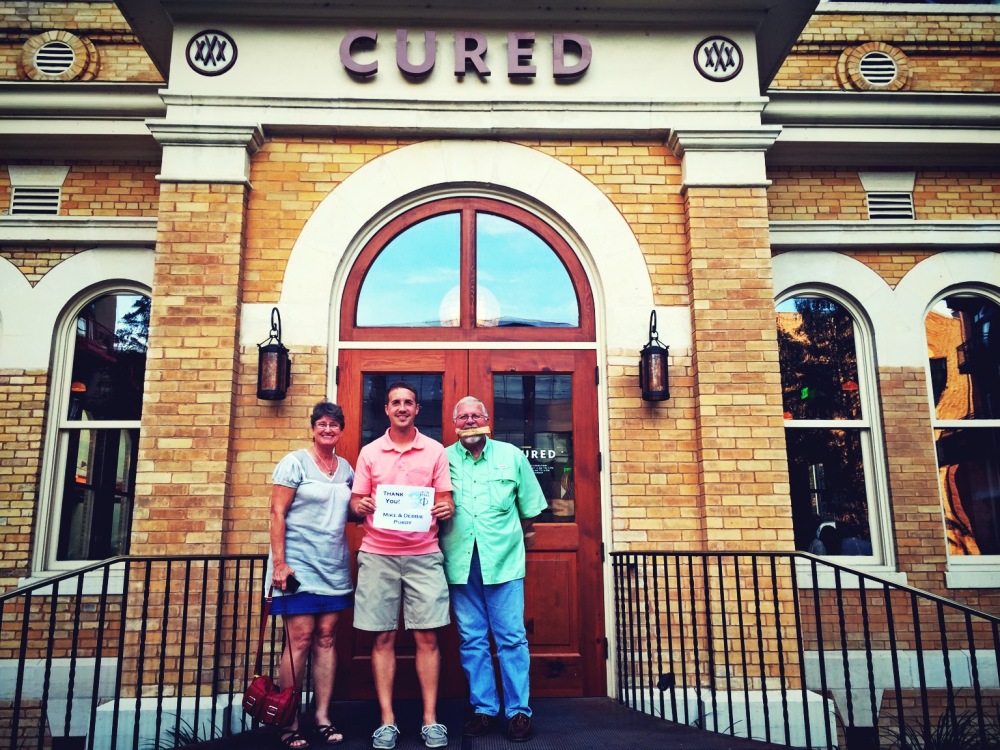 Also notable from our dinner conversation is this amazing picture of Mike hauling his trailer and boat…. at the same time. So great. 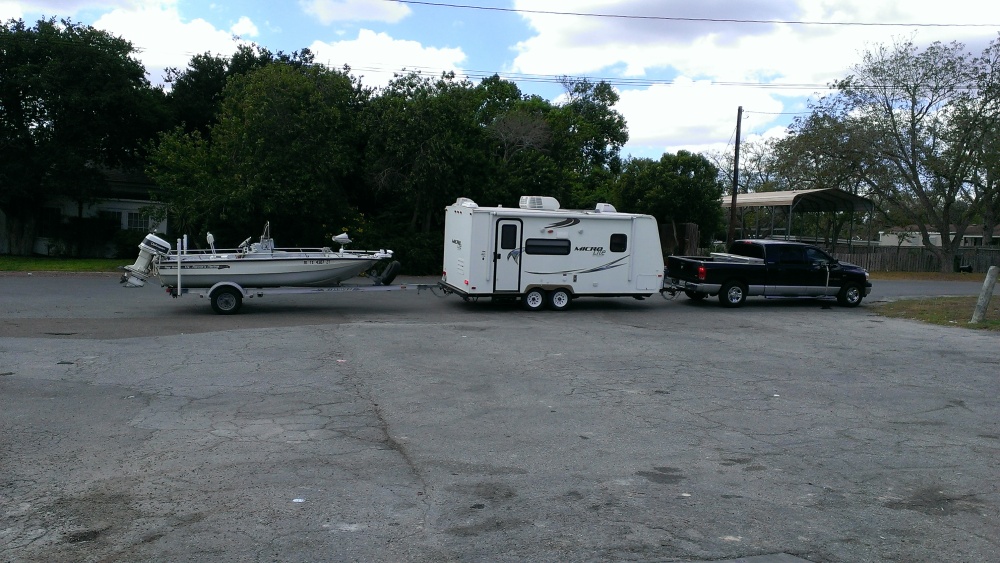 Until next time San Antonio.