On Friday evening, Tillie and I were able to meet up with our great friend Gabby Leon. Gabby lives in Atlanta, and we’ve known her for about six years. Gabby has worked within the Greek community for many years now, and she currently works for Phi Mu’s Headquarters in Peachtree City, Georgia. She is truly a peach.

We settled in at Gabby’s and caught up for a bit before heading out to dinner. What an amazing dinner it was! We ended up eating at Antico Pizza Napoletana. The atmosphere was great. After placing your order, it’s up to you to find seating at the family-style-like setup. Patrons bring their own drinks and five minutes after we ordered, our pizza was in front of us. The pizza, a Lasagna pizza, was the best pizza that I’ve had in years, potentially ever. I was in heaven. 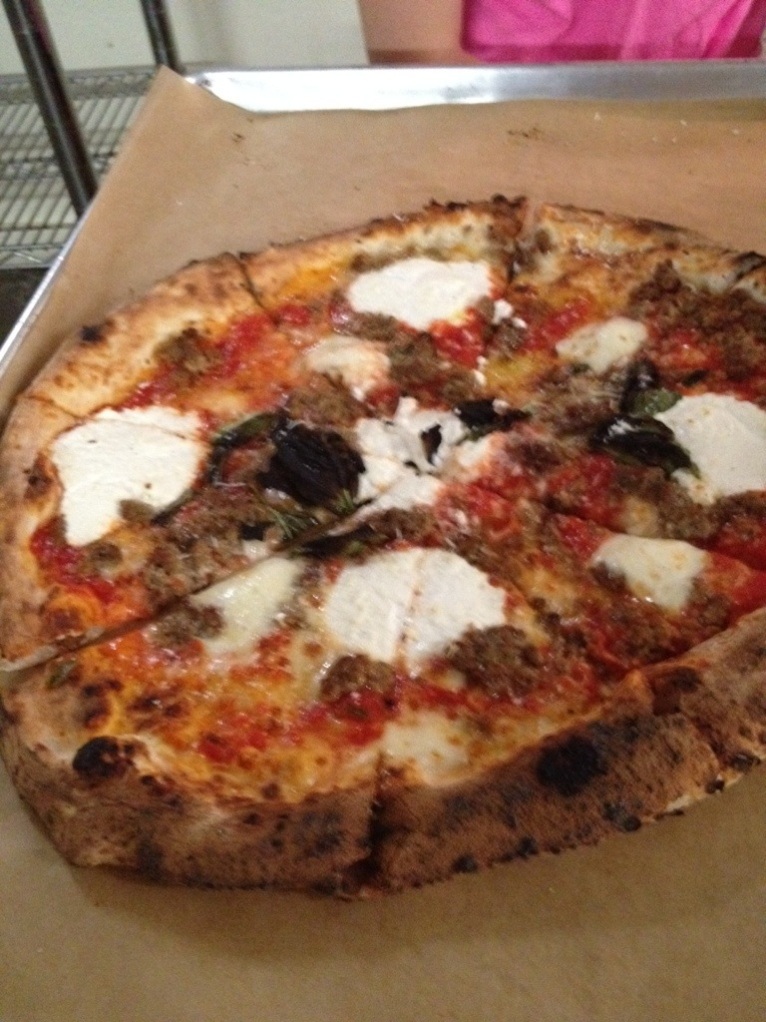 It was early to bed for us as I needed to get one more night of good sleep prior to my final run in Athens.

The next morning, we left Gabby’s apartment, picked up Jeremy Sale and made our way to Athens, Georgia. Athens, the home of the University of Georgia, is another city that has been on my to-visit list for awhile. The drive was about an hour and a half. For the record, I had purchased Megabus tickets for all of us to get to Athens and back that day, but we decided that taking the car would be more convenient.

My initial goal with the Athens route was to start in Athens and run to the Iron Horse statue that I thought was just a few miles out of town. I’m glad we didn’t make this assumption, as the statue was nearly 20 miles from Athens. After stopping to ask for directions, we found the impressive structure!

The Iron Horse Statue was first located at the University of Georgia, but because of numerous pranks by students, the horse was moved away from campus. Here, I was able to thank Mike Hyatt for his donation. Mike is one of Phi Delta Theta’s Province Presidents (regional volunteers), and he lives in Texas. We enjoy chatting Big 12 sports as Mike is an Oklahoma State Cowboy. Mike, thanks for your donation. The Iron Horse was definitely the spotlight landmark for the trip, and I enjoyed sharing it with you. For those who are wondering why an Iron Horse, I’ve raised funds for Lou Gehrig’s disease during this trip, and Lou Gehrig was known as the Iron Horse. It was a very symbolic stop.

As promised, I then rode the horse.

And shared a picture with Jeremy.

Gabby even got in on the fun. 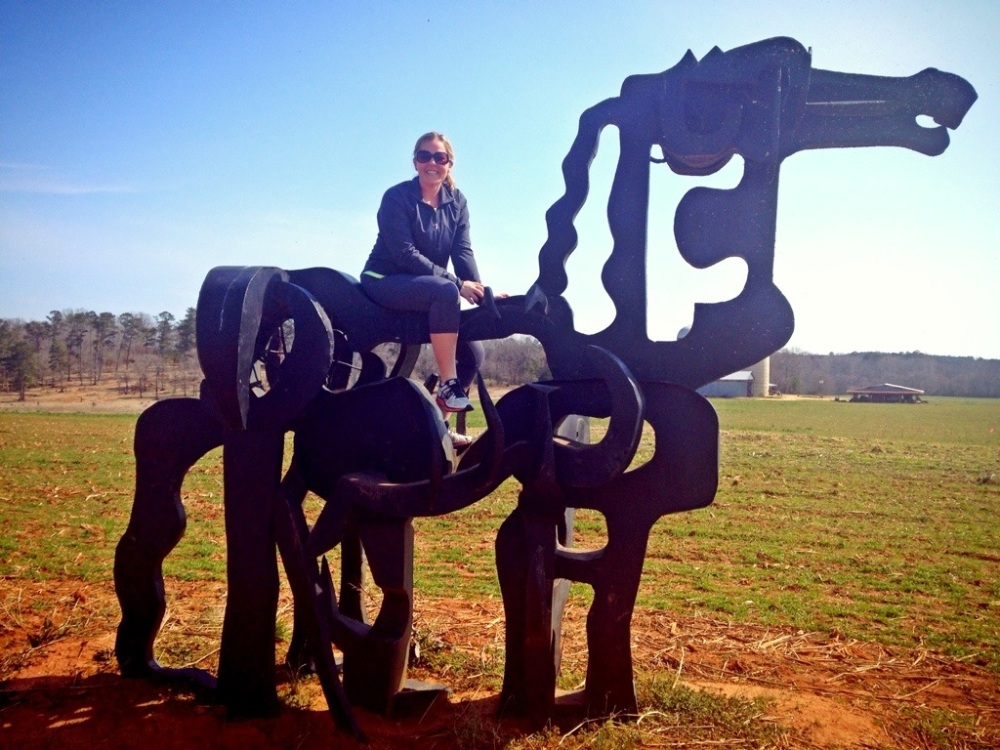 We headed back to Athens to begin our run. Tillie and Gabby dropped us off near campus. Jeremy had the great idea to stop at the Alpha Gamma Delta house to take a picture for Jennifer Mores who is a Georgia Alpha Gam herself. More about Jennifer in a bit.

We then entered campus and headed towards Sanford Stadium.

Sanford Stadium is another great example of a beautiful SEC football stadium built right into campus. Known for its manicured hedges and adorable/ferocious bulldog mascot (Uga) on the sidelines, I can only imagine how amazing a game would be at Sanford Stadium. We tried finding an open entrance, but did not have luck. Here, I thanked my Uncle Randy and Aunt Lori. Randy and Lori are college football fans splitting their energy between rooting for the Iowa State Cyclones and the Notre Dame Fighting Irish. I ran into them during the Notre Dame game I attended in South Bend!

At the stadium, we found a few recycling bins that called for one of my Runner’s Choice photos. I thanked my sister and brother-in-law for the final time. My sister is a dog-lover, so I thought she’d appreciate this photo. Anne & Don, it’s been great to be able to thank you guys each day.

From Sanford Stadium, we found our way to the Phi Delt house where I was hoping to find my colleague Steven Fleming. Steven has been working at UGA throughout the year and has done a fantastic job with the chapter. The chapter house itself blew me away. Here, I took the opportunity to use a Runner’s Choice and thank Mario Villa again.

We knocked on the door to see if anybody was home but nobody answered. I ended up leaving a note for Steven on his car. Sorry I missed you buddy.

We headed back through campus towards the downtown district of Athens. We ran through the original campus in search of a few landmarks. We came across a great fountain. 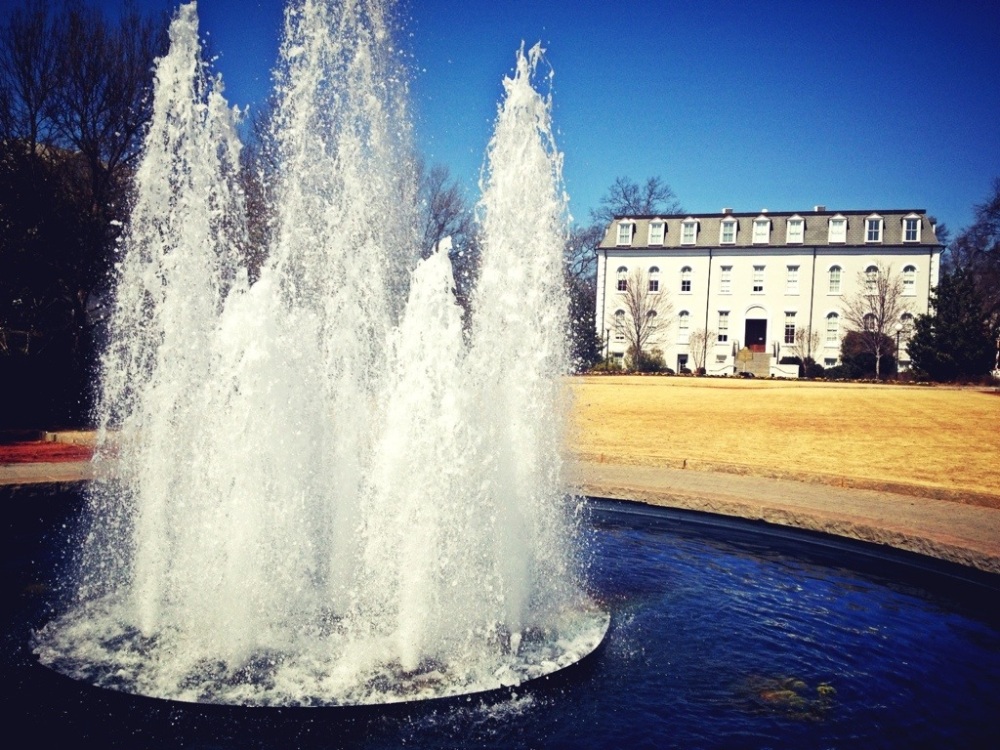 And made our way to the Chapel Bell. Following home football victories, Georgia Bulldog fans make their way to the Chapel Bell to give it a ring. Jeremy mentioned that the line t0 ring the bell can get very long. Traditions like these are awesome. While the rope was not present to ring the bell, I took the opportunity to thank Jon & Ellen Collier. Jon is a former colleague at Phi Delt who is now finishing up his Masters at Bowling Green State University. Ellen used to work at Delta Zeta in Oxford, Ohio and is pursuing her Doctorate at BGSU. I had the opportunity to see the two of them a few months back as I was in Bowling Green for the weekend. I look forward to seeing what the next few months have in store for the Colliers! 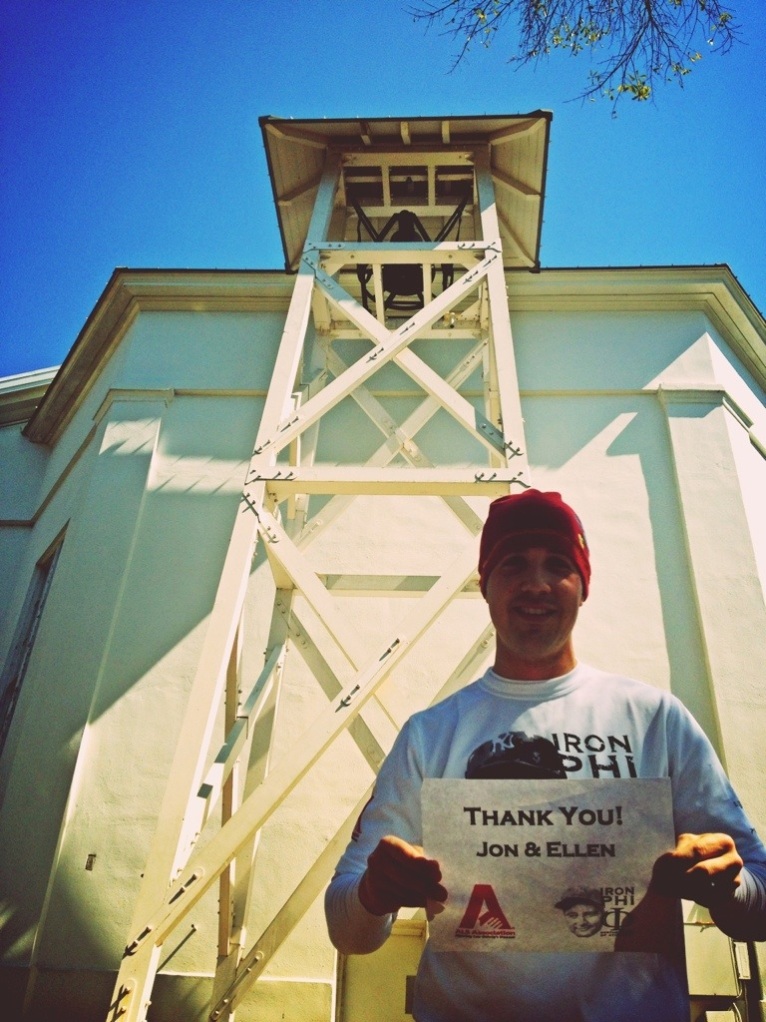 From the Chapel Bell, we ran to the entrance of campus where we found the famous arch. In true Bulldog fashion, we did not walk through the arch; rather we went around it. Since the 1900s, tradition has held that students may not pass beneath the Arch until they have received a diploma from UGA. Here, I thanked Marc & Jennifer Mores. As mentioned before, Jennifer went to school at Georgia and remains a great Bulldog fan. Marc is a fellow Iowa State Phi Delt, and he was my former supervisor at Phi Delt. They have two adorable daughters, Ashley and Stephanie, who are apparently now fans of the Biebs. I support this 100%. Jennifer, it was awesome to see your school. I see why you are so proud! 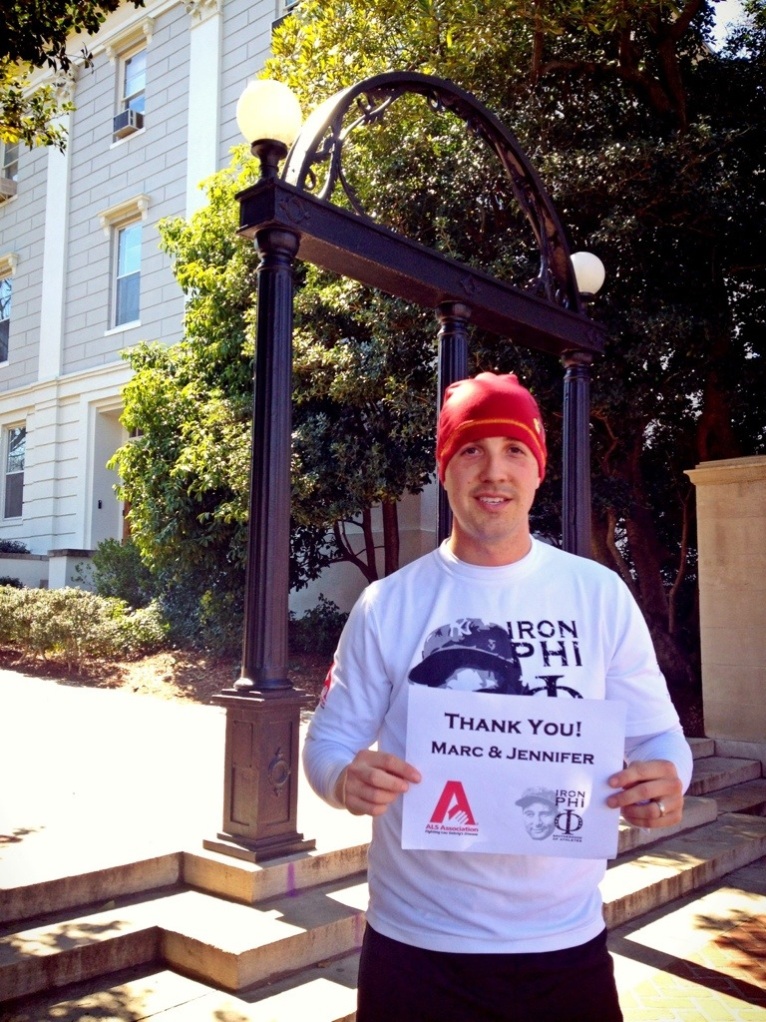 Downtown Athens is amazing. It is full of unique stores, delicious restaurants, watering holes, eclectic music venues and other interesting little places. It is the type of downtown that all college towns should strive to replicate. Jeremy and I ran through downtown towards the courthouse. At the courthouse, I found one of my landmarks – The Double Barrel Cannon. Here, I was able to add to my collection of pictures of me looking into cannons, but this is a first for looking into a double barrel cannon. Crazy stuff. I thanked Haley Abel once again and it was back on the treads. Haley, by the way, your new name is pretty awesome. It has quite the ring to it!

We ran past the newly remodeled Georgia Theatre. Pretty cool.

I found a fun mural.

And then we took off to find one of the most obscure landmarks on my trip, the Tree that Owns Itself. When researching Athens, I kept seeing mentions about this crazy tree. It was too unique not to find. From what I know, a guy named William Jackson left eight feet of land all around this tree to the tree itself. The tree now owns itself, and I guess it just does what it wants?  Really, that’s it, but I had to find it. The tree provided a nice resting place and the opportunity to thank my pal Brent Rauch. I ran with Brent last year in Des Moines and had a blast. Brent is doing great things with his ministry in Ankeny, Iowa, and I always enjoy my time with Bubba.

From the tree, we found the 40-Watt Club, one of Athens’ famous music venues. Athens is known for producing many well known artists and bands including R.E.M., the B-52s, Widespread Panic, Bubba Sparxxx and Drive By Truckers.  The 40 Watt Club was the primary performance space for numerous Athens bands. Here, I thanked Todd & Candice Thomas one last time. 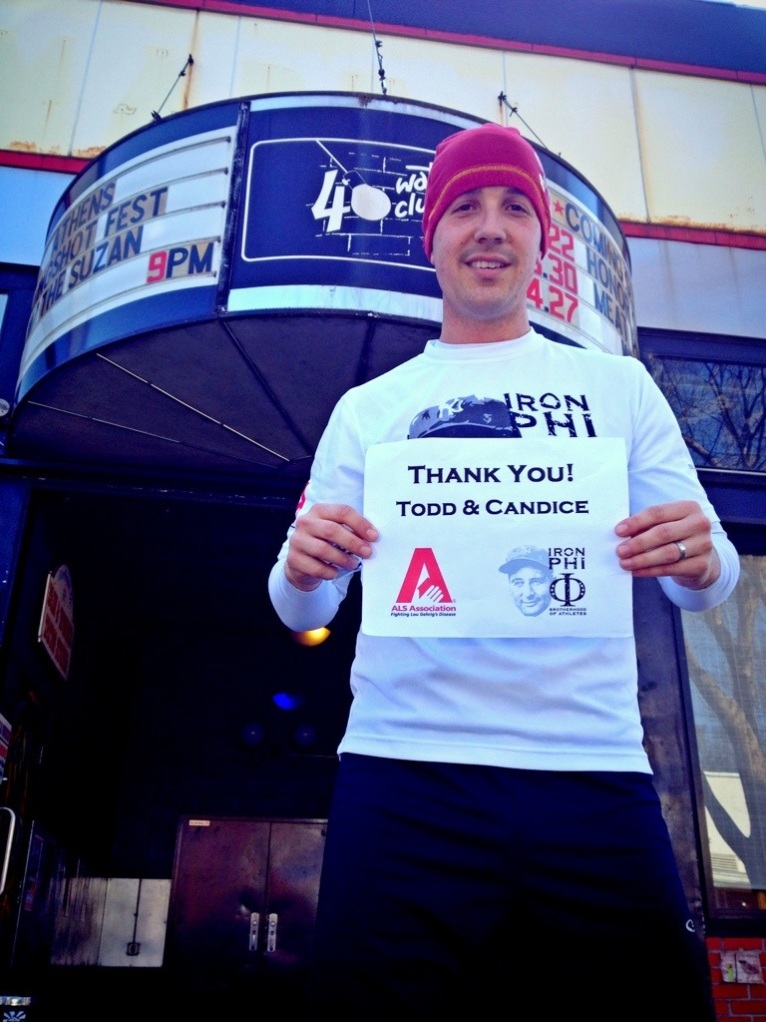 We reached five miles at this point and decided to call it quits. The distance on day eight was just what the doctor ordered. Jeremy and I sat down for a beer at The Globe while Tillie and Gabby finished up their manicures. We then headed to Terrapin Beer Co. for lunch. Wow, do they have great food and a phenomenal beer selection!

With a full belly, we set out to find my last landmark, Uga the dog. While I was unsuccessful in finding the real Uga (apparently he lives out of town), I was able to find one of many giant statues of Uga throughout town. Here I thanked Tillie and I’s great friends Joe & Sarah Wechsler. Joe and Sarah are two of our favorites, and we were able to meet their little Ben a few months back. We look forward to seeing Cal and Ben grow up together. Happy birthday, Sarah! 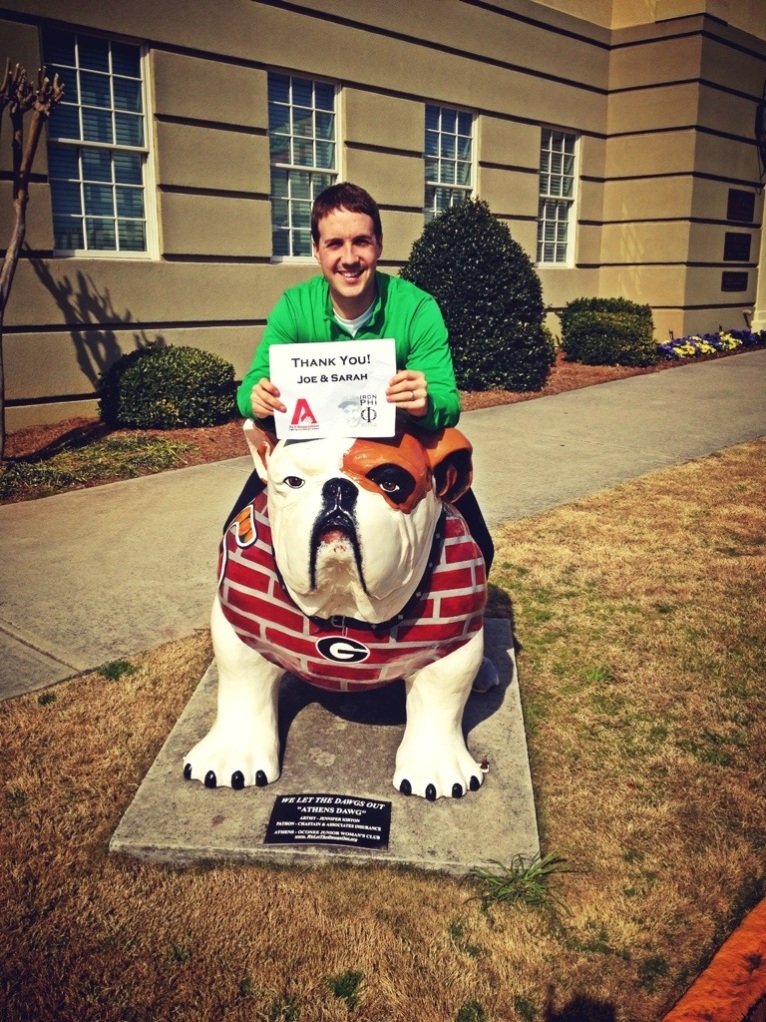 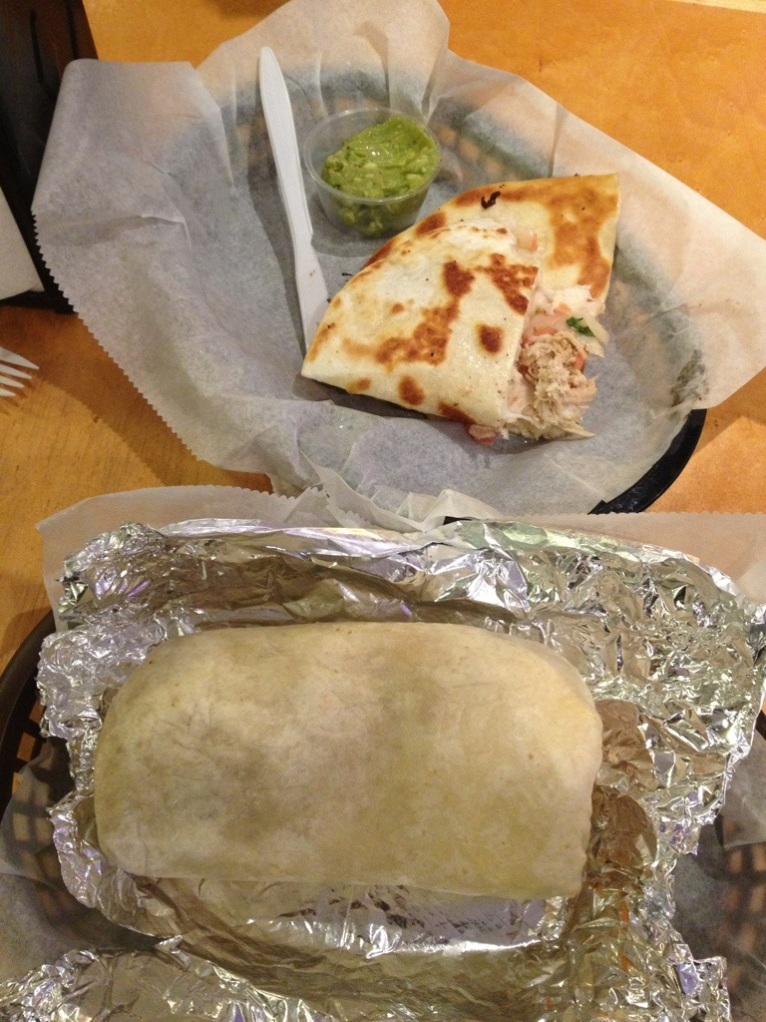 A big thanks goes to Gabby Leon once again for her hospitality. Gabby, it was wonderful to see you.

I’m finishing this final post from Iowa as we’ve made it home safe and sound to the little man and the two canine yahoos. Just in time before another winter storm! I will be doing a recap of this past week in another post, but once again, to all those who helped make this trip happen, thank you. It is a week that I will never forget.