Prior to leaving for this trip, I mentioned that I was most excited about visiting Pittsburgh, Pennsylvania. It did not disappoint. I’ve spent much time in Pittsburgh through my travel with Phi Delta Theta and it has become one of my favorite cities for a variety of reasons. During my first visit to Pittsburgh, I had no expectations. For me, I expected a drury city that would be filled with steel. I quickly realized that Pittsburgh is one of the most beautiful cities in the country with awesome terrain, culture, industry and people. Since my initial visit, I’ve always looked forward to my return. I arrived in Pittsburgh on Sunday evening and was picked up at the bus station by my good friend John Talcott. John and I worked for Phi Delta Theta and worked on the Fraternity’s expansion efforts. When I arrived at the Talcott household, I was greeted by this awesome sign. So cool. Big thanks to John and his wife Kimmy for the unbelievable hospitality.

On Monday morning, I was able to visit the local coffee shop to get some work done. I love visiting coffee shops as they are always unique and filled with friendly people. Tazza D’ora was no exception.

John picked me up over the lunch hour and we headed over to the offices of The Hill Group Inc. John works there and the company is owned by Chris Brussalis who serves on Phi Delta Theta’s General Council. The neat thing about The Hill Group is that many Phi Delts work there, so it was great to catch up with them. Here, I was able to reconnect with John’s mini-me, his very own bobblehead that he earned as ELI Staff MVP at Phi Delta Theta’s Emerging Leaders Institute.

From John’s office we headed upstairs to the office of Jordan Pallitto. Jordan and I first met when he was in school at Allegheny College and I was a Leadership Consultant for the Fraternity. We’ve stayed close since then and Jordan and I can crack jokes for hours. When we arrived at Jordan’s office, we walked in on him reading the thesaurus. Very distinguished. After offering to organize Jordan’s office, we took a quick tour of the building.

During the tour, I was greeted by the man himself, Lou Gehrig. When I had the opportunity to run in the Boston Marathon a few years back, I gave away my favorite bobblehead to one special donor. Jordan won the bobblehead, and I was pleased to see that Lou has been in good hands. 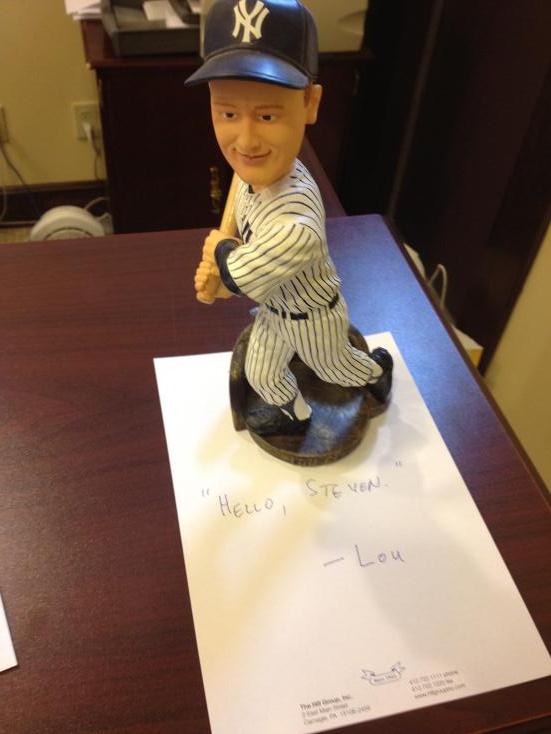 Chris, Jordan, John and I grabbed a quick lunch and then John and I headed down to Heinz Field to start our run. John thought it would be a great idea to park a mile away from the starting point. Despite the extra mile, we were able to snap this picture in front of what I consider the nicest MLB ballpark in the league, PNC Park. Here, I was able to thank Shawn Alexander, and individual I’ve never met. So here’s the ironic twist to this picture. I’m wondering if Shawn is related to Neil Alexander, a Pittsburgh businessman who was recently diagnosed with ALS. If true, I find it very ironic that I selected this picture as a runner’s choice in Pittsburgh. I’d love to know if this is the case. 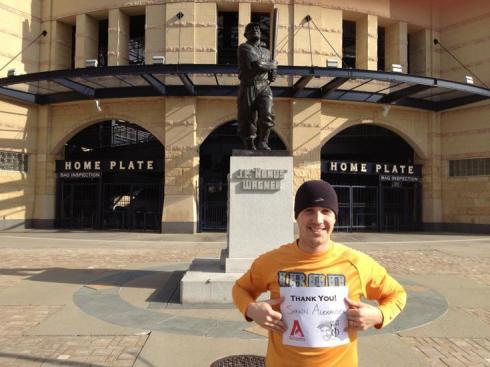 Now, how cool is this. I was greeted at our starting point by Jenni Franz who works for The ALS Association of Western Pennsylvania. I’ve never met Jenni, but she came out to support our group of runners. So cool. She brought with her a few Walk to Defeat ALS shirts that we gave to the students who were running with us. Jenni, thanks for stopping by, it’s one of the highlights of my trip.

Prior to starting our run, I was able hop up on the statue of Mr. Rogers to thank Lynn Chapman. Lynn is great friend who I initially met through Phi Delta Theta’s partnership with Group Interactive Networks. Lynn currently works for Zeta Tau Alpha and I was able to connect with her when I ran the Mercedes Half Marathon in Birmingham, Alabama. As a wonderful mother, I thought it was fitting to thank her with Mr. Rogers. Did you know that Mr. Rogers was from Pittsburgh and filmed his shows here. I had no idea.

We had a crew with us for today’s run. Phi Delts from the University of Pittsburgh and Robert Morris joined us in the run. I was pumped to be running with these guys. A big thanks goes to John, Jonah, Corey and Bob for running with John and me today. 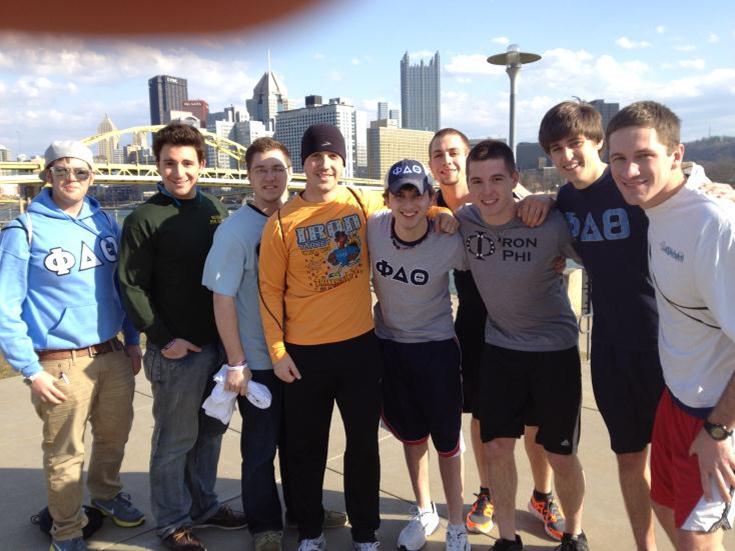 We took off from Heinz Field and headed across one of Pittsburgh’s many awesome bridges. Here, I was able to thank John Talcott.

Across the bridge, I was able to thank an individual in a fashion that won’t be too popular with my Pittsburgh friends. My colleague Alex Stefanic is a Denver Broncos fan and requested that I “Tebowed” in front of Heinz Field. I was able to accomplish the feat. God bless you Alex for your generous donation. Sorry Steelers fans.

We then headed to Point State Park which is the confluence of three rivers in Pittsburgh – the Ohio, Allegheny and my personal favorite, the Monongahela. Try saying that one three times fast. Here, I was able to thank Michael Hyatt again for his generous gift.

We continued dahntahn (Pittsburghese for downtown) and snapped this pic in the courtyard of the many PPG Industries building. Talk about awesome architecture! Here, I was able to thank Kerrie Copelin who is the Executive Director of the ALS Association’s New Mexico chapter. Thank you Kerrie for your gift!

From dahntahn we crossed the river again and headed towards the Monongahela Incline. So the cool thing about Pittsburgh is that there are a few inclines that once served to cart steel workers from downtown back to their communities situated in the hills. Today, the inclines offer a fun ride for tourists to the top of hills for great views.

We hopped on the incline and headed to the top of the hill. On the incline, I was able to thank my uncle and aunt, Tom & Colleen Good, once again.

Following our ride on the incline, we made the long trek to the University of Pittsburgh. Pittsburgh is full of hills and we hugged one of them the entire way up to campus. The University of Pittsburgh holds a special place in my heart as I was able to help start the Phi Delt chapter on campus. The guys who started the chapter were awesome, and I always enjoy visiting this awesome campus. Speaking of awesome, the campus’ panther statue rocks. Here, I hopped on for a ride and thanked Jordan Pallitto in the process.

John and I crossed the street to snap a picture in front of the Cathedral of Learning, in my opinion the coolest structure on an American college campus. Here, I was able to thank Nathaniel Muzika, who was one of the individuals who helped start the Phi Delt chapter on campus.

I had a surprise waiting for me at the end of our run which made my day. About 20 brothers from the Phi Delt chapter at Pitt stopped by to say hi. It was an absolute pleasure to talk with these guys and get this, they even made a $50 donation to my effort. Great guys.

John and I said our goodbyes to the guys and jogged to a place where one should celebrate an eight mile run – the famous Primanti Brothers restaurant. If you’ve never had a Primanti Bros. sandwich, put it on your list. Fries and coleslaw on a sandwich, yes please. Here, I was able to thank Kevin Bazner, a Pittsburgh native and former colleague. I always enjoy thanking donors from that particular city. Thanks Kevin! 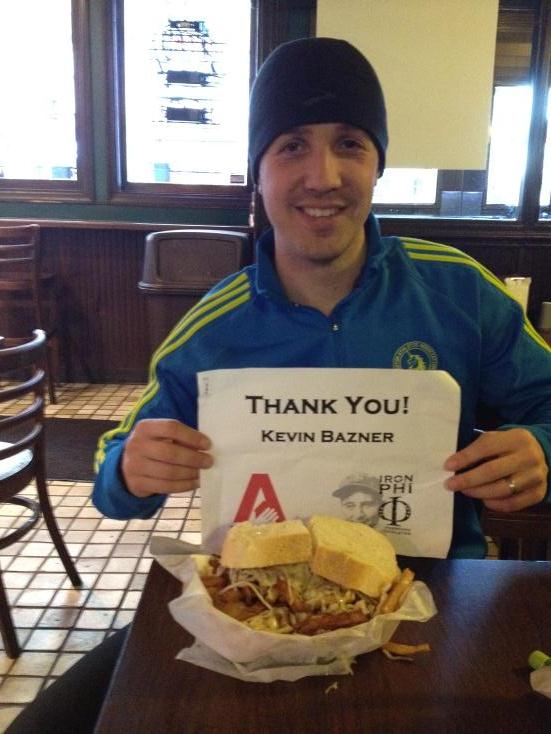 Of course, we had to wash down our sandwich with Pittsburgh drink of choice, Yuengling Lager. So good.

Here’s a close up of the sandwich. So healthy.

From Primanti Bros. we headed towards our bus to get back to the car. On the way, John pointed out this awesome live mural at PNC Banks’s headquarters. How cool is that, a live mural!

Overall, Pittsburgh was awesome. I can’t wait for my next trip back. To New York City!