I arrived in Chicago at 7:30pm on Thursday evening and made my way to Andy Tomka’s house.  Before leaving Union Station, I took a minute to admire its beautiful structure.  I think train stations are the coolest.  So much better than airports.

Andy, his girlfriend Liz and I went out for a quick bite that evening, but it was early to bed to rest up for Friday.  I was able to get another eight hours of sleep, which was glorious.  In the morning, I woke up to a ground full of snow.  My initial thought – This will make for awesome pictures! Andy prepared his standard breakfast (oatmeal, eggs and tea), a breakfast that provided great fuel for our run.  I learned over breakfast that Liz attended the Columbia University School of Social Work and earned her master’s degree there.  It was fun to hear about her experience and the good work she is currently doing in Chicago.

After breakfast, Andy and I left for what we thought would be a 6.7 mile run.  More on this later.  We took the ‘L’ into town and started our run at the renowned Cloud Gate, or “The Bean” at Millennium Park.  The snow from the night before left an awesome effect on the Bean.  Pretty cool, eh?  Here, I was able to thank Andy & Kelsey Tu again for their donation to my effort. 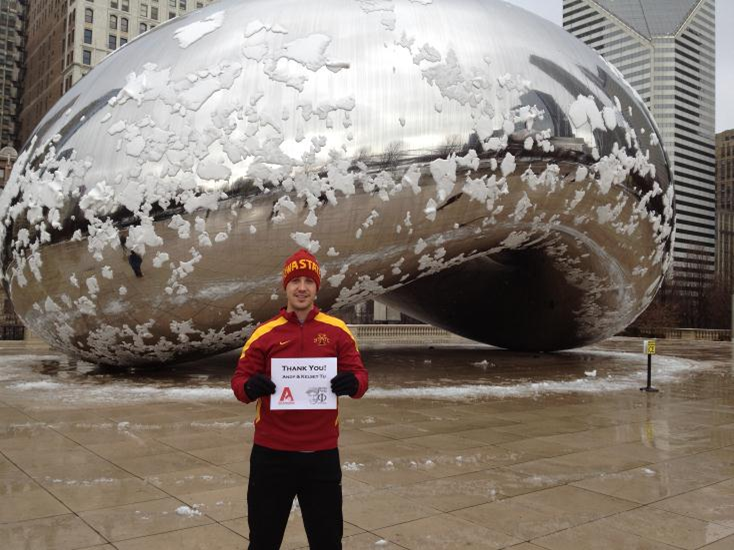 From the Bean, we took off towards the water on the way to Navy Pier.  Bring on the wind.

We arrived at Navy Pier and I was able to thank Jon Rogowski, a colleague at Phi Delta Theta.  Jon is a Chicagoan, so it was fun to share my exploration of his city with him.

After a quick pit stop inside the building at Navy Pier, we were about to head back outside until I saw this awesome picture of Michael Jordan.  A picture with Jordan in Chicago, a must!  I was able to thank Jeremy Sale with MJ in the background.  Jeremy and I ran the Mercedes Half Marathon together in Birmingham, Alabama last February and he taught me an important running lesson along the way – learn how to pace yourself.  I grew up a Chicago Bulls fan and consider myself fortunate for being able to watch Jordan for many years.  Having said that, I lost a little respect for MJ upon watching his Hall of Fame acceptance speech.

Back outside, I spotted a gent lounging outside with an open couch next to him.  It look like he needed company.  I learned that this man was a guy who has made many a dinner salad a delight for years, Mr. Paul Newman.  I thought it was cool to randomly come across a famous philanthropist along the way.  The life and legacy of Paul Newman is a great one.  I decided to capitalize on one of my runner’s choice pictures and thanked Jamison Arends.  I didn’t think about it at the time, but I’m glad I selected Jamison for this picture.  Jamison, is a young philanthropist himself, having recently co-led the Iowa State Dance Marathon’s record $380,000+ 2012 event.  He along with his co-chair, Szuyin Leow really recharged my Dance Marathon batteries.  Thanks guys.

The next stretch on the run took us along Lake Shore Drive and Lake Michigan. Check out these waves!

Along the lake, I spotted a set of murals that were created in 2011.  They were awesome.  I had to use the famous Chicago Dog in one of my runner’s choice pics.  I was able to thank Rachel Schindler.  Rachel and I are working to reconnect Iowa State Dance Marathon alumni.  She’s been great to work with, and I wish her the best of luck when she partakes in the Chicago Dance Marathon.

Another great mural along the way.  We got a burst of energy from Uncle Sam’s presence.

Our next stop was the Lincoln Park Zoo.  As many of you know, I dig animals, so this was fun.  I think it’s fantastic that Chicago has free-to-the-public zoo of this magnitude.  We headed straight for the Gorilla cages (why wouldn’t we) to check them out.  Here, I was able to thank my sister and brother-in-law again with my buddy Cliff in the background. 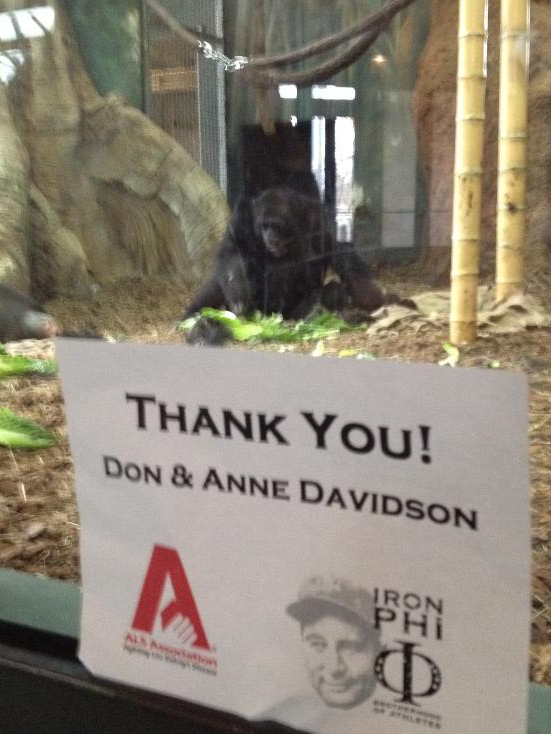 Another great pic from the zoo.

Andy spotted the Lincoln Park Conservatory, so we took a peek.  Here, I was able to thank Scott Mietchen for his support.  Scott is the current president of Phi Delta Theta and has been a friend and mentor to me for many years now.  Unfortunately, we selected the worst color combination for my in-your-face red Cyclone gear. Note to self, greenhouses will leave you twice as sweaty as when you entered. 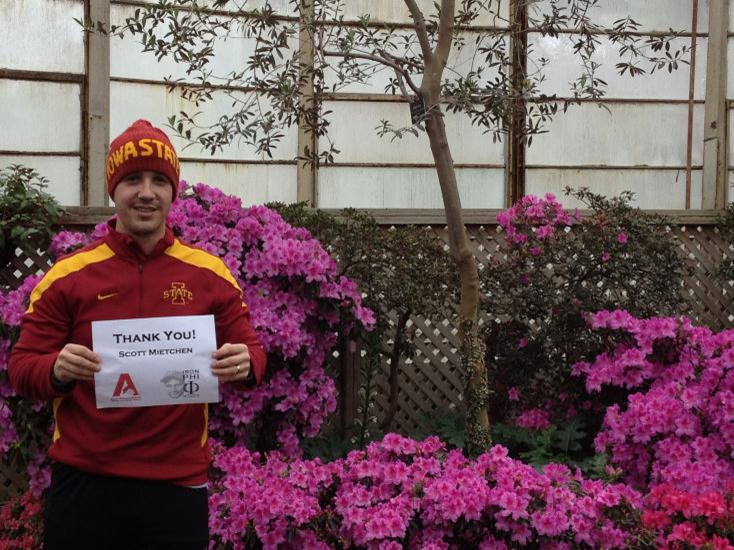 After the Conservatory, we headed for our final destination, Wrigley Field.  I knew we were getting close when I started to see these.

We finally reached Wrigley Field and looked at the GPS. Our run ended up being 8.81 miles.  We felt pretty great about our accomplishment, and surprisingly I feel pretty good hours later.  Here, I was able to thank Moe Stephens, an avid Chicago Cubs fan.  Moe’s been a great coach to me as I develop GrassrootGive, as he and his wife Allison have been successful in launching their own business in the Seattle area.

Andy and I capped off our afternoon with a warm roast at Starbucks.  We recouped a bit and then headed back to his place.  A big thanks goes to Andy and Liz for their hospitality in Chicago. I spent the afternoon in a coffee shop catching up on work and writing this post.  At 5:30, I made the trek back up to the Lincoln Park area to meet up with Mindy Christensen and her boyfriend Marshall.  Mindy is  a great friend from high school, and it was awesome to reconnect with her.  We always have many laughs when we hang, and tonight did not disappoint.  We forgot to snag a pic over sushi, so we resorted to the bathroom mirror pick of the three of us.  I told you this would be my decade for bathroom mirror pics.  Hilarious.

Saturday will be my most hectic day. I leave Chicago at 7am, arrive in Indianapolis at 11:15am, run Indy, hop back on the bus at 3:20pm and arrive in Cincinnati at 6pm.  I look forward to seeing my buddy Graham and attending the Xavier vs. Richmond game tomorrow at the Cintas Center.