I always thought Indianapolis was the perfect city to run in.  I say this is because I can easily get in a 20 miler  without crossing any streets.  It’s also relatively flat, so you have your advantages there, but disadvantages if you’re training for Boston.  The only problem with this city is we’re so close-minded.  We’re not open to new ideas whatsoever.  Vegan restaurants?  Are you kidding me?  We need KFC and White Castle at every corner.  We aren’t a very active city, although we are trying to change that.  Bicycle lanes have recently just been built, but no one (who isn’t active) likes them.  And since we aren’t a very active city, it’s weird to see half-naked fit people running around, so weird that if you’ve never seen one, it’s mandatory to yell something.  Sometimes it’s racist, sometimes it’s weight-related, sometimes it’s just laughs.  See the Tally Board I’ve been keeping since March.  17 seconds into my run this afternoon I got, “Run Forrest, Run!”  Seriously… that movie is OLD now, but good joke.

I think we have a lot of work to do, but I think there is a lot of room to make a difference in this city.  We just need people to be open to trying new things.  I believe it’s possible to start with a wider variety of healthier restaurants.  Just recently, Indiana was listed as the 8th state with the highest rate of obesity.  Believe it or not, I get told all the time I need to eat more.  They have no idea that I could eat them under the table… but it won’t be at McDonalds… and I’m not into cannibalism.  Child obesity is a problem. It’s sad really; they don’t think about the food they eat, and the parents think it’s just cheaper to go buy some cheeseburgers from the cheeseburger factory, than to go to the grocery store and buy healthier food.  I don’t remember any overweight kids in my class throughout grade school.  For my 30th birthday, I donated $30 to the official charity of Dean Karnazes, Karnokids.  Onto the run!

My 30 mile run seemed to be split up in 3 sections.  The first section took place downtown in the city.  The second section took place on the canal, the White River Greenway, and the canal tow path.  The third section took place in Broad Ripple and the famous Monon Trail.  The run started at 8am with my awesome girlfriend crewing me on her bicycle.  She even made me a race bib for the event! I started out very slow, I had never run further than 26.2 miles, and I didn’t want to kill my legs, so conservative was the name of the game.  I wanted to hit as many landmarks in the city that I could.  Within the first 10 miles, I ran to Fountain Square, which is a neat little town where you can go duckpin bowling or swing dancing, then I ran to the Colts stadium, then to Victory Field, home of the Indianapolis Indians, then to Bankers Life Fieldhouse, home of the Indiana Pacers, the State Capital, and Monument Circle.  It was pretty stressful running through all that work traffic.  Too much stop and go, but it was good to have a change of scenery.

The next section of the run is part of my normal everyday route, a 2.6 mile loop known as the downtown canal.  I’ve been running on the canal for years, I’m pretty sure I could run it blindfolded.  This is where most people downtown exercise.  I made my way to the end of the canal and continued across a bridge over the White River to a path that runs behind the Indianapolis Zoo.  Eventually I made it up to the White River Greenway.  I love the greenway; it’s so peaceful, no one is around, it’s a great time to think.  The greenway connects to the Canal Tow Path, which is a dirt path that runs by the Indianapolis Museum of Art, 100 Acres, and Butler University.  My girlfriend hopped off her bike and ran a mile with me around 100 Acres, then we ate a bagel, stretched and continued on up to Broad Ripple.  This was around mile 15.

I couldn’t wait to get to Broad Ripple, I was starting to get hungry.  I had a choice, I could either stop and eat at mile 19 or run a little bit farther north, double back and then eat.  I chose the latter, because I think it would’ve been pretty tough to go farther out of the way on a full stomach than on an empty one.  I’m glad I did.  It was around mile 23 that we ate lunch at a little place called 3 Sisters Cafe, as seen on Diners, Drive-ins and Dives.  This is one of the few vegan-friendly restaurants in the Indianapolis area.  She had the tofu scramble with a cup of coffee, I had a black bean burger with a cup of soup and coffee, and we split some hashbrowns.  It was delicious!  I was feeling pretty tired at this point, not to mention full. 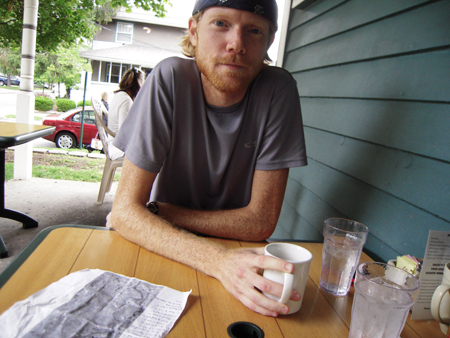 The next 7 miles were pretty boring.  The Monon Trail is just a straight shot, paved path that runs North and South, it used to be an old passenger railroad.  At mile 26, I picked up the pace.  My last four miles were 6:26, 6:13, 6:06, 5:51.  I finished strong, I felt great, and it was an amazing way to start my 30th year!  Total time was 3:56:56 (7:54 pace).  This 30-miler also marked my 8,000th Consecutive Mile in my running streak since October 2009.  I couldn’t have done it without my crew, she helped me out so much.  Not once did it seem very hard. If anything, it was good practice for an ultra some day, and for her too, if she decides if she wants to crew for me! She kept bugging me with questions of how my stomach felt!  Overall it was a great day. 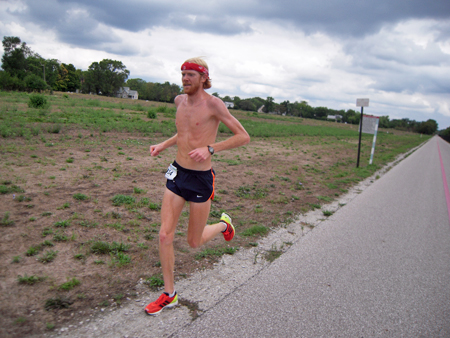 Indianapolis isn’t a bad city, we just need some time to get our act together.  I like to promote fitness: the more often we’re seen, the more normal we seem.  Most people here don’t like to run.  They don’t have a reason why, they just don’t like it, but that’s not a good enough reason.  Try it.  The majority will tell you that anyone they ever met who ran has knee problems.  The thing is, anyone here I’ve met who doesn’t run, is either overweight or on the verge of becoming obese.  Try it now before it gets harder, and I bet you’ll find a reason why you like to run.

We all run for a reason.  Some run to lose weight, some run to relieve stress, some run because they just want to keep fit.  I run because my mom made me when I was 16.  I was at least given a choice though, I either had to join the swim team or run track.  I chose track, eventually running for a division 1 team in college for two years.  Thanks, mom.  Several years after my mom forced me to make a life changing decision, my grandpa passed away, and the last thing he told me was, “Don’t stop running.”  So I couldn’t.  Thanks, grandpa.  I was in the best shape of my life up to that point, but a year or two later I gave up due to a back problem that caused my entire body to be out of whack, resulting in a ton of pain in my knee.  I was out for five years mentally and physically.  Thank you, back problem.  I developed a pulmonary embolism in 2006, I was coughing up blood and apparently I now have dead spots in my lungs.  Thanks, blood clots.

It was a very stressful time, and I needed to run.  I tried throughout that five year taper, but every time, I had to stop.  Then one day in 2008, I decided no matter what, no matter how much pain I had to go through, I was going to run.  I started out a mile at a time.  It hurt, A LOT, but at least it was a mile.  I did this for a week and then decided to give 2 miles a shot.  I did that for a week or two, and then one day I tried to go just a little further and I felt my back pop.  I knew it had fixed itself.  When winter hit that year, I started taking days off because it was too cold, then days turned into weeks and I got lazy.  Well that much time off put me back on the bench.  Come spring, I had a lot of painful work to do, but this time it was twice as hard.  Eventually I made it (again), and began running races with three good friends of mine: Mike and the Fetro brothers.  I thank them for getting me back into racing.

I never wanted to be benched ever again, so in October of 2009, my running streak began.

I’ve met some amazing people since I started my streak.  One day on a run I met a 60 year old guy named Kim.  I recognized his shirt and noticed he ran in the Monumental Marathon over the weekend.  We chatted for about 20 minutes and soon realized we both worked in the same building.  Since then we became great friends and often run 10 milers on Saturday mornings.  He always gives me great advice, because he has been in my shoes, he has been to Boston, he knows what running is all about.  The greatest advice he ever gave me was, “Running will keep you young.”  Thanks, Kim! 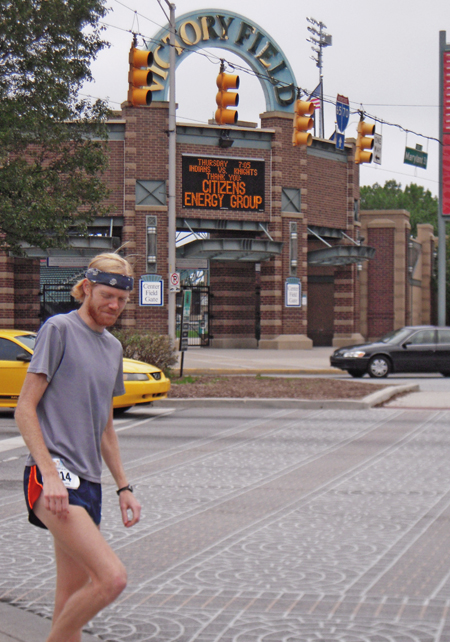 I also met a great group of guys who run for the Athletic Annex here in Indy.  Occasionally I’ll jump into their workouts with them.  They are all very supportive of one another, and come race day, we work together (sometimes).  I suggest if you hate running, then find people to run with.  Thanks, Annex crew!

I have changed a lot since the start of my streak.  I used to eat whatever I could find, and normally it wasn’t good.  The thing about running is, the more you run, the more you can eat.  I didn’t think about what I consumed, until my girlfriend became vegan.  It has been over a year now since she made that decision, and she educates me how important food is, especially for someone who burns it like fuel.  I feel like I have more energy than I used to, and I know the food I eat nowadays is the main contributor.  She is very supportive of me, and I’m glad she shoves better food down my throat, so thank you! 😉

Without all the people I’ve thanked, it sure would have been a tougher road to get here right now.  Everyone has a reason why they run, and I just happen to have a lot of reasons and a lot of people motivating me to keep going.